Mystery Train: Concordia Theatre takes the audience for a ride on the Orient Express 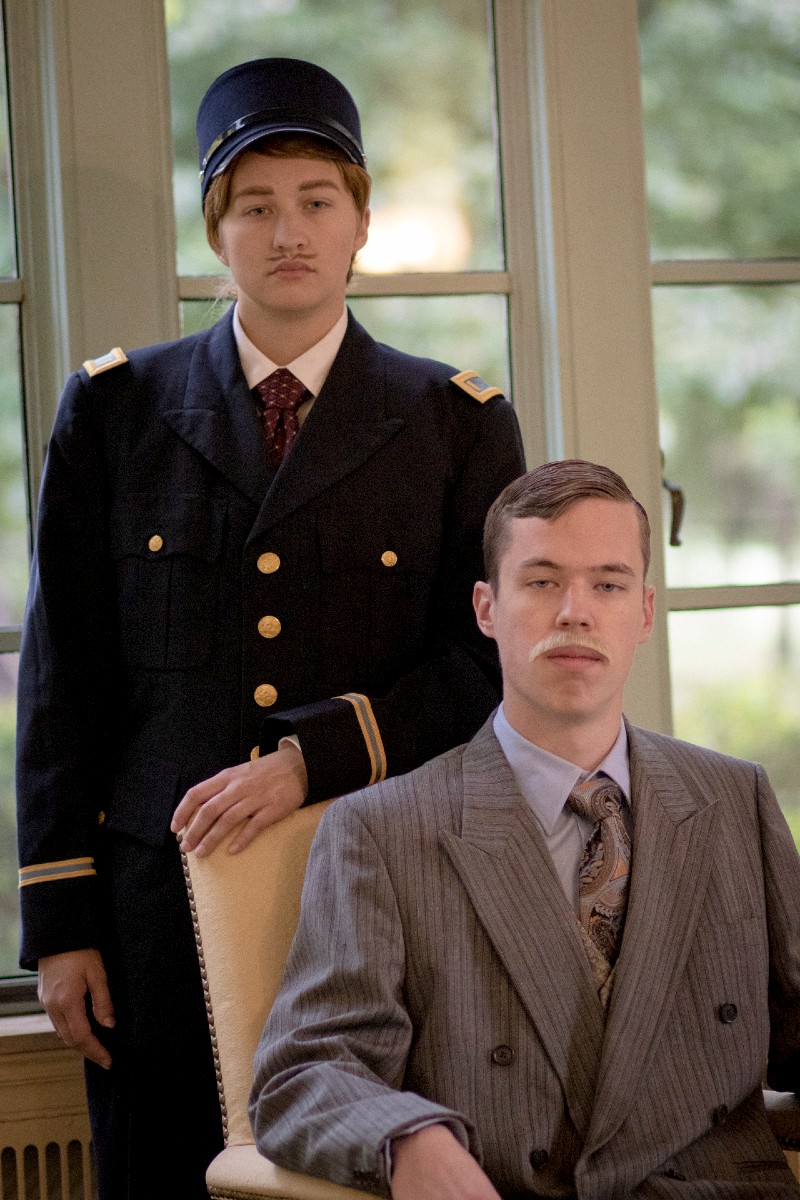 On October 10, the intimate Black Box Theatre at Concordia University was a warehouse full of pianos for a used piano sale. By the end of the month, the 200-seat theater will transport an audience across a winter landscape from Istanbul to central Europe on the legendary Orient Express.

And murder is afoot.

Concordia’s theater department is presenting Ken Ludwig’s stage version of Agatha Christie’s ever-popular Murder on the Orient Express, October 27-30. Hercule Poirot, the eccentric Belgian private detective, will twirl his extravagant mustache and use his gray matter to solve a complex case of murder as the Orient Express makes its way west before being trapped in a blizzard.

It’s a challenging case for Poirot with so many suspects and it’s a challenge for Concordia with the play's unusual setting, numerous European accents, and a large cast of potential murderers.

But Concordia’s theater director Amanda Williams is happy to accept the challenge of presenting a famous mystery and giving a tip of the hat to the woman who transformed the mystery genre, Agatha Christie.

“When I first started looking for a show this year, I really wanted to do something that was written by a woman,” Williams said. “I felt that was something real important to do.”

She was also intrigued about doing a mystery.

“We haven’t done a murder mystery in a real long time here,” she said. “Our [fall] productions usually wind up around Halloween time, so it’s a good time for a mystery.”

For the director, the first mystery to solve was how to present a play set on a train on a small intimate stage and how to navigate a large cast in a small space. Williams and scenic designer Norma Polk were up to the task.

“There are moments where there are flashbacks,” Williams said. “The initial murder we filmed in our campus manor [the Earhart mansion built in 1936], which was a lot of fun. The study there is perfect, they’ve got wood walls and a library, so it was perfect for the period. We’re going to be projecting that.”

“For our train, we actually have turntables, so we see the dining car in one scene and in another scene we see the bedroom or the compartment,” Williams said.

Polk has been working with construction workers on making the mechanics move smoothly by showtime.

“They’re turning three different turntables, so they turn while we do the production,” Williams said. “We put that all together this week. We’re excited, we’ve never done anything like that here, We’re trying to amplify all of our technical areas.” 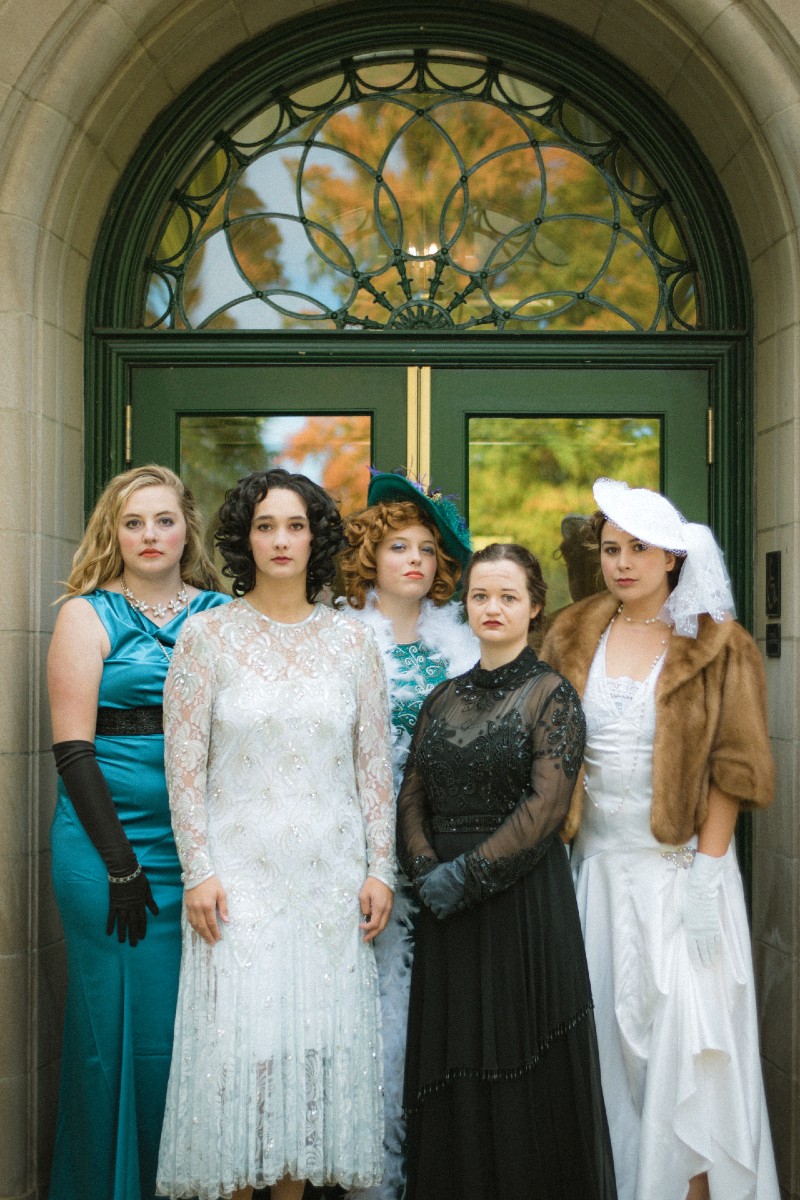 Students from Concordia University make up the cast of Murder on the Orient Express. Photo courtesy of Concordia Theatre.

About 20 students are involved as cast and crew. Concordia offers a minor in theater but most of the students involved in production are not theater students and all are majoring in something other than theater. Some have experience in previous productions, or in high school and summer theater. Some are experiencing the rush of performing on stage for the first time.

The play is set in the 1930s, which means finding clothes to fit the period. The performers are younger than the characters they play, so makeup is another challenge. The director also has to carefully lay out the clues so the audience is trying to solve the mystery before Poirot does.

Navigating a tight stage is the biggest challenge for the director and the cast.

“Parking them all on a train compartment is difficult,” Williams said. “There’s a lot of ‘oh, you’re falling out of the train’ and we have to move people so they fit in that tight space. But, I think it adds to the story, too, that they are cramped in this tiny little compartment in the middle of nowhere when there’s a blizzard.”

For the actors, the biggest hurdle is the accents.

“We have everything,” Williams said. “Hungarian to Swedish to Welsh to Belgian. It’s all over the place. It’s even more challenging when there are so many accents happening at once to keep it straight in your brain.”

Chole Haynes, a senior from Bay City, plays Michele, the conductor, a male role. But that’s not the challenge, the challenge is that tricky French accent.

“I have not done a French accent before in a production,” she said. “I’ve done British accents and Southern accents, but it’s not the same at all. The placement of the tongue and where you’re speaking from, it’s been a steep learning curve. The very first scene where Princess Dragomiroff comes on and is speaking in a Russian accent, and I want to step into that and I don’t know why the Russian seems easier than the French.”

Haynes said Williams has been working with her to master the accent.

“I think a month and a half ago if you asked me to do a French accent, I couldn’t, I would have butchered it,” she said. “It’s coming along nicely.”

Samuel Botzum, a junior from Indianapolis, plays Monsieur Bouc, an executive for the railroad who enlists Poirot’s help in solving the murders.

He has also been working on his French accent but is enjoying his role.

“What I enjoy most about him is that I love his outgoing kind of character and how he takes pride in the Orient Express and also that he wants to see justice done,” he said.

The production provides numerous opportunities for students to participate. Isabelle Arnold, a sophomore from Monroe, is the assistant director.

“It’s my first time doing this on a collegiate level,” she said. “I’ve done it with 5- to 12-year-olds, but this is the first time I’ve done it in the big leagues, I guess. I prefer performing, but this is a time when I step back and work with the crew and watch them. It’s more of a fun thing in a leadership role.”

Each year Concordia presents a non-musical play in the fall and a musical in the spring, which will be Bye, Bye Birdie. It is set in the 1950s to balance the mystery set in the 1930s. In addition, the school is doing a children’s show for second to fifth graders featuring one-act plays.

“We try to provide opportunities to students who are interested in leadership, from playwriting to directing,” Williams said. “Next year we’ll be doing a cabaret that will be student-led. A lot of students have been interested in those kinds of opportunities.”

Chloe Haynes has written one of the one-acts for the children’s show.

“I hadn’t really done that before Amanda asked us in the spring if any of us wanted to,” Haynes said. “And I thought, yeah that would be fun. It’s a fun thing, a good creative outlet. We just did a read-through today and it was funny and I have to cater to a grade-schooler, which I’ve never done before.”

Fun is also the major intent of the Murder on the Orient Express.

“I hope that first and foremost, that the audience is entertained and our performers are authentic,” Williams said.

Botzum said he read the book and watched a movie and found out how involving a mystery could be.

“If we can contain that vision as well, that’s what I want the audience to see, that this is an actual story not just some people on stage reading lines, there is a full history here,” he said.

Haynes wants the audience on the edge of their seats.

Arnold wants to surprise the audience.

“I hope people are surprised by how good a show we put on and recognize all the hard work that the cast and crew have done because they’ve put in countless hours memorizing lines and perfecting accents and the crew building sets,” she said.

The Concordia University Theater department will present Agatha Christie’s “Murder on the Orient Express” at 7 pm on Oct. 27-29 and at 2 pm on Oct. 30 at The Black Box Theatre in the Kref Center for the Arts on the campus on Geddes Road. For tickets, visit cuaa.edu/krefarts-events or call 734-995-7537.