Everybody's Kranky: In a recorded talk, Bruce Adams discussed his recent book on the rise of Chicago's thriving 1990s independent music scene and the influential record label he cofounded 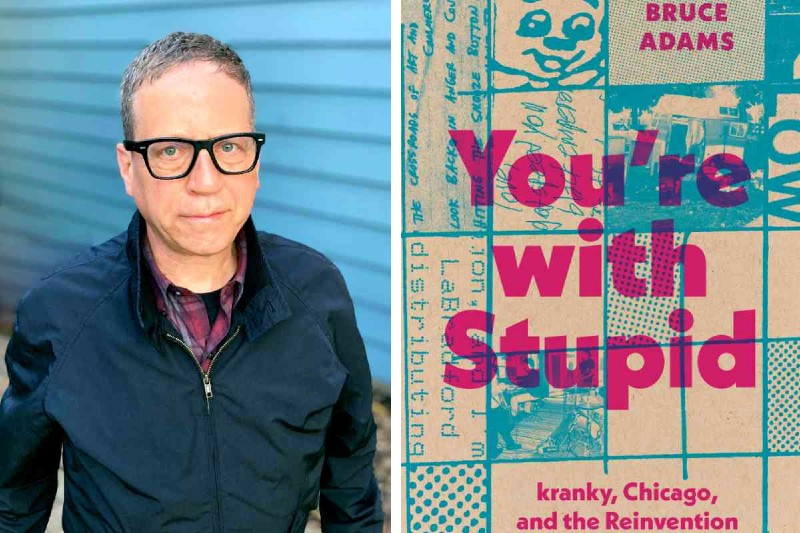 For a guy who cofounded a record label named kranky—small k, thanks—that used marketing slogans such as "Honk if you hate people, too," Bruce Adams is one of the nicest people in the music industry.

Adams' new book, You're With Stupid: kranky, Chicago, and the Reinvention of Indie Music, recalls not only the rise of his experimental label but also the inventive, genre-hopping sounds that were coming out of the city in the 1990s. It was also a time when major labels swooped into town to sign the likes of The Smashing Pumpkins, Urge Overkill, and Liz Phair after Nirvana showed corporations that the independent music scene could sometimes provide commercial hits.

A former Ann Arbor resident, Schoolkids Records employee, and WCBN-FM DJ, Adams moved to Chicago in 1987 to work for various music-distribution companies. He also worked at the influential Touch & Go Records as a publicist, handling bands such as Ann Arbor's Laughing Hyenas as well as Slint, Die Kreuzen, The Jesus Lizard, and many other bands that took the energy of punk rock and twisted it into new forms of dynamic and frequently very heavy music.

But in 1993, Adams and his colleague Joel Leoschke looked at the stacks of indie-rock CDs and 7-inches flooding into the Cargo Distribution warehouse where they worked and decided they wanted to do something completely different with their record label. The duo took their inspiration from 1970s progressive-music labels such as Editions EG, which counted Brian Eno's transformational ambient albums in its catalog, and ECM Records, which focused on jazz (and classical) that came from a more European approach to improvisation; more open to exploring space and unique timbres rather than blues-informed swing. They also looked toward German kosmische musik of 1970s groups such as Neu! and Cluster as well as then-contemporary psychedelic bands such as Spacemen 3, which played drone-based rock 'n' roll.

Adams and Leoschke wanted kranky to represent music that was artful, hazy, and deep—and they found the perfect first band for their new label: Labradford.

Prazision was the debut album by the Richmond-based duo (later trio) Labradford, which used guitars drenched in reverb, 1970s analog keyboards that weren't popular then, and sung-spoken vocals that blended into the vast smudge of ambient sounds.

The label went on to release albums by godspeed you! black emperor, Stars of the Lid, and kranky's most popular act, Low, the slowcore band fronted by the husband and wife duo of Alan Sparhawk and the recently deceased Mimi Parker. The label still continues to this day, releasing forward-looking music by Grouper and Jessica Bailiff as well as albums by Dearborn's Windy & Carl and Ann Arbor's Justin Walter.

Adams and Leoschke used what they learned from working for indie labels and distribution centers in order to not make the same mistakes they saw happening over and over: treat the bands with respect, pay them, and only release music you love. In the words of American poet Joe Perry, kranky "let the music do the talking."

A lot of music memoirs are filled with gossipy details, but since Adams really and truly is a nice guy, You're With Stupid avoids any deep, dark revelations or pointed barbs. It's more a survey of the vast amount of creative musical endeavors that defined Chicago in the 1990s rather than salacious tales of excess.

Adams discussed You're With Stupid at the Ann Arbor District Library's Downtown branch at 6:30 pm on Thursday, November 17. I was the guy interviewing him, and we talked about the kranky's groundbreaking music and the 1990s Chicago independent music scene.

A video of our chat is below, and for those unfamiliar with the label, Adams picked five tracks and added commentary to introduce new listeners to the kranky sound:

Labradford “Up to Pizmo” from Fixed::Context
I always referred to Labradford as “The Flagship of the Fleet” when I worked at kranky. Mark Nelson and Carter Brown were the first band we signed at the label. They were joined after their debut album Prazision by Bobby Donne. Each record built on and advanced the sound of the group, yet remained distinctly Labradford. This is a track from their final album, recorded with Steve Albini in Chicago.

Low “In Metal” from Things We Lost in the Fire
I have a heavy heart and few words after the loss of Mimi Parker to ovarian cancer on November 5. She wrote and sang “In Metal” about her then-young daughter Hollis. When Mimi, Alan Sparhawk, and Zak Sally joined kranky it immediately raised the label’s profile. I remain grateful for their trust and companionship.

Stars of the Lid “The Lonely People (Are Getting Lonelier)” from The Tired Sounds of Stars of the Lid
If you have heard kranky described as an “ambient” label, it’s probably because of Stars of the Lid and this album in particular. I prefer “widescreen” as Brian McBride and Adam Wiltzie combined their cinematic interests and experimental bent to make music for the big screen in your mind.

Bowery Electric “Long Way Down” from Bowery Electric
Catalog number 007 from 1995. Bowery Electric is the band I point to when people describe kranky as an “ambient” label. They were tuned in to a combination of guitar haze and rhythmic pummel that garnered attention across the pond.

godspeed you! black emperor “The Dead Flag Blues” from F# A# ∞
This is the opening track to the album that most people know kranky from. It certainly secured kranky as a self-supporting record label, and the band’s constant touring and amazing audio-visual presentation garnered a big audience. The moral for record labels? Listen to everything that comes into your mailbox.

Bruce Adams will discuss You're With Stupid: kranky, Chicago, and the Reinvention of Indie Music at the Ann Arbor District Library, 343 South Fifth Avenue, on Thursday, November 17, 6:30 pm-7:30 pm. This event is in partnership with Literati Bookstore and includes a signing with books for sale.