Encore Theatre's “A Christmas Story: The Musical" sings the praises of the classic film 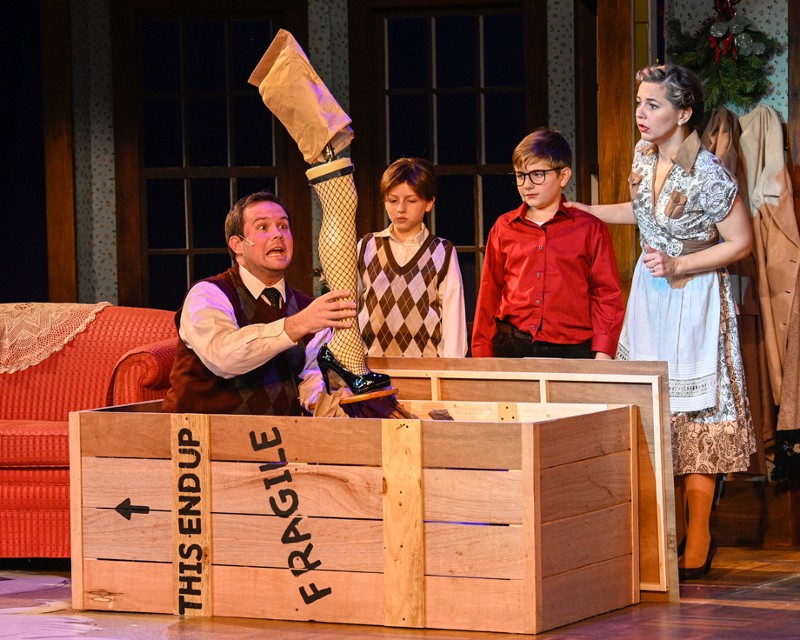 The musical version of A Christmas Story has a dogged loyalty to the 1983 movie’s script—but with good reason since it's a charming and funny childhood tale. Photo courtesy of Encore Theatre.

A stage musical based on a beloved film classic—like, say, A Christmas Story: The Musical, now being staged at Dexter’s Encore Theatre—can be a double-edged sword.

Yes, it’s a known commodity, so people will often line up to see it without too much coaxing, but the show’s creators must delicately thread the needle of staying true enough to the original material to satisfy fans, while also providing enough surprises and new elements to remake the story in a new medium.

If anything, the musical adaptation of A Christmas Story—with a book by Joseph Robinette, and music and lyrics by University of Michigan alums Benj Pasek and Justin Paul (before they won Tonys for Dear Evan Hansen)—errs slightly on the side of dogged loyalty to the 1983 movie’s script, straining to check every classic-moment box.

Yet the reason Story has so many such boxes is because it is a funny, charmingly rendered, nostalgic slice of American childhood, set in a small Indiana town in 1940.

Drawn from radio stories told by humorist Jean Shepherd in the 1950s, Story focuses on the pre-Christmas trials and tribulations of 9-year-old Ralphie Parker (Gavin Cooney), who desperately wants a Red Ryder BB gun. The problem is, he can’t convince his parents (David Moan and Jessica Grové), his teacher (Alley Ellis), or even a department store Santa (Mitchell Hardy) that if he gets one, he won’t “shoot his eye out.”

But Ralphie keeps scheming while also dealing with bullies, theme papers, and a gruff father who’s chasing his own form of validation.

First, let’s address the baby elephant in the room:

I know it’s just a BB gun. I rationally understand that it’s essentially a toy. But I’ll confess to feeling uneasy nonetheless—on the heels of the Oxford school shooting among others—while watching Ralphie fantasize, yearn for, and lovingly carry around the coveted Red Ryder. That’s not a critique of the show itself, but rather a (literal) trigger warning. Though the show is unabashedly lighthearted and sweet in tone—and Encore executes it really, really well—it may also occasionally drudge up some feelings about the troubling link between guns and masculinity in the American psyche.

Having said that, though, there’s an awful lot to love about Encore’s Story. 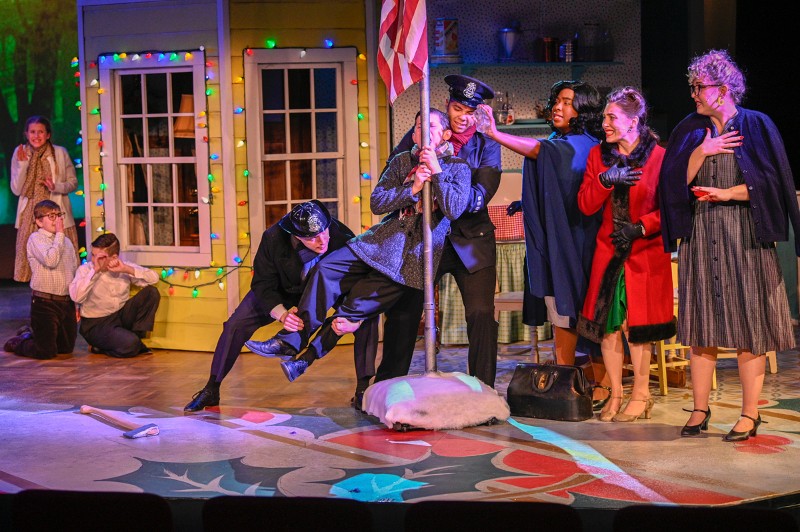 The stage edition of A Christmas Story walks the line between honoring the source film while also adding new surprises—and music! Photo courtesy of Encore Theatre.

Though I don’t see as much local theater as I once did, I’d bet really good money that nobody’s having more fun on stage right now than Moan does while hammily, delightfully crowing his way through “A Major Award”—a number about “The Old Man” winning a salacious, fishnet leg lamp by way of a crossword puzzle contest. And Jessica Grové is a subtle marvel as Mother, illustrating the whack-a-mole nature of domestic life via “What a Mother Does,” and recalibrating Ralphie’s catastrophizing with the gentle, moving number, “Just Like That.”

Admittedly, Grové is a natural to play Gavin Cooney’s mom, since she is his mom, and husband/dad Dan Cooney, Encore’s co-founder, is Story’s director. (Both Grové and Cooney are Broadway vets who’ve moved their family to Michigan.) But it’s Gavin Cooney who must carry the show, ultimately, and he more than holds his own on stage, as does Cora Steiger as Ralphie’s squawky little brother Randy. Add in a solid youth and adult ensemble; a terrific narrator (Brian Cowan); and an over-the-top, joyful number spotlighting Ralphie’s teacher, Miss Shields (the fabulous Alley Ellis), warning him, “You’ll Shoot Your Eye Out,” and you’ve got a pretty satisfying holiday show.

Dan Cooney skillfully fits this big, splashy show in the Encore’s (relatively) new space, despite the rare moment—like the “Ralphie to the Rescue” number, which brings Ralphie’s fantasies to life and thus has a ton of moving parts—when a hint of strain becomes briefly visible. No matter. As Grové sings “Just Like That,” the moment’s gone, and you’ve fully engaged again in Cooney’s warm, open-armed hug of a production.

On the technical side, Shane Cinal designed the versatile, effective set, with the Parkers’ two-level home flanking a blank space that becomes a school, a playground, and a department store. Costume designers Marilee Dechart and Sandee Koski do outstanding work, outfitting a large cast in era- and season-appropriate clothing.

One reason the film A Christmas Story became such a classic is that it doesn’t just slap a sunny face on childhood. It reminds us, quite palpably, of the frustration, powerlessness, and indignities (looking at you, pink bunny costume) of being a kid. Yet it also, at the same time, renders visible the deep parental love that we often couldn’t, in our youthful self-absorption, see. And that, like Encore’s production of A Christmas Story, is truly a gift.