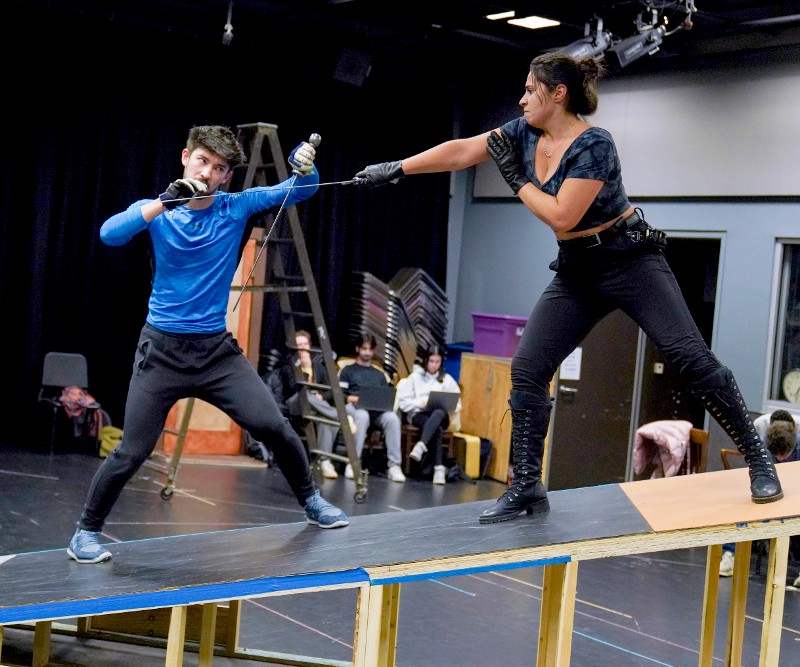 “From what I know of Robin Hood, it’s the story of morality, stealing from the rich, giving to the poor. There’s a lot of swashbuckling and fights in the forest and has largely centered on Robin and the Merry Men as being sort of virtuous and inherently good,” Packard said. “I think David Farr’s version in this play asks the question, 'How did this version come to be and centers Marion’s character as being more of the engine for goodness and humanity than Robin’s character?'”

Of course, this version of Robin Hood still has a lot of swashbuckling, energetic fight scenes, and derring-do. It’s a spectacle that is meant to fill the large Power Center stage and to take advantage of what Packard calls “a pretty robust training program in staging combat.”

Packard said he took the play to the season’s selection committee on the advice of his twin brother, who had performed in a production of The Heart of Robin Hood at the American Repertory Theatre (ART). It had those energetic fight scenes, a strong female lead, and music.

“We were looking for something with music, with the potential for a musical moment. The version he did at ART has all of that, so I brought that to the selection committee and thought it would be a great fit,” he said. “It’s a massive show and so a little scary for me as a director. But last year we had a great experience working on [the play] Junk at the Power Center.”

Stefania Gonzalez plays the pivotal character of Marion, Robin’s great love, his conscience, and sometimes his fierce adversary. Gonzalez is a senior with a major in acting.

“I think what attracted me most about playing Marion over anyone else in the cast was that she seems to embody a lot of what I feel women are portrayed as in theater while also challenging that notion,” she said. “There can be on the surface a lot of damsel in distress, a lot of ‘Oh, I’m in a bad situation, I need help!’ At the same time, Marion helps herself, she does a lot for herself to change her situation while also allowing for real-life feelings, real-life relationships with other people to impact what she values. I also think she has sort of a privileged upper-class view of the world that’s a little romantic; she wants to play savior to everybody, but going out and actually being a savior and helping people, what does that look like.”

Gonzalez had to master the fight scenes and prove herself to Robin and the Merry Men and to fight off the forces of the evil Guy of Gisborne and Prince John.

“I think the biggest thing with the fight sequences is having a fantastic fight director. Christina Treaster is there and enables us actors to tell the story, most importantly, as the action is secondary to telling the story. Whatever plot points we’re trying to hit with this action sequence, what are we trying to accomplish in having physical fighting, and what fighting will support that,” Gonzalez said. “We’re lucky enough that a lot of us have a lot of training in stage combat so Christina is really great in having us think things through our character’s lens and create our own choreography.”

Asked who was the better fighter, Robin or Marion, Gonzalez says they each have a different style.

“I would say there is an equality to the two of them in every aspect of the word,” he said. “I would say we are really trying to explore, like in those love stories when you find your equal. It’s scary and needful and that is what draws these two characters together. They are drawn to each other by their equality and skill.”

Farr’s play calls for folk-type songs in a couple of spots. Packard wanted to expand on that idea for the U-M production. He said he wanted the music to emphasize the forest setting and create “a harmonious bluegrass setting.”

“I was interested in listening to the bluegrass band the Wailing Jennys, which is three women bluegrass musicians who sing in tight harmonies,” he said. “We hired a bluegrass band from Ann Arbor called the Westbound Situation and they’ll actually be on stage making a live sound.”

Packard said the set designed by Kevin Judge uses the forest and nature as inspiration for the set. He said the emphasis is on a sparse staging defined more by forest than castle.

“We have a gigantic ramp that cuts through the stage where you can have fantastic fight scenes,” he said. “We wanted it to be a set that might be imagined by a small child as they read the story of Robin Hood. So it’s not hyperrealism; it’s more magical and gestural in that way, but I find it to be really beautiful and thrilling.”

The student assistant director is Natalie Tell, a sophomore. She said she has a variety of different roles in helping to bring the production along. She gives director Packard the audience’s perspective.

“There needs to be a second person who allows him to view it [the production] through another eye. I feel like my role is to allow Geoff to shift and grow,” she said. “Another role is keeping the room connected to each other, allowing a safe space not only for the director but also for those at the table and on the other side of the table.”

She said this is a complex play with a lot going on at the same time.

“It can be overwhelming and I thought at different times I ease people’s minds to figure things out one thing at a time. I’m also open for character questions when they need it,” she said.

Gonzalez and Tell agreed that the play challenges the old idea of fairy tales.

“Things do end happily ever after in this production but the journey to get there is not boy meets girl, they fall in love, and everything is fine,” Gonzalez said. “It’s more grounded in real-life problems, real-life politics, real-life issues that we deal with on a daily basis.”

But, Packard notes, the play is also a swashbuckling adventure.

“I do want the audience to have a good time,” he said. “I want them to be dazzled by the spectacle of it all, and yet we spent a lot of time—as I wrote in my director’s note—[wiping] a little of the polish off a tightly polished story, to get more to the humanity of it all.”