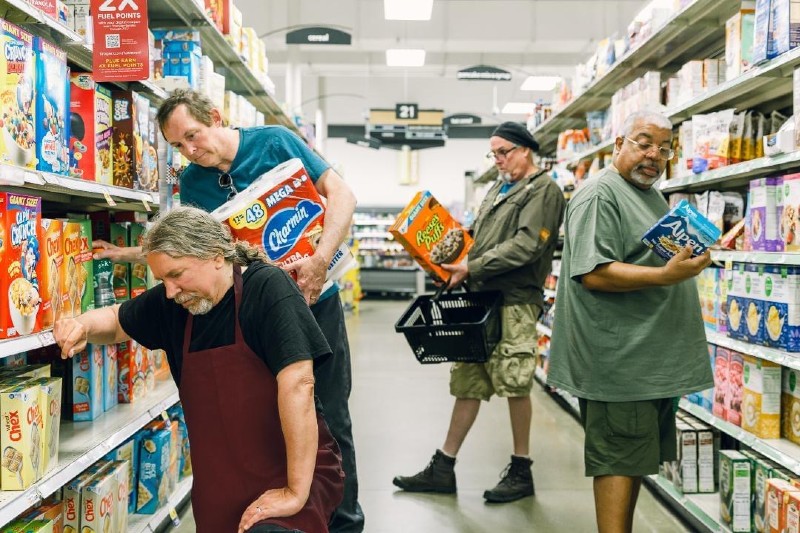 Delaney and Gentry opted for a rock-opera concept record and constructed a storyline based on a fictional character named Joey Wendt.

“We didn’t want to make it a political rant or a ‘them or us.’ We wanted it to be an emphasis on the character and how this character makes the journey based on the information that he has at that time,” Delaney said.

“That’s a lot of what the pandemic was about … this idea of ‘How are you going to react to the information you have at this time to make the best decision to move forward for you and your family?’”

Along with Tim Delaney (bass, vocals) and Tony Mitchell (drums), Delaney and Gentry formed Chickenwire Canöe and started formulating tracks for Joey Wendt with engineer David Roof at Rooftop Recording. (Brian Delaney and Tim Delaney are brothers, but Brian is the Delaney quoted in this article.)

Joey Wendt features 15 tracks spread over two acts. Inside that world, Joey lives moment-to-moment and works part-time at a local grocery store stocking shelves at night. He despises the weekday grind and relishes fronting a rock band (also called Chickenwire Canöe) with his friends on the weekends.

As the pandemic hits, Joey works overtime at the grocery store, forgoes band rehearsals, and becomes seduced by conspiracy theorists and charlatans. He later finds himself in Washington, D.C. on January 6, 2021 at the Capitol riot.

“Joey’s the everyman, and he’s the guy who’s unseen. He never really thinks about his own plight or world. He just shows up, does what he does, and then disappears to do his own weekend warrior thing,” said Delaney, whose guitar playing is inspired by Brian May and Eddie Van Halen.

“He repeats it over and over again until the pandemic kicks in. Once we had the premise, then that’s when things accelerated, and we could actually start to think inside the mind of Joey.”

The exploration of Joey’s mind starts with the energetic opener, “Are You Having a Good Time?,” which was recorded live at The Ark during a July performance of Joey Wendt.

Boisterous electric guitar, bass, and drums echo Joey Wendt’s pandemic denial as Gentry sings, “You heard it before, and you’ll hear it again / It’s not a matter of where, it’s just a matter of when / There’s someone shouting the world’s gonna end / But it’s not ending right now, and I say yeah!”

“What we wanted was Joey pre-pandemic doing his thing like he does every weekend at a gig, so it should have that live feel. We thought, ‘Why don’t we just take the live recording that we just did and use it for ‘Are You Having a Good Time?’ because it’s got the crowd noise and the rawness,’” Delaney said.

“If you read the libretto, you understand there’s also a point in which lockdown hits, and Joey is pining for the old days. In his imagination, he conjures up this ultra Chickenwire Canöe band, and he’s ripping through this tune and slaying it while he’s fronting the band.”

As the pandemic hits the nation, everyday normalcy stops for Joey, and he enters a holding pattern. This prolonged period of “Now We Wait” weighs on Joey as melancholic acoustic guitar and electric guitar reflect his growing despondency.

Gentry sings, “It’s all been said and done tonight / Except to rage against the dying of the light / It’s all been read in black and white / When wild we sang and caught the sun in flight.”

“At one point Mike [Gentry] came over, and I have a whiteboard in my music studio. I stood there, and he had written one tune already just as a reaction to the pandemic, which was called ‘Now We Wait.’

“He had it in the can, and he had given it to me as a demo with just an acoustic guitar and voice. I had done some overdubs on it, so we knew we could work together in that kind of format.”

He sings, “Start washing your hands and making zero plans / You thought N95 was a highway / And now you’ll be saying on the road ahead / Nothing will be going my way!”

“All of Joey’s usual haunts and behaviors are taken away from him, and he goes down this rabbit hole,” Delaney said. “The minute everything becomes really clear for him … he’s outta luck.”

Joey presses his luck while surfing the internet and becoming enamored with conspiracy theories. His online perusing quickly escalates into joining like-minded protestors for a January 6 march in the nation’s capital.

“It had to show action of somebody climbing aboard a bus and sitting there wondering, ‘What am I doing? Have I completely made a mistake?’” Delaney said.

After arriving in Washington, D.C., Joey participates in a rally and joins the throngs of people headed to the Capitol. He becomes terrified as a riot erupts and flees the scene.

With Joey back home, Chickenwire Canöe closes the album with the title character stacking cereal boxes at work and looking over his shoulder. He regrets his actions and anxiously wonders if the FBI will arrive and arrest him.

“Part of the arc of Joey Wendt is that we left Joey where we left him at the end of that story because we didn’t want an end to it in the sense of ‘Well, they lock him up,’ or that it all works out,” Delaney said.

“There has to be room in the lives of citizenry to realize that maybe you made a mistake and can recalibrate, gather your forces, and move forward and learn from your mistakes. If we can’t do that as a society, then we’re utterly lost.”

While Joey’s fate is still pending, Chickenwire Canöe’s is not. The band has started writing material for a new album, but it won’t be another concept record.

“Mike [Gentry’s] already writing songs for that, and he’ll give me a handful of things to listen to. I’ll take my red pencil and give him my input, and those will evolve into basic demos,” Delaney said.

“Then, Tim [Delaney] and Tony [Mitchell] will end up with them … and probably over the winter, we’ll hammer through some stuff. We want to write a record that we each will be proud of that’s traditional rock ‘n’ roll.”