Out of the Cave: Rapper Killa Kam stepped into the spotlight in 2022 with an outstanding debut album 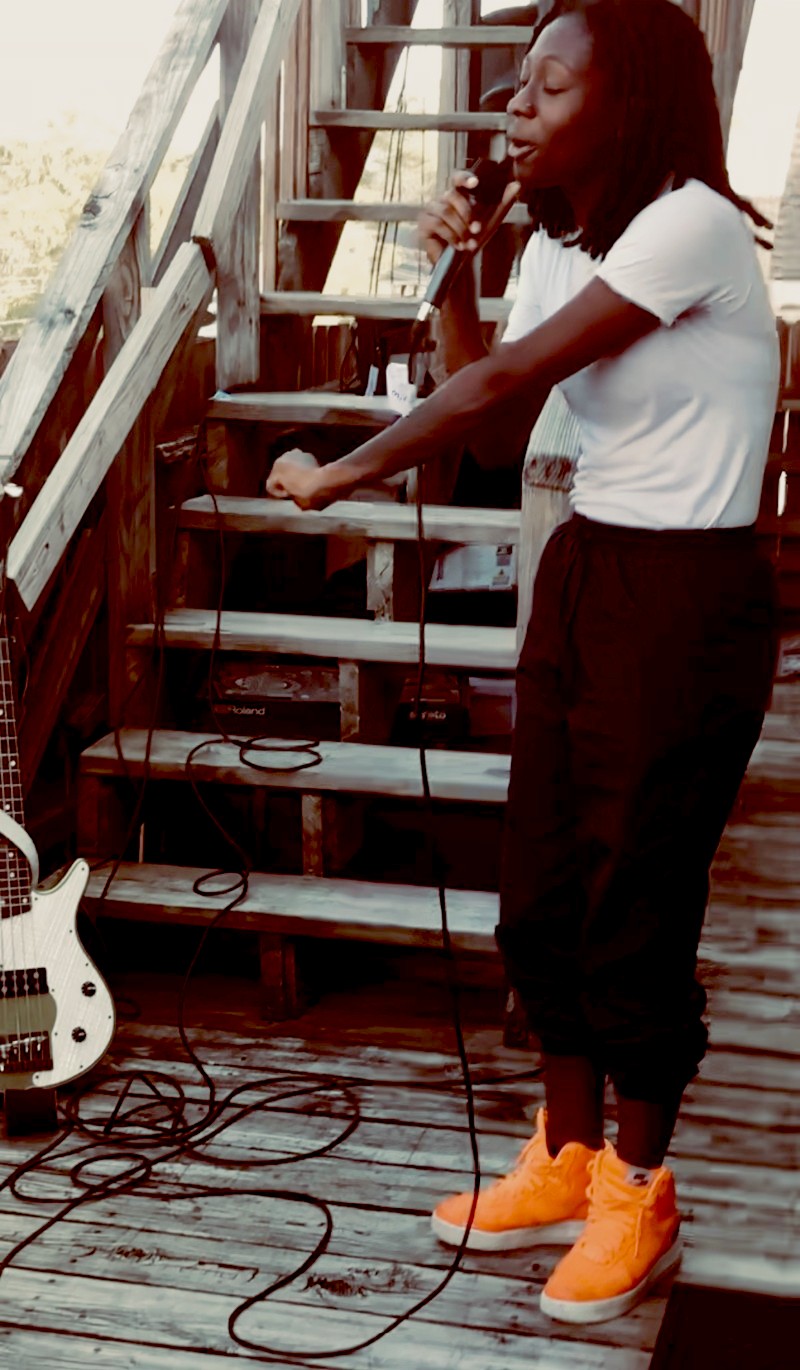 Rapper Killa Kam performs on the porch of Super Dope and Chill Studios in Ann Arbor on October 15, 2022. Photo courtesy of Kamryn Thomas.

Killa Kam has the kind of speedy and confident flow that pairs well with an atypical hip-hop producer like Scary Steve Klingbiel, who mixes in off-kilter sounds with his beats that might trip up a less talented rapper.

Together, the duo produced the excellent Cave That I Left album, which showcases a dynamic new voice on the Washtenaw County music scene.

As the Canton, Michigan native Kamryn Thomas, Killa Kam studied music technology at the University of Michigan School of Music, Theatre & Dance before taking a break because of the pandemic. Kam and Klingbiel met at U-M and soon began collaborating on music. The duo debuted with the single and video "They Take IV," when Kam was going by the stage name A.N.G.E.L.I. They followed that up with the full-length Cave That I Left, which came out in April and showcases Kam's personal and creative lyrics.

Pulp spoke to Kam about her album, big dreams, and the Ann Arbor music scene.

Q: What was your motivation for creating the project?
A: Cave That I Left is a concept album that developed over time as I sent demos back and forth with Steve. He and I went to college together and were lucky enough to collaborate on a couple of projects prior to this release. Each song unveiled some aspect of what it was like for me growing up. I get into everything between religious parents, mental health, queer young love, and identity/purpose. Even though writing the lyrics for this album was emotional for me, it was such a safe space.

After a couple years of exchanging music with each other, we could see the coming-of-age story forming. The motivation really was to make something cohesive out of all these scattered songs. As time went on, we could think more about song order and transitions for sure, but I think ultimately, we both wanted to make something that was a unique and honest snapshot of time.

Q: What is your favorite song on the album?
A: My favorite song from Cave That I Left is, for sure, “Big Dog.” That’s the first song I wrote after leaving my childhood home. I needed some type of confidence boost, something to make me feel tough and everything. I love the energy of that song! It was such a style switch for me; I never used to talk as much shit in my music. “Big Dog” was the first song where I really had fun writing the lyrics, instead of toiling trying to find the exact right words. The entire sentiment of that song is truly how I feel, though. I’ve been a short, li'l string bean my whole life, LOL, but inside I feel tall and buff, and that’s how to act a lot of the time.

Q: What track do you find most resonates with your fans and audience?
A: As far as I know, “Comfort Zones” is the most listened-to track so far. That song is about my beef with the government and capitalism and how comfortable our society is leading this lifestyle.

In 2020, I had a major existential crisis, and I was super discouraged looking at the economy and social systems at play. I use music to escape that monotony daily, but I also see it as a literal potential escape plan from the rat race, like most aspiring musicians. Halfway through [the song] the beat switches, and then we get more personal about internal comfort zones. I pretty much just vent about having trust issues, being introverted, wanting to push myself more, etc.

The music is so unique, that song wrote itself, for real. I think people like it the most right now because we can all relate to being frustrated with the government and stepping in and out of our comfort zones.

Q: The past few years have been challenging for us all. How is that time reflected in your music?
A: I was writing most of this music during the pandemic. I think being cooped up in a house just brought so much angst and free time to record. Even more candidly, I have bipolar disorder, so I think of this album as a manic interpretation of a depressive episode I had in 2019. This music is pretty much my diary during that time. I sorted through feelings about identity, family, love, religion, questions I still have about the world, and honest takes on how I like to navigate it.

Q: Ann Arbor/Ypsilanti is not a big mover and shaker in the music industry despite its proximity to Detroit and a huge number of talented musicians attending the colleges. How could the scene grow and change?
A: I feel like when you have an environment that believes in academia, tradition, and suburbia, you're less likely to see dreams take off like they do in Detroit, New York City, Los Angeles, etc. People here achieve their dreams by studying for diplomas, working up job ladders, or straight-up just moving away.

There’s also not a lot of talent scouts out here, which is sad because there’s hella talent to scout. The music community that does exist in the A2/Ypsi area is a mostly self-promoted, every man for himself, one-man-band type of place. I think if there were more investors—aka scout people—around instead of just live music fans, we’d have a more competitive and well-known music scene here. 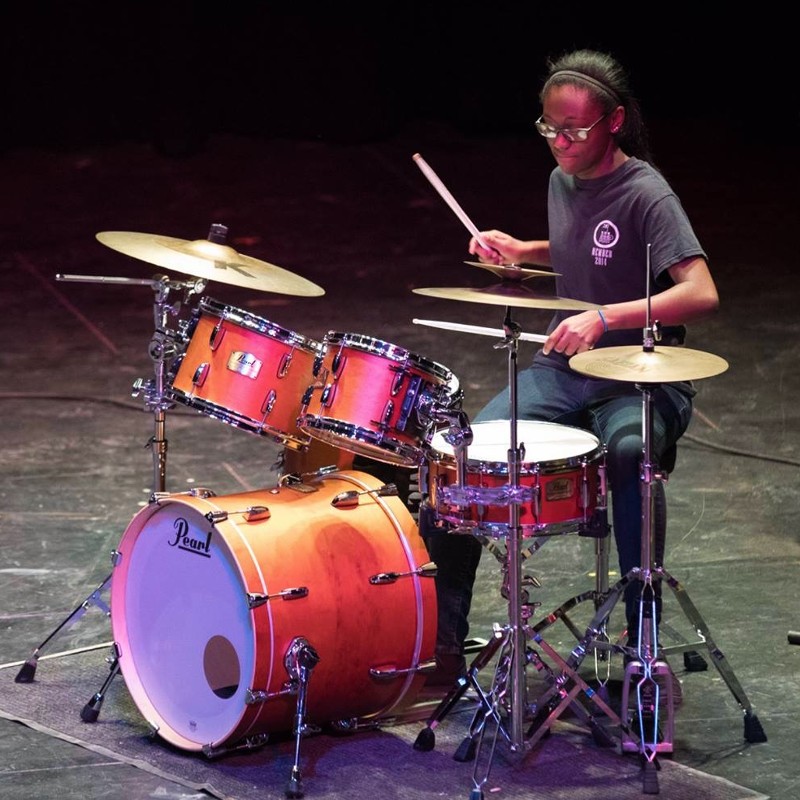 Killa on the Kit: Kam has played drums since age 9. Photo courtesy of Kamryn Thomas.

Q: What do you wish people knew about the Ann Arbor area music scene?
A: I wish people knew more about the hip-hop scene there! I’m saying that because I, for real, didn’t even know it existed. I thought I was the only one until I started getting more booking opportunities and invited to cyphers. But at first glance, Ann Arbor gives jazz and indie [rock] vibes.

Steve and I met Kadence, a legendary rapper from Ann Arbor, and he actually heard the album a year before it was released! He said he would listen while he worked out, and I was like, "Yeah, lets get this out." Both of us look up to him. Kadence is so real and unique; he spits, and it's all about what my generation feels toward the government.

Ann Arbor is crawling with very gifted and aspiring musicians. Though mostly campus kids, there’s no shortage of talent. Those of us who were interested in recording and performing professionally would play at places like The Blind Pig, Live, Cantina, Club Above, and Ziggy’s. I wish people knew the power they have to really elevate our careers out there. People are so supportive of live music and usually are our friends. When it comes to the donations and funding going to the school, I really feel like the city could use more of that to pay and recruit local artists. The Ann Arbor Summer Music Festival is essential for most of us, and I want people to know how much they could change our lives! The support is beautiful and goes a long way.

Q: What's next for you? Are you making more music with Steve?
A: Steve lives in D.C. now; he’s still making music out there, killin' 'em. I plan on flying out there in the spring to record more demos for an EP. I figure it’s a great way to start doing music trips. After my trip in the spring, I’ll start promoting another project, something cute for the summer. We’ve auditioned over 30 tracks at this point, but Steve and I both are perfectionists sometimes, so that’s why I’m saying summer.

Biba Adams is a Detroit-based writer with a passion for people, places, and things. Her work runs the gamut from arts and entertainment to politics—with verve. She has written for Metro Times, theGrio, BET, and many more. Follow her on her social media @BibatheDiva.

Killa Kam has a show planned for February 2023 at Ziggy's in Ypsilanti. Follow Kam on Instagram for details and the exact date, which hasn't been announced yet.