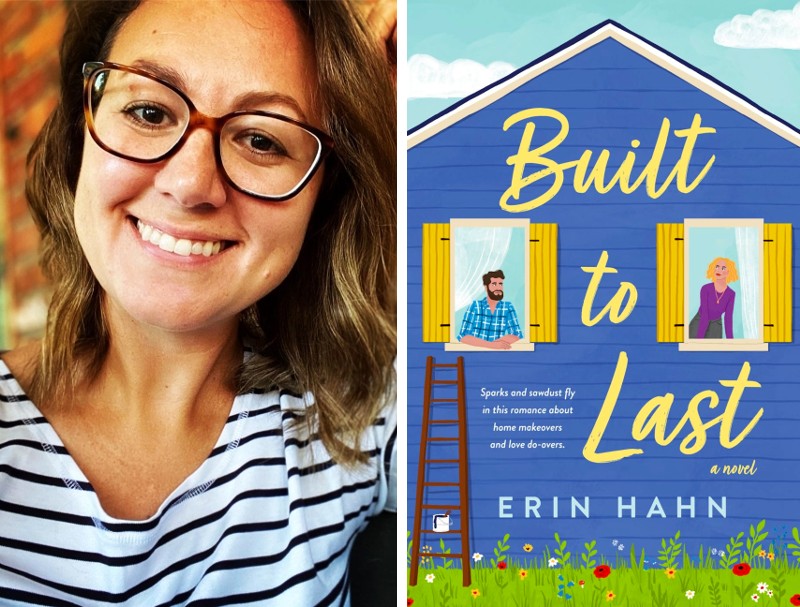 A house is not the only thing being fixed up in Erin Hahn’s new novel, Built to Last.

Two childhood stars, Shelby Springfield and Cameron Riggs, try to rekindle their love when they are brought back together for a home renovation TV program set in Michigan—though things get off to a rocky start, not unlike how things ended. Lyle Jessup, their other costar and the person who caused conflict when Shelby dated him after Cameron, turns out to be the one who brings them together with his TV pilot proposal. While Lyle never left Hollywood and its gossip, Shelby and Cameron have diverged on their paths and must find out if they can work together again—and even have another try at a relationship.

During a visit from Lyle, who becomes the showrunner, the now sober Shelby watches Cameron’s longtime friends, Beth and Kevin, at their bar:

My cheeks hurt from smiling so hard and the fizzy ginger ale does a little swirl in my stomach. These two make it look so simple. You meet, you fall in love, you get married and have babies, and you spend the rest of your life with that one person who likes you best, who you like best.

Both Cameron and Shelby are wildly attracted to each other, but the question becomes whether they can push past the drama of filming and reconnect.

Cameron reflects, “Maybe I wasn’t looking for something to tie me down. Maybe I’ve been looking for someone, an anchor. And not just any someone. Not like the proverbial 'someone,' but her. As in, she is the only one.” He senses how important Shelby is, but their relationship could either be just a pivotal part of growing up or a long-lost—and now found—real deal.

Hahn lives in Ann Arbor with her husband and two kids. Previously, I interviewed her about her last book, 2021's Never Saw You Coming. We connected again to discuss Built to Last, Hahn’s fourth book.

Q: I am happy to be talking with you again! How has your last year in Ann Arbor been since your last book and our last interview came out?
A: It’s been kind of wild! Last spring, my most recent YA novel, Never Saw You Coming, was selected as a Michigan Notable Book, and I spent two months traveling to multiple libraries across the state to speak with readers! In between traveling and the release of Built to Last this fall, I wrote two more novels, my final YA that will be releasing in early 2024 and my second adult romance, a spin-off, that will release next October 2023. So I’ve been very busy in the best kind of way!

Q: What inspired your new novel, Built to Last, which you describe as a romcom?
A: I wrote Built to Last during the height of the pandemic in late 2020 when my family was going through a devastating loss. My YA novels tend to be a little heavier, but all I wanted was to spend some time in whatever joy I could find. I’d never written an adult romance before, but I’ve read approximately a million in my lifetime, so I decided to give it a try. I reached out for every single trope and hobby and setting that gave me comfort and rolled it all up in one romance. Most particularly, the home renovation reality show setting was one I found so soothing. Every doctor’s office across America has HGTV playing in the background for a reason!

I also grew up in the era of Disney child stars turned pop princesses turned scorned young women and had a lot of feelings about that. Without getting too deep down the rabbit hole now, I’ll say I wanted to give my Shelby a happy ending filled with personal growth and a healthy mindset. I wanted to show a couple of former child stars who have made it safely to adulthood and are thriving.

Q: How did you make the switch from young adult fiction to adult fiction? What is different about writing adult novels in contrast to your YA books for you?
A: YA is having a truly spectacular moment right now. Well, really for the last decade! The movement toward, and intention of, making sure all young readers are being represented on the page is so powerful and inspiring. It’s been an honor to be a part of that, and I take the responsibility very seriously. I also see that my voice, as a straight, white, cis-gendered author is maybe better served shouting my support where and when I can and allowing space for other authors to share their stories. At every single book event I’ve done this year, of which there have been over a dozen, I have been asked about book banning. That, to me, is so telling. My books aren’t being challenged so I have the opportunity to advocate and educate about the ones that are.

It doesn’t mean I’m stopping writing YA by any means. But I recognize the gravity of the time we are in and what’s happening all across our country. I want to do whatever I can to support and speak up.

Adult romance is different. It’s vast. No one is pulling adult romances off shelves and challenging them. It allows me to express my joy and spread happily ever afters, which, come on, after the last five years? I think we could all use some gratuitous happiness. I’m so grateful to be a part of it.

Q: Once again, your characters are unique and memorable. Cameron describes Shelby by saying, “She’s got the kind of down-to-earth charm that will make people from all walks of life happily fall in love with her. The girl next door you watched grow up on TV. The one you can never forget.” Tell us how you created Cameron and Shelby.
A: To me, Cameron and Shelby have got gobs of charisma that served them well in their childhood and adolescence and as adults; it’s the same characteristic that attracts viewers to them on their new show. But they have both been out of the game for the better part of a decade and have been living their lives just like the rest of us. They’ve had to cultivate skillsets and friendships and careers outside show business. Take any popular children’s show from 10 years ago and look up the IMDB—or don’t, but know I have!—and you’ll see a third of the actors have gone on to continue acting or singing or producing; they’re still in show business. But the rest have left altogether. They live normal lives in normal towns, raising families and taking their kids to soccer games on the weekends. Those are the people I wanted to explore in Shelby and Cameron. Their history as child stars is what draws viewers. We all want to see that those children we watched grow up are doing okay for themselves, that they’re thriving, even!

Q: You alternate chapters between the first-person perspectives of Shelby and Cameron. Never Saw You Coming has this same pattern. What do you like about this way of telling a story?
A: I’m a sucker for dual POV romances. When I read a love story, I always want to know how both characters are feeling at any given moment, despite what they may be revealing to each other out loud. It feels like sharing a secret with the reader. Like, we know these two dummies love each other, but they don’t and that’s so much fun!

Q: In a chapter from Shelby’s point of view, she says, “The last month has been a blur of hard work and preparations. And flirting. Lots of on camera flirting. So much so that I told Steve I needed to take some time in my shop to work without distraction. … Now I’m hiding from Cameron’s too-capable hands and the way he likes to tuck a pencil behind his ear and then spend the rest of the time looking for where he left it.” For this novel, did you know the outcome of Shelby and Cameron’s reunion from the beginning, or did you take a different approach to the story?
A: Oh no, I knew before page one they were end game. I always know the ending, first. Then I go back to the start and write toward that outcome.

Q: The theme of Built to Last is home renovation and Shelby’s specialty, furniture and wood restoration. Do you have an interest in these professions? How did you learn about woodworking to write the book?
A: I have a very handy spouse and several years of HGTV binge-watching under my belt. I also love watching This Old House on PBS and The Repair Shop on Netflix. I’ve done a tiny bit of restoration on my own, but mostly on the surface-type stuff. So it’s just a lifetime of observing things being made new again.

Q: A favorite question worth repeating again this time: What is on your nightstand to read currently?
A: I just finished Olivia Dade’s latest Ship Wrecked, which was fantastic and so swoony, and a friend recommended my first Lorraine Heath books so I start those next! The Texas Trilogy, I believe it’s called. I’m very excited to dive in!

Q: Built to Last is the start of three adult romances, and you have had a book published each year since 2019. What are you looking forward to next? Is there more for Cameron and Shelby?
A: As I mentioned, I have the follow up to Built to Last releasing next October. It’s a country-music-themed romance featuring Shelby’s best friend—and reader favorite—Lorelai Jones and her return to Nashville. Cameron and Shelby will show up, but mostly just as side characters who are living their best lives! My final for now YA romance, Even If It Breaks Your Heart, releases the following winter, and then my third book in the Built to Last universe, Maren’s story, will be releasing in fall of 2024. So lots more on the horizon!