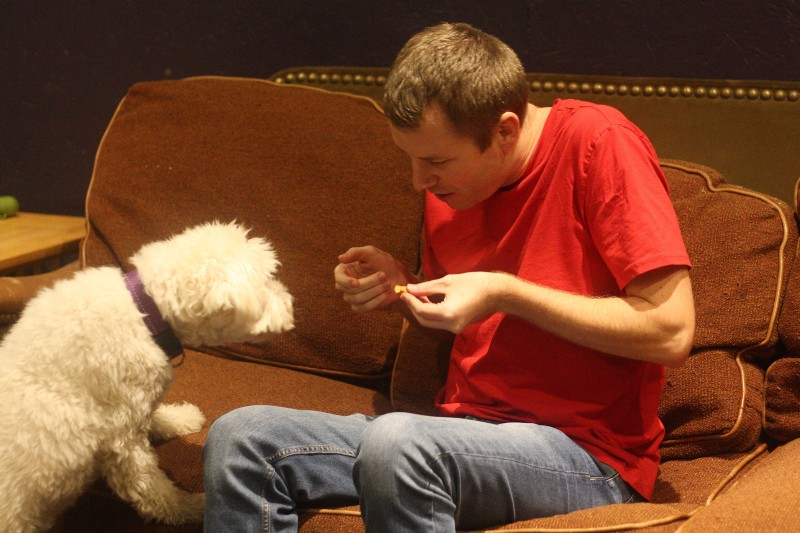 Drew Shaw (along with Rosie the dog) stars as Christopher in the Ann Arbor Civic Theatre's production of The Curious Incident of the Dog in the Night-Time. Photo by Tom Steppe.

Cassie Mann was a fan of Mark Haddon’s best-selling novel The Curious Incident of the Dog in the Night-Time and was excited when Simon Stephens' stage version became a hit in London and New York.

“I went to New York and saw the Broadway version and just loved it,” she said. “It’s got so many elements to it. It’s a family drama, it’s got humor, it’s a mystery, it’s got themes of perseverance and it’s a good character-driven play and yet it’s got a love of fun stuff that goes along with it.”

Mann wanted to direct a production for the Ann Arbor Civic Theatre and was all set to stage it in 2021, when the show was canceled because of the pandemic. This pause gave Mann a chance to delve a little deeper into the play and its unusual perspective.

The Curious Incident of the Dog in the Night-Time begins as a mystery. Fifteen-year-old Christopher Boone discovers the corpse of a neighbor’s dog and sets out to discover who murdered the dog. Though never explicitly remarked on in Haddon’s novel or Stephens’ play, Christopher is on the autistic spectrum. The story of this mystery and what comes after is told from Christopher’s perspective as a sort of therapy suggested by his teacher, Siobhan.

The play is a family drama revolving around Christopher’s troubled relations with his parents. But it’s also a celebration of his determination, his wit, and his mathematical genius.

Mann read some books on autism and one book in particular influenced her approach to the play.

“I read a couple of books, one, Fearlessly Different by Mickey Rowe, who is on the spectrum and was determined to be the first actor to play Christopher in a professional production,” Mann said. “His story about his life and how he actually gets to do it made me think. His big point is that typically people on the spectrum are played by people who aren’t and he said it doesn’t need to be that way. It got into my head that that’s the way to make it feel authentic.”

When she sent out the call for auditions, the part was offered to anyone interested in auditioning.

“But I did invite people on the spectrum to please try out and we also connected with the Autism Alliance of Michigan, who were thrilled we were doing the play and they helped us put out the word to the autism community,” she said. “And, it just so happens that the actor who is playing Christopher worked with the Autism Alliance and is on the spectrum. He’s a really good actor. I’m not going to sacrifice, the character is so important, the person has to be able to pull it off. He’s just a natural, he’s really good. It felt just right.”

Drew Shaw was intrigued by the idea of having the lead role in a play.

“I was in a meeting with the Alliance of Michigan in our branch and one of my co-workers said the Ann Arbor Civic Theatre is seeking out someone with autism to audition for a role in a show, so I took that up,” he said. “It had been a little while but I’d absolutely love to try it and it turned out I wasn’t ready to take on the main character role, but I definitely adapted to it very well.”

“This is a very specific person and it’s not the same as our actor Drew,” she said. “He’s a different person, so he has to figure out how to make this character as written different from him. That’s how we approached it. He’s doing a great job as Christopher.” 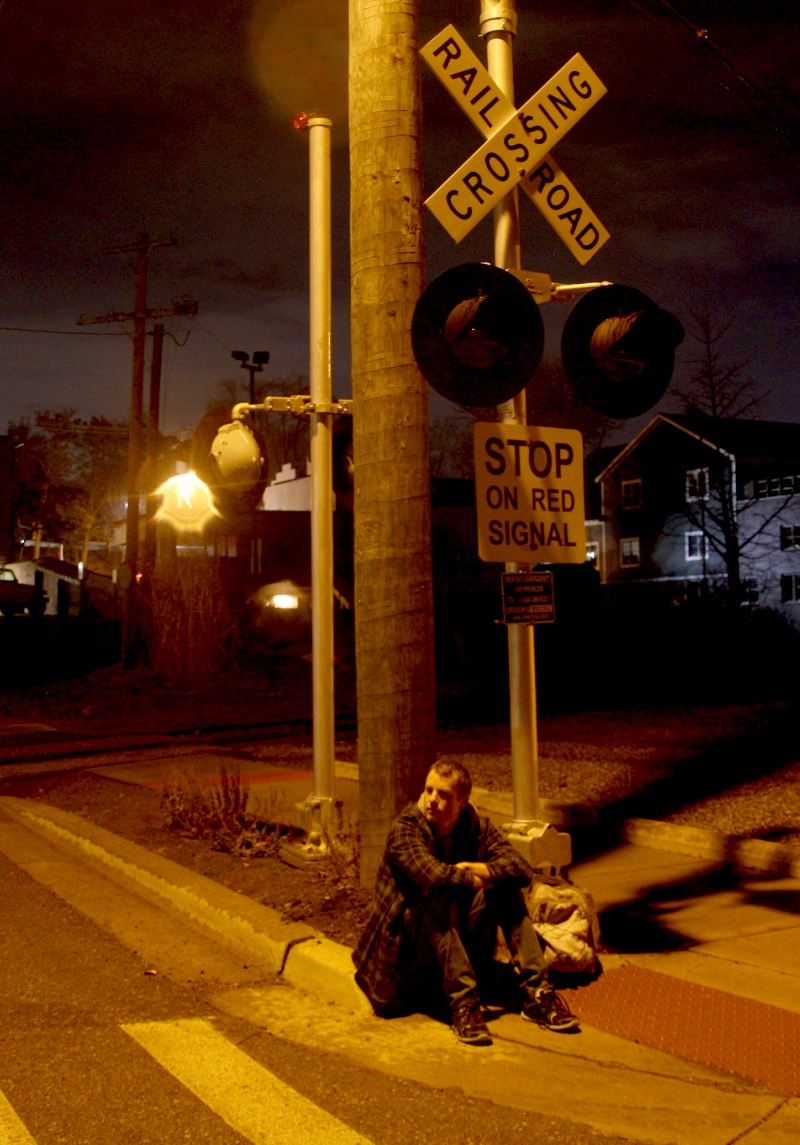 Christopher (Drew Shaw) in the Ann Arbor Civic Theatre's production of The Curious Incident of the Dog in the Night-Time. Photo by Tom Steppe.

Shaw remembers that his first acting performance was as a freshman in high school. He and his older brother played Wendy’s brothers in Peter Pan. He continued to act in high school, playing Oberon in Midsummer Night’s Dream as a senior. He did radio shows while in college on his way to a master’s degree.

“The radio show I absolutely loved because with my voice I could go here, there, and everywhere with it. My pitch is just immaculate,” he joked.

Shaw has a definite idea of Christopher.

“Christopher is 15 years, three months, and two days old. He likes to be specific, especially when it comes to his numbers,” Shaw said. “We were trying to piece together some of his past, and he was born with a disability, and with that would come some specific challenges and one of them would be he’s not quite the best with social and communication skills; however, he excels majorly in mathematics.”

Christopher relies on his dedicated teacher Siobhan to deal with his family problems. She suggests that he keep a journal that is the basis of Haddon’s book and, in a slightly different approach, in Stephens’ play.

“Siobhan is interesting,” Perez said. “You really don’t know that much about her. You don’t know Siobhan through the text of the play. I haven’t gone back to the book because I want to create my own character. That’s what really drew me to this role because I could think about who Siobhan was even if no one else knows her back story. Siobhan is Christopher’s teacher. The way we’re interpreting it is that I’ve been working with him for two years at the school. I’m very encouraging of Christopher’s intellect and the things he naturally gravitates toward but also encouraging him to write and go outside his comfort zone.”

She said she wanted to avoid presenting Siobhan as a “Miss Honey” character, the good-natured character from the play Matilda.

“I used to work with teenagers, students at a school very much like the one that Christopher describes,” Perez said. “And so, the challenge for me in this process has been using that to inform some of what I’m doing, but also to think about this character and I’m not just trying to play myself on stage either.”

Perez recently returned to acting and has performed in Midsummer Night’s Dream and Much Ado About Nothing at Civic and Mary Poppins at Dexter Community Theatre over the last year.

Haddon’s book is Christopher’s journal. In Stephens’ version, Siobhan has Christopher create a play from his journal, and Christopher, Siobhan, and others read passages from the journal.

“There is an ensemble. Some play just one role, Siobhan, Christopher, his mom and dad, and then the other four play a bunch of other characters and they are all on the stage, all the time,” Mann said. “It just flows; there are 49 scenes in the play, but it’s only 90 minutes long, it just goes rapid fire from one to the other. It’s very different from the Broadway play. The Broadway play was amazing—they had stairs coming out of the floor and drawers that would open out of the walls and a subway station that opened up.”

The staging at the Arthur Miller Theatre on the University of Michigan’s North Campus will be more abstract, built on nine blocks arranged at random with Rubik's Cube colors. Actors move the blocks and the few props that define a certain scene.

“What a dream to just say, 'I want this,' and you can have it,” Mann said, “But at the heart of the play, it’s a character-driven play.”

The main conflict is Christopher’s relationship with his volatile father.

“He is a person with a short fuse and it comes into play but, at heart, he is a good man in a tough situation and he gets overwhelmed and his way to act sometimes is like a powder keg,” she said. “When I was casting the show it was important to me when I was casting the dad that he saw the humanity in it first.”

Mann said she wants the audience to get wrapped up in the mystery and the Boone family problems.

“There might be some people who will figure things out early and they’ll love that because it is a whodunit mystery,” she said. “I think taking away that they had a great time and we did a good job, but it is a story of persevering and going after what you want.”

Perez hopes audiences see something of themselves in Christopher and his story.

“Everybody has a time in their life that seems like a turning point to them, where they discovered something about themselves or started to express themselves more or they felt more independent and that’s what this story is about, Christopher having that turnabout in his own life,” Perez said.

Civic will offer a sensory-friendly matinee at 3 pm on Saturday, Jan. 14, for neuro-diverse persons and their families. Sound and lighting will be adjusted to take into account the sensory challenges faced by neuro-divergent individuals.

The Ann Arbor Civic Theatre will present Simon Stephens’ theatrical adaptation of Mark Haddon’s novel "The Curious Incident of the Dog in the Night-Time" at 7:30 pm on Thursday, Jan. 12, 8 pm on Friday and Saturday, Jan. 13-14, and at 2 pm on Sunday, Jan, 15, at the Arthur Miller Theatre on the North Campus of the University of Michigan. For tickets, visit a2ct.org. Tickets are also available at the door beginning 45 minutes before each performance.