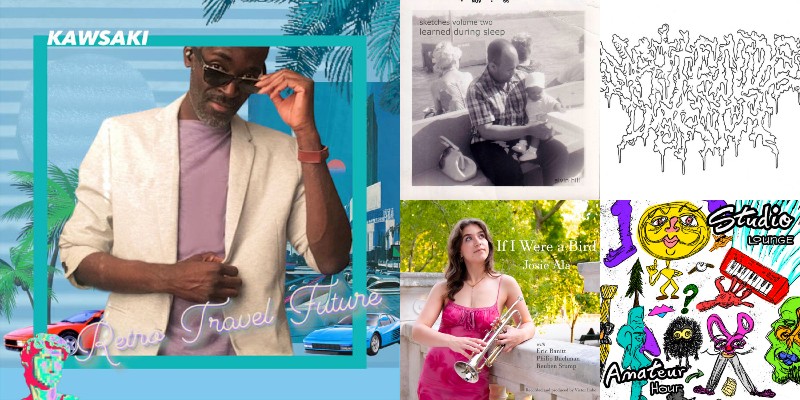 Kawsaki, Retro Travel Future
Kawsaki makes "contemporary retrowave that looks forward to future funk misted with vaporwave to create a sound that encompasses the past 45 years of synthesizer music"—or so I wrote in this 2021 interview with the Ann Arbor native and Detroit resident. That description applies to Kawsaki's latest album, Retro Travel Future, an imaginary trip to real places via songs such as "Internet Cafe Santa Fe" and "DC Metro Nights." If you're old like me and remember looking forward to watching the PBS TV show The Computer Chronicles in the 1980s, then you'll love this Kawsaki's music as much as I do. (Youngin's will dig these highly melodic, funky, and elegant synth jams, too.)

Josie Ala, If I Were a Bird EP
Windsor, Ontario's Josie Ala started playing trumpet after hearing Chet Baker, Miles Davis, and Louis Prima play. I don't hear any of Prima's wildman antics on this University of Michigan student's gently swinging debut EP, but the lyrical playing of Baker is definitely evident, and there's a touch of Davis' penchant for pinched tones. If I Were a Bird is thoroughly lovely and a terrific introduction to this up-and-coming trumpeter. (She plays regularly with the Paul Keller Orchestra at the  Zal Gaz Grotto Club, too.)

Studio Lounge, Amateur Hour
The debut album by Ann Arbor quartet Studio Lounge exists somewhere between jokey indie rock, lounge pop, and lo-fi kookiness. Parts of the record sound like it was recorded in a studio; other parts sound like it was recorded in a closet, particularly the wacky, often paper-thin vocals. Amateur Hour is a sonic shrug emoji, and I tip my cap to these dudes for leaving me baffled. RIYL: Ween (I think).

Alvin Hill, Sketches, Volume Two: Learned During Sleep
Ann Arbor educator, coder, and electronic-music producer Alvin Hill is back exactly a year after his last Sketches collection. As with the first volume, the music here consists of modular-synth improvisations and revels in the more conceptual side of electronic music, often forgoing groove in favor of pointillistic explorations of rhythm and texture. RIYL: Autechre and 1950s to 1970s experimental electronic music.

Unattended Death, Beat to Fuck EP
Ann Arbor's Unattended Death is a "gore-soaked one-man barrage of down-tuned grooving goregrind slaughter." The four songs on this EP live up to that description—giving the final Friday Five column of 2022 a brutal blast-beat goodbye.