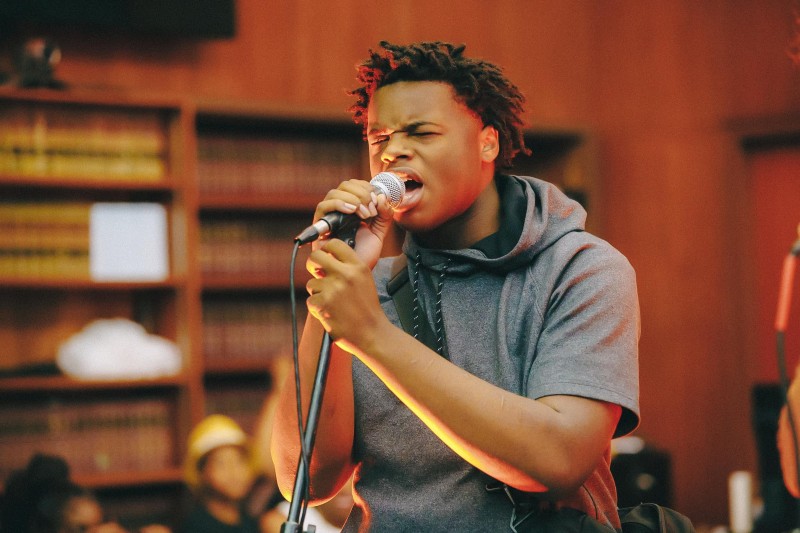 “Coming out of COVID, we’ve had to appraise our value of everything. In listening to the young guys, they’re using music to appraise their thoughts about relationships, school, and mortality,” said Rod Wallace, who co-executive produced the album with Jamall “Buff1” Bufford.

“We always say that kids are a lot more resilient than adults are … but in the same token, when they look back and when we look back at this time, it was a time the entire world transitioned in a way. This music is them making sense of that transition.”

To ease that transition, Wallace and Bufford reassembled an intergenerational team of men to write and record 10 cathartic tracks for Formula 734’s Volume II.

“We really bought into what the young guys wanted to do,” said Wallace, who’s also an Eastern Michigan University (EMU) educational studies doctoral student and a program director for the EMU TRIO Upward Bound program.

“I used it as an opportunity to try different things production-wise and mixing-wise … and to bring out the best in who they are and what they do. It was definitely a challenge, but it was worth it.”

To learn more about Formula 734 and Volume II, I chatted with Wallace about the album’s creation, tracks, and artists along with the hip-hop collective’s future.

Q: The first Formula 734 album documents life in Washtenaw County during the onset of the pandemic and the societal unrest in response to the death of George Floyd in 2020. How does Volume II serve as a snapshot of what’s going on today, especially for the younger artists?

I think that perfectly encapsulates what our young people are going through and what we’re going through as men, too. It comes out through the songs … and although me, Tru Klassick, Lewy Seifer, and Buff1, we rap on the project, but it’s really about the voices of our youth.

A: We started this [album] cycle in November 2021 and met every week to work on music. We also met with community members and musical artisans, including photographers, videographers, managers, and artists, and made music in the interim. We wrapped recording in February, and then in March, April, and May, we were producing and mixing the album.

We wanted them to bring in music and ideas that inspired them. We did that in a really big cluster in about four or five months, and we crafted the songs around what they wrote and recorded. When we recorded it, the chemistry and fun were definitely there.

The first album’s content spoke about subjects directly, including how money and masculinity affect us. This time they focused on creating scenarios and giving their thoughts about things as opposed to being “preachy.” This whole project brings people into the thoughts, mindset, decision-making, and wonder of [the artists] who are rapping about these things.

Q: What did the younger artists, including Lil Jay, Mansa RR, Giovanni, Seyno, AnimeKing, and others, help bring to Volume II’s creative vision and overall sound?

A: Lil Jay is a person who came into the process looking to learn. He’s like the main cheerleader in a way, and he’s the one who’s hypin’ everything up in our group chats. Mansa RR is very thoughtful and very mature; it’s very clear that he has been put in positions where he has to be resourceful outside of the studio.

Giovanni, who’s extremely talented, is kinda like a renaissance guy. He gets good grades in high school, and he’s an athlete and a poet. He’s very gifted in the things that he’s doing and very competent, too. Then you have Seyno, who doesn’t rap on the project, but he does make some beats and adds some production. He’s very brilliant, and he’s a mad scientist already when it comes to production. AnimeKing is very thoughtful and poetic … he uses his songs to put emotions out there in a way to understand his own emotions.

Q: What was it like to mesh different hip-hop sounds and beats on Formula 734’s Volume II, especially from the younger artists?

A: We really allowed their influence to guide the way for us this time. From a production standpoint, I tried to explore a lot of modern sounds, trap, and deep bass. It really was good for me because it gave me a chance to snap into a different space.

If I’m left to my own devices, I’d still be making boom-bap records like it’s 1996. It’s the best music of all time, and people will still see that influence on this record, especially on “Chosen” and “It’s Over.” Those are still “boom-bapish” records, but we allowed them to drive the ship. They picked those records … and the “It’s Over” record was a beat that I made back in 2016.

I sent it to everybody to listen to it and say, “Hey, I wanna make a song that’s kinda like this … we’re gonna talk about gun violence. You should start writing something like this, and we’ll change it up later.” They loved the beat, and we ended up using it.

Q: Several tracks, including ““Start of My Day” and “It’s Over,” highlight overcoming obstacles and learning how to persevere. How do these tracks encourage people to achieve their goals and create their own successes?

A: On “Start of My Day,” this guy gets up in the morning and gets on the bus, and these things happen over the course of time. The plausibility of what happens is a day-by-day thing, and it’s a possibility. I think that’s the different perspective that we took, and we really got that from the guys. They wanted to paint this picture that’s a little more abstract than saying, “Hey, you should be nice to people,” or “Hey, you should do this, or you should do that.”

“It’s Over” is probably the song that belongs the most on the first album just because of how it’s structured. That was the last song we recorded, and we felt like it was necessary in lieu of the climate over the summer and what was going on. It really struck Buff1’s heart to make a song that kinda spoke to that.

I’m always in a position where I’m saying, “Hey, you know what, you need one more song before we can tie it up,” because every album is a story. If you look at the continuum between Lil Jay at the beginning on the first song “Dark Nights” being very forlorn and uncertain about things to being a lot different on the last song “Kingz.” It ties a nice little bow on everything.

Q: How did “Billfolds” come about for you and Jamall “Buff1” Bufford?

A: On it, I’m talking about the fact that we can’t dismiss these new styles of music that people are making. We also can’t dismiss people just because we think we’re sitting all high and have high moral ground. I understand what it’s like to be young … and I know what it means to be underestimated.

What Buff1’s talking about is that “it takes more than billfolds to heal souls.” We’re in an environment where there are a lot of resources, grant opportunities, and programs that float around and are intended to help young people, but they also [support] the pockets of people as well. People are drawing salaries and things from doing these things, and … the spirit of it is being lost in politics and all kinds of stuff.

It will take more than us just giving them the ability to make music to really make a change in their lives. We have to actually be a part of it; they have to see us fail at it, learn from it, and really put forth the effort. That’s why that song is important because they get a chance to see how we work, and hopefully [we] just provide them with a little extra offer to say, “Well, if they’re doing this, and they’re going this hard, then I need to go hard as well.”

Q: Are there any plans for another Formula 734 documentary with Creative Fluidity and Fred Culpepper?

A: We did film the recording of this album. Hopefully, it will be out early next year. We knew the first documentary was different and significant, but we had no idea it [would get festival recognition]. It is pretty phenomenal; I never anticipated it because I just want to make the music.

A: The option is open for them, and we’re in support of them. When you have Tru Klassick and Lewy Seifer that are in support of things … they both have connectivity with venues and showcases that have a legacy of success. They have all the infrastructure around if they choose to do that. I do anticipate that they will continue to follow that pathway, but everybody has a lot of busyness going on right now. They’ll figure out that, but we’ll be here to support whatever they choose to do.

Q: What is the future of Formula 734? Any plans to record and release a Volume III album?

This collaborative music-making as a tool of identity-making and social discourse is something that’s key to the next stages of my career. The work that I’ve been doing for my PhD involves using this same method, but using it with Black men who are educators … to not only discuss their experiences and what they believe possible solutions could be in schools, but also the recruitment of more men of color to go into education.