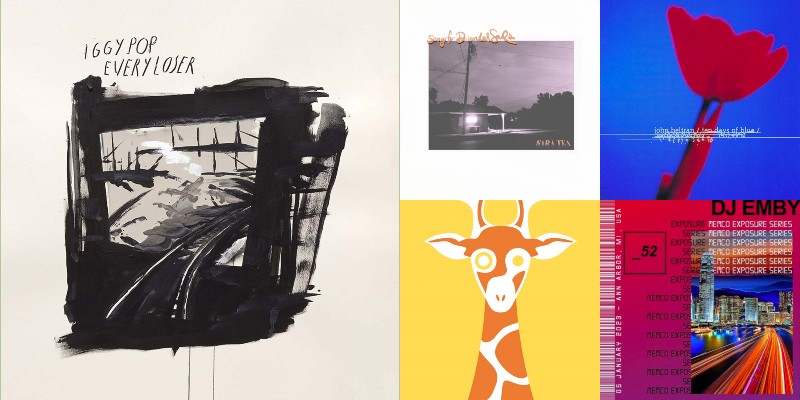 Iggy Pop, Every Loser
In 2016, during the promotion of his record Post Pop Depression, Iggy Pop said he was done making albums. Or maybe he meant rock records because in 2019 he released Free, an experimental electronic record. He also continued lending his voice to a variety of collaborative songs and EPs as well as hosting his adventurous BBC radio show. But producer Andrew Watt must have waved a magic wand and convinced the now 75-year-old Pop to climb up that rock and roll with one more full-length record filled with guitars and stars. Like Post Pop Depression, which featured members of Queens of the Stone Age and Arctic Monkeys, Every Loser is essentially a "celebrity rocker group hug," as the headline for Kitty Empire's review in The Guardian referred to Pop's latest LP. Empire was more withering in the body copy: "Every Loser is another one of these celebrity wax jobs, where stars rally round and Pop plays to type." The stars who rally round and come out to play this time include the core of Guns N' Roses' Duff McKagan and Red Hot Chili Peppers' Chad Smith along with spots by former Chili Pepper Josh Klinghoffer, Pearl Jam's Stone Gossard, late Foo Fighters drummer Taylor Hawkins, Blink-182's Travis Barker, and a trio from Janes Addiction: Dave Navarro, Eric Avery, and Chris Chaney. And Pop does play to type, spitting schoolboy lyrics in an elderly growl. Every Loser is getting some decent reviews, but it's not an album I'll ever need to hear again. But if Iggy enjoyed making it, more raw power to him.

Sara Tea, Songs for Discarded Souls EP
Trip-hop by way of Chelsea, Michigan? That's the case with singer-songwriter Sara Tea's EP, Songs for Discarded Souls, which seems to take its indie-tronica cues from the torch-songs-meets-hip-hop approach of Portishead, with a hint of Mazzy Star. Tea started writing and recording the five emotionally charged tracks on Songs for Discarded Souls by herself during the pandemic, with other musicians adding their sounds later, including Fred Thomas, who mixed and mastered the music at Ravine Studios in Ann Arbor. (While this is the first release on Tea's Bandcamp page, she's been on the music scene as a performer and DJ for two decades.)

John Beltran, Ten Days of Blue
This 1996 album by Ann Arbor's John Beltran gets a vinyl and digital reissue—and a legal one this time as the 2018 edition was not authorized by the artist. It's a terrific techno album that touches on ambient, world music, trance, and industrial without lingering for too long on any one of those genres, and seems to be a favorite among Beltran's fans.

DJ Emby, Exposure Series: 52
Always a joy when a new MEMCO mix drops and DJ Emby's entry in the series is a banger. The majority of the 41-minute blend is partry-centric, often utilizing dance mixes of pop hits. Some of the tunes I noted: Trey Songz's "Bottoms Up." Jojo's "What U Need," Drake's "Hotline Bling," Exmag's "Tilt Mode," Rihanna's "Rude Boy," Megan Thee Stallion's "Body," Jonas Brothers' "Sucker," Bruno Mars' "Treasure," Lizzo's "About Damn Time," Katy Perry's "Birthday," and Wildchild's "Renegade Master."  But the most surprising was the expert layering of The Beatles' "Twist and Shout" over Daft Punk's "One More Time." Top panache.