Funky Flights: Chirp to welcome 2018 with a new album

"This is for all you strutters out there," announced Jay Frydenlund midway through Chirp’s headlining set at the Blind Pig on Saturday. On cue, the Ypsi-based quartet of fusion rockers launched into a swaggering, deep-pocket jam ("Dickerville") that sent an obvious ripple through the crowd as folks remembered what they came for and got their boogie on. 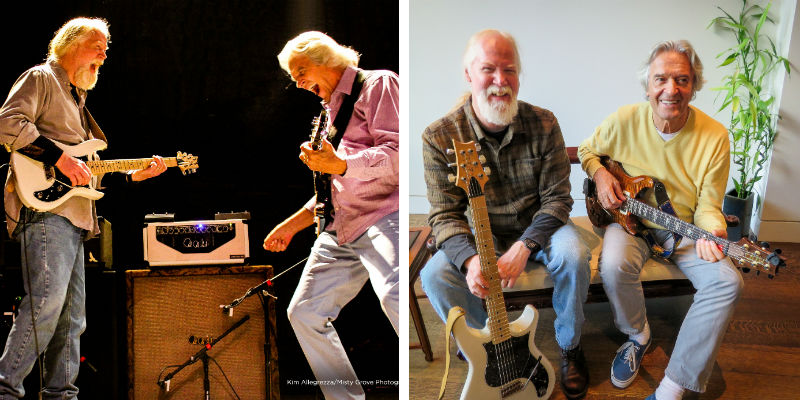 Jimmy Herring (left in both photos) played a set with his new band, The Invisible Whip, before joining John McLaughlin and The 4th Dimension to fire up some Mahavishnu Orchestra burners. Photos by Kim Allegrezza/Mistry Grove Photography (left) and Ina McLaughlin (right).

John McLaughlin’s farewell tour bus pulled into Ann Arbor on Wednesday night and delivered the goods with a program titled Mahavishnu Revisited. McLaughlin was backed by The 4th Dimension for most of the show, with openers Jimmy Herring and The Invisible Whip joining them on stage at the Michigan Theater for a symphony of sound dedicated to exploring the music of Mahavishnu Orchestra.

The show opened with a set by Jimmy Herring (Aquarium Rescue Unit, Widespread Panic) and his new band, The Invisible Whip. Herring ambled onstage with little pomp, clad in drab flannel and looking like a rock 'n' roll Johnny Appleseed. His band followed and they launched right into a gritty blues jam. Throughout the entire set, the band spoke not a single word from the stage, letting the music do all the talking.

The Invisible Whip is a quintet: guitar, bass, drums, Fender Rhodes, and organ/clavinet. Jason Crosby was a standout on Rhodes, and peppered the set with occasional violin as well, never losing the pied-piper twinkle in his eye. The band dusted off some older tunes from Herring’s solo albums, Lifeboat and Subject to Change Without Notice, interspersing them with new compositions he has been working on for their debut record as The Invisible Whip.

It was a playful set with a lot of textural variety. Matt Slocum’s swampy B3 grooves and Crosby’s crunchy Rhodes set the table for soaring solo work by Herring, while bassist Kevin Scott and drummer Jeff Sipe propelled the band forward. Mixing genres with freewheeling ease, they treated the Michigan Theater like everything from a jazz club to an arena. The mood was one of joy and mischief, a vibe I hope the upcoming record captures. After a no-holds-barred hard-rock closer, bassist Scott tried to introduce the band through a dead mic. When no tech support was forthcoming, he glanced over at Herring, who simply shrugged before giving the audience a grin and a wave, then shuffling offstage.

McLaughlin and The 4th Dimension arrived on the scene after intermission to a thunderous welcome. They made it clear they were saving the Mahavishnu material for the third set -- a joint performance by both bands -- by playing a range of selections from McLaughlin’s solo career as well as their collaborative work as The 4th Dimension. Among the more recent compositions was a tune intended for Paco de Lucía called "El Hombre Que Sabía (The Man Who Knew)," which McLaughlin performed in the flamenco guitarist's memory. The current iteration of the 4th Dimension includes longtime McLaughlin collaborator Gary Husband, bassist Étienne M'Bappé, and drummer Ranjit Barot.

Husband -- who is equally at home behind a drum set or keyboard -- brought a drummer’s sensibility to the keys, unleashing their full percussive potential. M'Bappé, meanwhile, demonstrated his willingness to open the wormhole with a galactic bass solo in the third tune of the set. For his part, Barot charted a steady course through rhythmically shifting waters with a combination of drum kit and vocal percussion.

It is always a thrill to see such virtuosic musicians pay so much attention to one another and stay so completely engaged even when sitting a section out. Throughout both The 4th Dimension set and the Mahavishnu supergroup finale, any time a given performer was less involved in whatever was happening musically on stage, they counted out mixed-meter rhythms with exaggerated claps and hand motions. Besides simply being entertaining to watch, this helped them keep hold of the complicated rhythms while also making the time signature clearer to the audience.

Needless to say, McLaughlin himself was in his element. He handled himself with composure and grace but certainly wasn’t afraid to let on that he was having a blast. Never letting his signature rapid-fire technique overshadow his dynamic musicality, he provided loose direction to the ensemble, intermittently conducting with capricious hand gestures. The performers sharing the stage with him were hyperattentive to his signals. This was especially evident when Herring and the Invisible Whip returned to the stage to conjure the spirit of the Mahavishnu Orchestra.

Herring, Crosby, McLaughlin, and Husband played blisteringly fast and involved lines in jaw-dropping unison, as though drawing them out from some deep, commonly held source. The crowd was fully engaged at this point, leaping to their feet after nearly every piece. McLaughlin and company had come prepared to please. The exuberant closing set sampled evenly across the Mahavishnu Orchestra’s best-loved and most iconic material, from The Inner Mounting Flame and Birds of Fire to Visions of the Emerald Beyond. Some standouts were "Meeting of the Spirits," "The Dance of Maya," and an expansive rendition of "Eternity’s Breath."

Goodbyes can be tough, but McLaughlin summoned up a fond and generous farewell for the fusion lovers and Mahavishnu followers of southeast Michigan.

Nicco Pandolfi is a freelance writer and a graduate student in Information Science at the University of Michigan. He mainly writes about what he mainly thinks about: music and food. 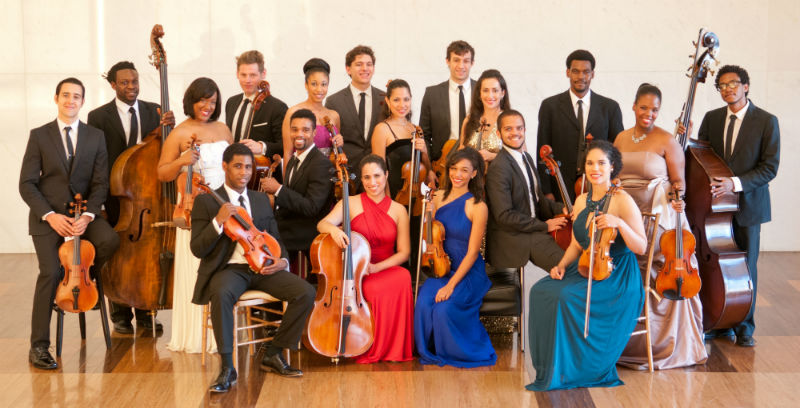 Sphinx Virtuosi is comprised of 18 of the top black and Latinx classical soloists in the country. Photo by Kevin Kennedy.

Based in Detroit, the Sphinx Organization is committed to promoting the transformative power of the arts through diversity and inclusion. The Sphinx Virtuosi ensemble is comprised of 18 of the top black and Latinx classical soloists in the country, all of whom are alumni of the prestigious Sphinx Competition that the organization holds annually in Detroit.

As Jessie Montgomery, the current concertmaster of the Virtuosi, noted during Sunday’s concert, another key priority of the Sphinx Organization is to support new work by composers of color, whose voices which are vastly underrepresented (accounting for barely 1% of the classical canon, according to Montgomery). 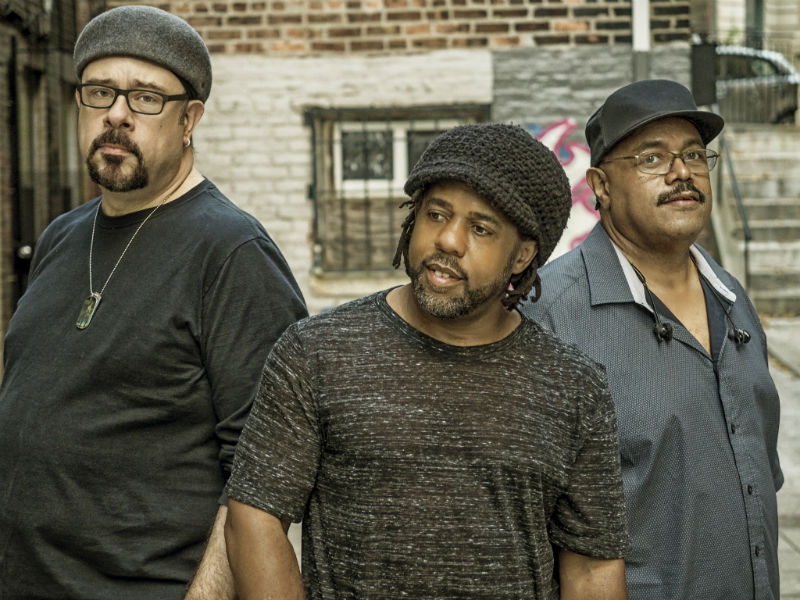 Bob Franceschini, Victor Wooten, and Dennis Chambers exploded with joyous music at The Ark on Oct. 26.

Bass wizard Victor Wooten had a sold-out crowd craning forward in their seats to hear note one last night at The Ark. When the first downbeat came, it was followed in short order by a slipstream of ringing harmonics that quickly resolved into a deep-in-the-pocket groove. Although that groove would evolve and shapeshift throughout the evening, it would never fade entirely.

Wooten was joined by master drummer Dennis Chambers (of Parliament/Funkadelic and Santana fame) and saxophonist Bob Franceschini. The trio is on tour supporting the release of their new album, Tryptonyx, a genre-b(l)ending tour de force that showcases each musician’s considerable technical chops without ever losing sight of the pure joy that funk can bring.

Grammy-nominated and Hammond-endorsed organist Brian Charette’s music encompasses a jostling, unruly mix of influences and timbres. While powered by groove-centric basslines, peppered with blistering bebop licks, and firmly grounded in the Hammond B-3 canon, Charette's sound also includes crunchy waveforms flowing from an array of analog synthesizers and custom electronics in his Circuit Bent Organ project.

Fresh off the summer release of its latest album, Kürrent -- which one reviewer described as the kind of soundscape that might result if Jimmy Smith and Kraftwerk collaborated on the score to a ‘80s video game -- two-thirds of the Circuit Bent Organ Trio returned to the Kerrytown Concert House on Monday, Oct. 23, to showcase some new tunes. The pared-down duo format left plenty of auditory space for the kind of sonic exploration and experimentation that Charette clearly thrives on, and Jordan Young’s sensitive and dynamic approach to the drums provided an impactful and grounding counterpoint.

Comprovisation: Julian Lage and Chris Eldridge Live at The Ark

Guitar maestros Julian Lage and Chris Eldridge gave Ark-goers a show to remember on February 27, deftly weaving a rangy array of influences into a coherent and lively musical conversation.

Equally at ease in the company of jazz greats (Gary Burton, Fred Hersch) and bluegrass luminaries (Béla Fleck, David Grisman), Julian Lage continues to cover new ground while honoring the traditions that have informed his evolution as a musician. Chris “Critter” Eldridge is no slouch either, having cut his teeth on the national stage with The Seldom Scene and the Infamous Stringdusters before bringing his nimble and artful guitar work to the inventive, genre-bending Punch Brothers.

While much of the duo’s 2015 effort, Avalon, featured Eldridge’s vocals, their latest, Mount Royal (released last week) carves out more space for the interplay between the voices of their vintage Martin guitars. This heightened focus on instrumental improvisation, evident in concert, was a key driving force behind the songwriting process for the new album, which Lage and Eldridge discussed in greater detail with Pulp last week.