Review: Kaki King at The Ark 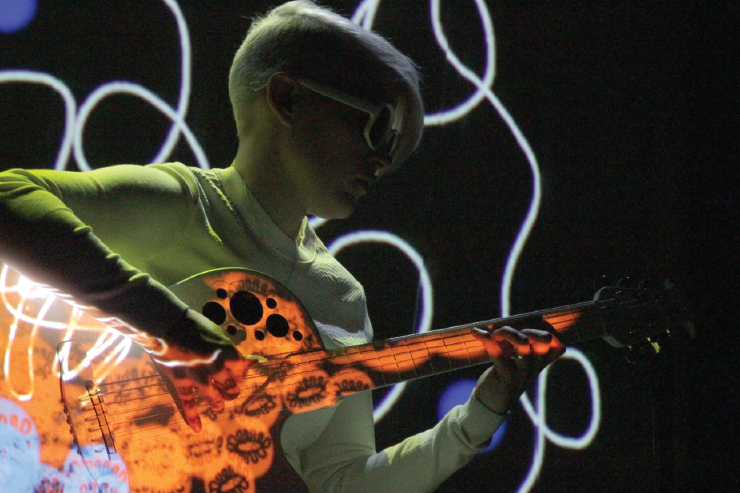 Kaki King performed on a specially made projection guitar. Photo by Randy Gunter.

On a frigid, January night in Ann Arbor, Kaki King warmed up The Ark with her unique brand of guitar theater. She currently tours with a projection guitar—images from a screen behind her mesh and mingle with similar moving images on her axe. Here is an artist who has embraced the visual age and incorporated our insatiable fixation with ocular stimulation into her performance.

Kaki King’s guitar work is singular. While stylistically divergent and favoring an acoustic, she is a virtuoso in the vein of Pat Metheny or perhaps Jaco Pastorius (who worked a bass, but you get the point). She finger-picks her instrument with artistry and technical precision—if she misses a note, it sounds intentional. Her textures range from experimental jazz to avant-garde folk to hip-hop. Dave Grohl has sung her praises.

King opened with some somber noise numbers—an inquisitive start to her performance-art narrative—then gradually intertwined musical sleight-of-hand with carefully selected moving pictures. She followed with some incredible noodling skills (almost unfair to use jam-band terminology, but words fail) with just a touch of funk and percussion. The performance crescendoed with a visual, captioned story about her ivory-colored guitar over a mellow hip-hop beat. The vignette also served as personal backstory for a musician who has clearly fought to assert her eclectic nature.

Her latest album, The Neck Is A Bridge To The Body, released in 2015 on the Short Stuff label, is her eighth full-length album, and showcases an artist who is ever-evolving and ever-evading the status quo. Her earlier work was a bit more straight-ahead; she has preferred more uncharted corners of the musical universe since her first two albums (Everybody Loves You, Velour, 2003 and Legs To Make Us Longer, Red Ink, 2004).

While originally from Atlanta, King espouses a New Yorker’s sensibility. She has a song entitled “Carmine Street” (off her debut album) and the accompanying visuals for one song on the night were clearly of NYC mise en scene (including a sign for Carmine Street, which lies just north of Houston in Greenwich Village).

Her insistence on free-flowing jazz and artistic reverie can be infuriating, even inaccessible, but her mastery of her craft must be appreciated. The house was certainly entranced and intrigued and stuck around for her annotations afterwards. King rarely features vocals (when included, they are often from guest artists), so it almost seemed like breaking the fourth wall when she spoke to the audience after her set. Kaki King offered an unpredictable art installation alongside her music—her work and live performance are equally compelling.

M.F. DiBella contributes to Current Magazine and Found Magazine, and blogs at 1lessblog.com