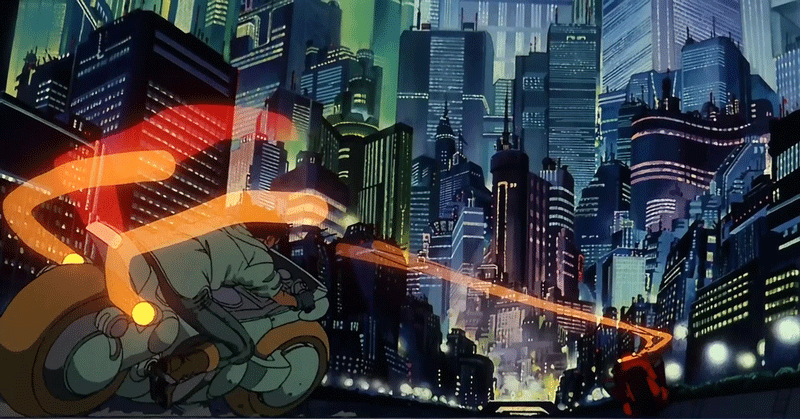 Akira plays Wednesday, April 6 at 7:00 PM at the State. Part of the CineManga Film Series.

Akira (1988), directed by Katsuhiro Otomo, and based on his 6 volume manga series of the same name, was my first non-Studio Ghibli feature length anime. As a dedicated fan, I grew up watching Speed Racer and Rurouni Kenshin, and after seeing Princess Mononoke, became obsessed with watching every Studio Ghibli film I could. I had never branched out to other anime films, but after reading a few books on early anime and its cultural impact, I decided that Akira sounded like a good intro to everything non-Studio Ghibli. So I borrowed a copy from AADL (the 2 disc collector’s set), and sat down to watch it, not knowing quite what to expect. And then I watched it twice. And then I watched the excellent documentary about the creation of the film on the second disc. After that I caved in and bought my own copy, plus the soundtrack. Visually, technically, and artistically Akira just blew me away.

The film takes place in 2019. Old Tokyo was destroyed in a cataclysmic explosion during WWIII, and Neo-Tokyo was built in its place, and the world we are shown is harsh. The divide between the rich and the poor is very obvious. Political factions fight each other for control of the government, anti-government revolutionary groups protest and set off bombs, and biker gangs openly feud in the streets. The scope of the story is huge, which is not surprising when you consider that over 1,000 pages of manga had to be condensed to a film that runs about 2 hours. What grounds the plot are Kaneda and Tetsuo, two friends living in Neo-Tokyo, and their individual struggles with power. All of the plots of Akira ultimately boil down to whether or not power, either in the hands of the government, revolutionaries, or children with psychic abilities, is used responsibly, and the repercussions of that use.

Although the story and characters are nuanced and compelling, the art and technicality of the animation is the real star. Akira is simply visually stunning, but in a way that is jarring and disturbing. This film is unashamed to show a gritty, dirty, and unattractive world, right down to images of garbage in the streets and a plethora of garish neon advertisements. There are no beautiful sweeping vistas of nature or effort to show Neo-Tokyo as a tastefully designed metropolis. Instead we have scenes of extreme violence that go hand-in-hand with fantastic visuals. A fight between two rival biker gangs at the beginning of the film is as shocking for the blood and broken bones as it is for the color trails of the motorcycle’s tail lights as they speed through the city. A building is completely destroyed in a psychic attack while broken glass from the windows glitters and dances as it falls to the ground. Even the characters facial and mouth movements, which were animated to closely match the movements of the voice actors using a technique called pre-scored dialogue, lends a realism that is not seen in other animated films of this time.

I would also be remiss not to mention the excellent score composed by Shoji Yamashiro. With an innovative blending of traditional Japanese instruments, electronic sounds, and the human voice, the soundtrack creates an immediacy and vibrancy to the action. Akira did not skimp on production values, and it shows. This is not a film to be missed on the big screen, from the shocking explosion at the beginning to the grotesque and extremely bizarre ending. If you are a serious, or even casual, fan of animation, you need to go and see this film!

Marisa Szpytman spends her days working at the Detroit Institute of Arts and she has been in the same room as a spoon once owned by Vincent Price. The CineManga Film Series continues through April 27 on Wednesdays at 7 pm with the following screenings at the State Theater: Akira on April 6, Space Battleship Yamato on April 13, Paprika (Papurika) on April 20, and Tokyo Tribe on April 27. You can find more information on the Michigan Theater's CineManga page.

Don't forget to check out the Japanese style concessions (the elusive green tea Kit Kat!) and Vault of Midnight's pop-up store in the State Theater's lobby. Each show features a special pre-show primer by a certified manga expert to further convince you that these films are awesome!