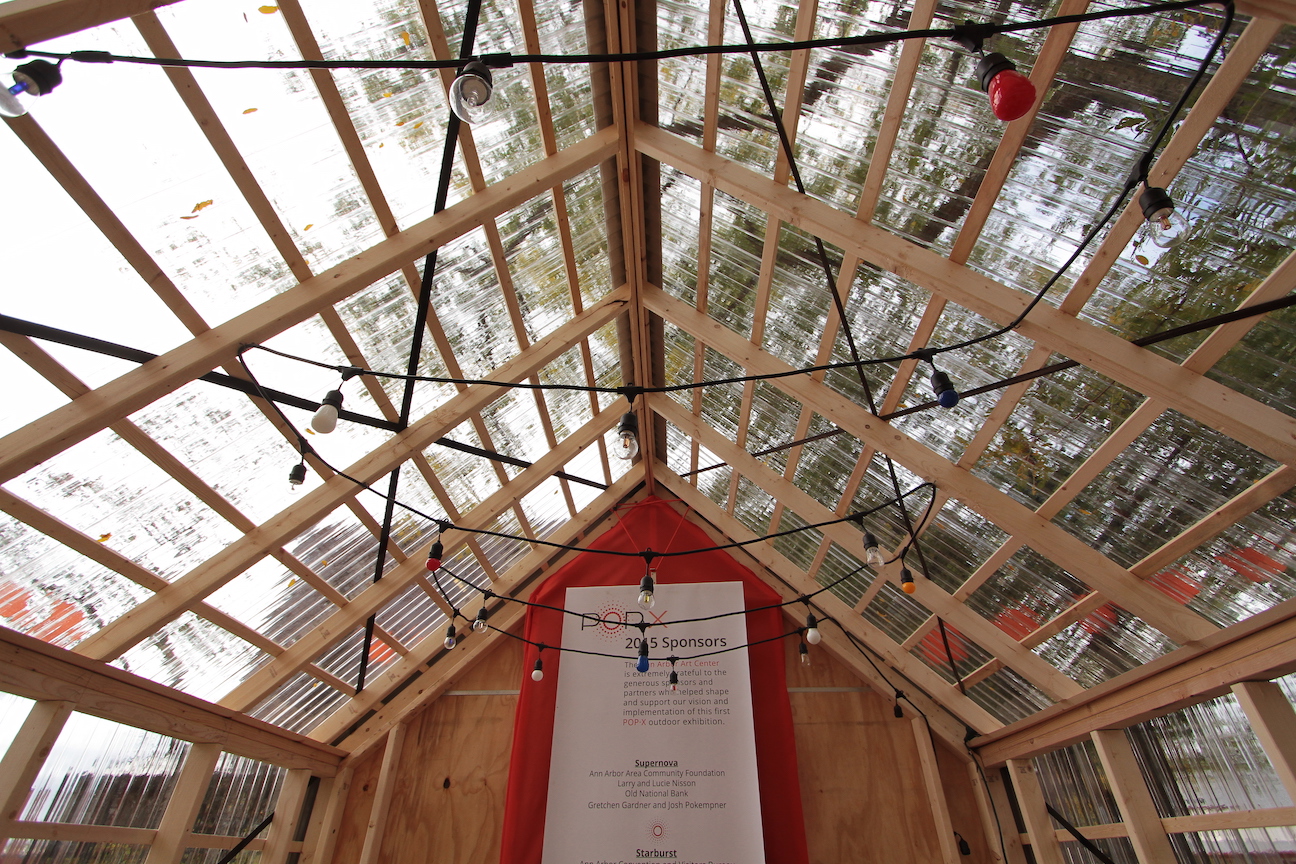 POP•X is real art in real time. And it’s an idea that’s been long overdue as Ann Arbor’s been inching its way towards this sort of event for some time now. After all, in the sphere of local music, Water Hill’s now established spring music festival has shown us how this sort of spirited activity can be handled on what is a seemingly near ad hoc basis. In this instance, POP•X is telling us in quite vivid terms: Create and they will come. During a recent midday visit at the start of the event, I saw Ann Arborites of all ages, all incomes, and all backgrounds; all crafting, browsing, and participating in what would have seemed an unlikely set of circumstances just days before.

Using Liberty Plaza as its base, POP•X effectively has melded a cluster of arts activities that have been percolating historically. But it’s also done so with a bit of Tree Town spirit.

For one of the most dispiriting effects of the 20th century visual arts has been the progressive commodification of aesthetics. Read any report about art anywhere and there’s either a subtle (or often not so subtle) reference to the monetization of the visual arts. It’s no secret that big art can wheel about untold millions of dollars with the stroke of a pen or the slam of an auctioneer’s gavel and it’s very often seemed as though this is meant to be the end product of the artistic activity.

As a result, this reification of art’s value has put a price tag on all artful activity with a grimness that squeezes joy out of the market. Art can be big business and engaging in art can be to participate in big business. It is not accidental that someone with as clever a sense of humor as Andy Warhol decided in his time to reflect this ultimately simple-minded commodification.

Well, to use a telling cliché, POP•X puts paid to this notion. Like Water Hill Music Festival—and unlike the now merchandizing effort of each summer’s local art fairs—this event is a free-for-all of artistic opportunity. Granted, it took a consortium of like-minded individuals at all levels of the regional arts market to gather themselves towards this end. And it ultimately took the nuanced and steely courage of professionals and visionaries like Omari Rush and Lucie Nisson to organize the event as well as seek and/or provide the funding. But the synergy once released has taken on a community-tinge that’s unmistakably organic.

For example, the very nature of the buildings crafted to house the individual projects in POP•X is unmistakably, and deliberately, unrefined. And the repurposing of these structures after the event ends calls into mind this very orientation: Waste not, want not.

But even more astute is the nature of the project itself.

POP•X isn’t an under-conceptualized happenstance; rather, the very nature of the project follows a clearly delineated path of artful logic in modern and post-modern art that’s been percolating for decades now. The event mirrors two of the more outrageous innovations of mid-20th century Neo-Dada—the notions of the Happening and Environmental Art.

The Happening, a sort of odd participatory aesthetic has always been subversive in its insistence on the involved hands-on element of creativity. Rather than surrender to the notion that art must be respectful (in other words, passively sitting on a gallery wall or be passed around dollar for dollar), the accomplices of this art form yield to the collective experience of the event. A sort of late-blooming offshoot of Dada, the Happening sought to push the boundaries of art in much the same way that Luigi Pirandello and Bertholt Brecht sought to push the boundaries of theatrics: Participating in the event is the art form.

Likewise, another 1960s offshoot of Neo-Dada, Environmental Art, also sought to widen the physicality of art itself—and hence, the expansive nature of art. As POP•X happily shows us, the very creation of this environment lays a foundation upon which everything else rests. As such, in some of the units, professional artists have invited the public to participate in the creation of the art activity itself, while other groups or individuals have mounted installations through which we can participate.

The end result is a heady optimism that’s infectious and it’s this invigorating cheerfulness that most succinctly describes the atmosphere of this event. And like all environmental give and takes, what one encounters will be dictated by those who are there at the same time. It’s therefore going to be useful to visit the installation site occasionally—and certainly at differing times—to absorb the varied populations that inhabit this artistic fishbowl.

Just don’t expect POP•X to conform to the tried and (supposedly) true formula of the contemporary visual arts. For its multidimensional psychological and physical bearings embroider the varied elements of the contemporary arts. There’s going to be a bit something different here for everyone.

Little surprise then that yet one final cliché fits the parameters of POP•X.

Perhaps for the first time in a long time, our local proponents of the visual arts have banded together to acknowledge a fact about art that a city the size of Ann Arbor has seemingly been built to express: It’s taken a village to express Ann Arbor’s attitude about contemporary art.

Here’s hoping this remarkable achievement is but the first of many such activities that will take place in our future.

POP•X is an annual ten-day festival presented by the Ann Arbor Art Center. POP•X 2015 was Thursday, October 15 – Saturday, October 24, 2015 from 10 am to 8 pm at Liberty Plaza Park, 255 East Liberty St, Ann Arbor. To learn more visit popxannarbor.com or the POP•X Facebook event page. POP•X is free and open to the public.
Sign in to comment