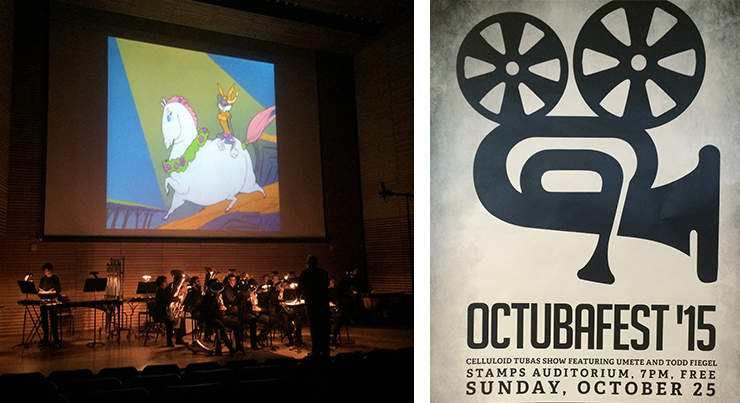 Octubafest brought film and horns together for Celluloid Tubas

There's so much going on in town every weekend, it's easy to overlook the multiple waves of consistently astounding student recitals coming out of the UM Music School. But to do so risks missing some extremely rare opportunities to hear top-notch musicians tackle enormously exciting and engaging work, such as last weekend's simply jaw-dropping Celluloid Tubas performance, put on by the University of Michigan's Euphonium and Tuba Ensemble (UMETE), led by visiting conductor and arranger E. Todd Fiegel.

Fiegel and UM Tuba & Euphonium Professor Fritz Kaenzig met as students and have remained friends ever since; Fiegel arrangements and appearances have been periodic features of Octubafest concerts over the years. Fiegel is a lifelong fan of film and film scores, and has brought his challenging and faithful arrangements of famous film themes to brass ensembles across the country through his Celluloid Tubas and Celluloid Brass series. The program for last Sunday's recital at the Stamps Auditorium on North Campus featured eight of Fiegel's arrangements of famous film themes for Professor Kaenzig's ridiculously talented Tuba & Euphonium students, accompanied by a team of five percussionists, each set of pieces played in sync with video.

It's not unheard of for a live ensemble to play along with a video; in fact there are several touring arrangements of video game or film music, such as the Legend of Zelda tour (that comes as close as that town to the south in 2016), and most of these shows use a digital click track in earphones, or a special video feed for the conductor, to show exactly when each beat must happen for the music to stay in sync with the video. The Celluloid Tubas Show utilized no sync tools at all; Feigel simply watched the video on the screen along with the audience, and conducted the ensemble to keep the music matched up with the action. This was an extremely impressive feat, demonstrating Feigel's deep knowledge of the scenes and the scores, and while not every beat was precisely perfect, the musicianship on display by the conductor and the ensemble was simply staggering.

Starting off with a suite of themes from Bruce Boughton's score for Silverado (1985), the richness and warmth of a Tuba & Euphonium ensemble was immediately on display, very well suited to the panorama-evoking score from the film and the Coplandesque open harmonies that are shorthand for cowboy movies. Beef, it's what's for dinner. Feigel carefully set the stage for each section, explaining what was going on with the plot and how the score amplified and reflected the emotions, while lovingly protecting the audience from spoilers, such as that Kevin Kline would not die in the climactic gunfight against Brian Dennehy.

The next piece was a very famous sequence from 1955's The 7th Voyage of Sinbad: the epic Skeleton Fight, scored by Bernard Herrmann, who went on to score most of Hitchcock's best films, including, as Feigel noted, the music-less score of The Birds. The ensemble did an amazing job with a very difficult piece, and my post-millennial 13 year-old son was also astounded by the quality of Ray Harryhausen's entirely hand-animated special effects. Even all these years later, that post-production Skeleton is convincing in a way of which Jar Jar Binks can only dream.

The first half of the concert featured what Feigel described as "Two vocal soloists at the top of their game," in an arrangement he calls It Ain't Over 'til the Fat Instrument Plays. My son and I had this one pegged for What's Opera, Doc? from the moment we got the program in hand, and we were delighted to be right, with the original vocal performances carefully separated from the original music and accompanied by the power of an ensemble of which Wagner could barely have imagined. Also, it was only 5 minutes long, which Wagner certainly could not have imagined.

The second half began with one of the most famous fusions of animation and music ever produced, Paul Dukas' The Sorcerer's Apprentice. Arranging this woodwind-heavy piece for a low brass ensemble truly showed off Feigel's chops as an arranger, as well as the ranges of the performers, but the truly impressive feat was the timing of the very specific, spread out beats at moments in the short, such as when the splintered broomsticks come back to life, or the final potch Mickey receives at the end of the short. Every single pulse of the music is evident in Disney's animation, and the ensemble nailed them all.

Of course, you can't do a program of Movie Music without something by John Williams, and Fiegel brought three outstanding picks from Williams' catalog. Send in the Clones is the score of the final scene of the otherwise execrable Attack of the Clones, where the famous Imperial March is heard for the first time, a piece extremely well suited to the naturally sinister Euphonium. Then, after a beautiful but undeniably maudlin excerpt from Saving Private Ryan, the ensemble launched into Fiegel's vrOOM vrOOM Scherzo, an arrangement of William's Scherzo for Motorcycle and Orchestra that scores Henry Jones Jr. and Senior's escape from the Nazis. One of the best bits of Indiana Jones music, this piece catches every bump and jostle of the scene with the Last Crusade's Nazi Theme underscoring throughout.

But the most impressive achievement of the evening, and the closing number, was Eine Kleine Tubamusik für Roadrunner und Coyote, a very faithful conversion of Carl Stalling and Milt Franklyn's score for the Roadrunner Cartoon Zoom and Bored. The scoring of a Roadrunner cartoon is so distinctive, from the alternating fury and depression of Wile E. Coyote's efforts, to the signature xylophone blinks of confusion, that despite the unusual instrumentation, the score fit right in, from the Beyooooop to the That's All Folks. But you don't have to take my word for it, here's a video of a performance of the arrangement from a previous Celluloid Tubas show at Umich in 2005:

It was a delightful evening of film, commentary, rich tones, and lots of spit. UMETE is one of the most impressive ensembles on campus, and with arrangers like Todd Feigel pushing their boundaries, it's worth taking the time to see what Tubas and Euphoniums can do, without a full band holding them back.

Eli Neiburger is Deputy Director of the Ann Arbor District Library and was one of the worst Sousaphone players in the Michigan Marching Band.

You can stay on top of what the University of Michigan Tuba & Euphonium Studio is up to on their facebook page .