Of course, the annual music festival and fundraiser for 826michigan always feels like something of a reunion in the first place. Year after year, it’s become the biggest annual gathering of Ann Arbor and Ypsilanti bands (Ypsi’s wild and woolly Totally Awesome Fest is also a local band extravaganza, but the underground nature of that house-show-based event makes it smaller by necessity). This year’s Mittenfest featured 35 local bands before it wrapped up on January 2. Attendees of the original Mittenfest may have been a significant minority in Tuesday’s audience, but not onstage: opening night for Mittenfest X exclusively featured artists who also played Mittenfest’s inaugural one-day event in 2006.

And in so doing, it was difficult not to observe just how far some of them have come in the intervening near-decade. Thomas, a longtime Ypsi and Ann Arbor resident who recently moved to Montreal, called attention to that evolution most blatantly by repeating the exact same set he performed at the original Mittenfest. Thomas’ music has become both musically and lyrically more complex since 2006, as is clearly evident on his excellent recent release “All Are Saved,” but he took the stage alone with a single acoustic guitar. Although Thomas has certainly improved with age, the old stuff still worked and many in the audience sang along fervently. 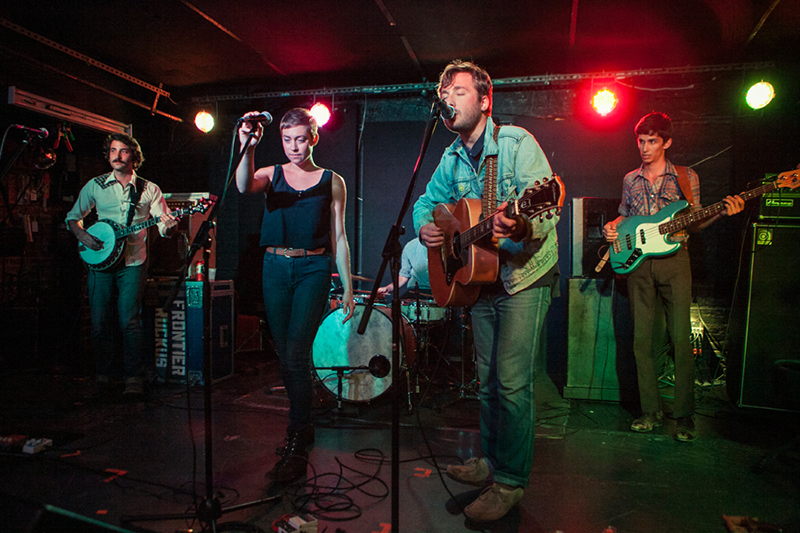 Several of the bands who returned to perform Tuesday night have grown their ranks–and their fanbases–considerably since the original Mittenfest. Ypsilanti folksinger Misty Lyn Bergeron, who played the original event simply as “Misty Lyn” with three accompanying musicians, appeared with her four-piece band The Big Beautiful. A 2006 826michigan blog post about the first Mittenfest noted that the “up-and-coming” Detroit “bluegrass” trio Frontier Ruckus “blew everyone away”; that group returned to Mittenfest X as a nationally recognized quartet whose sound has expanded far beyond basic bluegrass. Ypsilanti songwriter Matt Jones has made perhaps the most dramatic transformation since his first Mittenfest, when he performed with just violinist Carol Gray and cellist Colette Alexander. Gray and Alexander are now part of Jones’ seven-piece ensemble, The Reconstruction, which performed tunes from their lushly orchestrated, critically acclaimed 2014 album “The Deep Enders.”

If one particular element stood out Tuesday night among all the diverse groups who performed, it was incredibly disciplined musicianship. Ypsi expat Emily Jane Powers found a tight groove with backing musicians Alec Jensen, Eric Brummitt, and Christopher Gilbert, jamming on some lively instrumental breakdowns that required rather nimble work from the entire group. Jones, Gray, and Bergeron’s voices intertwined gorgeously as always in varying configurations with The Reconstruction and The Big Beautiful. And Frontier Ruckus proved just how well their group has jelled since the early days, with David Jones pulling off some particularly graceful banjo solos while Zach Nichols juggled a trumpet, melodica, euphonium, and musical saw.

The evening was not without its hitches. Powers blanked on the words to one of her songs, a Mittenfest banner fell down on Jones while he was drumming with Ypsi band Loose Teeth, and Bergeron was confined to a chair throughout her performance due to her ongoing recovery from a car accident. But personality and professionalism shone through. Powers picked up her tune, Jones grinned while keeping the beat with rope and pennants draped across his wrists, and Bergeron came across as strongly as ever.

Overall, there was a sense of quiet triumph to the night, a sense of modest celebration of how far all of these performers have come since they got Mittenfest started nine years ago. Mittenfest celebrates Michigan-made music–and when you look at the 28 bands performing over four days, the scope and talent of the local scene is remarkable. Of the 19 newcomers among this year’s lineup, it’s intriguing to wonder who might be present for a reunion show at Mittenfest XX–and just how far those groups might have come by that point. If anyone asks that year how many audience members were present for Mittenfest X, this writer will be proud to raise his hand.

Mittenfest X was December 29, 2015 through January 2, 2016 at Bona Sera Café and is an annual music festival that serves as a fundraiser for 826michigan.