Review: The Triplets of Belleville LIVE: A Real Treat! 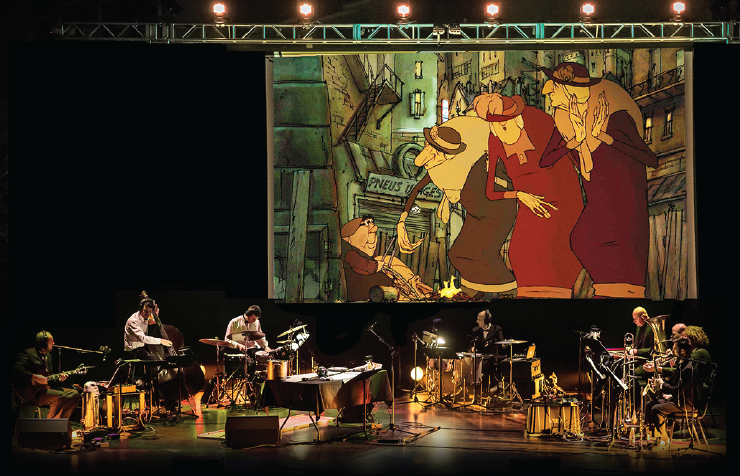 The University Musical Society presented an amazing live performance of The Triplets of Belleville to a sold out crowd at the Michigan Theater on Friday night. The theater screened the movie while a live band played the soundtrack onstage. UMS announced this program on social media in February 2015, so I had a full year to look forward to it. Even with that anticipation, all my expectations were exceeded.

I was accompanied by my wife, my best friend, and my 88-year-old Grandma, who particularly loves The Triplets of Belleville. When the movie first came out, I walked into her house only to have my hearing almost destroyed by the soundtrack blaring from the speakers. She came downstairs with a triumphant grin and asked “Guess what CD I bought at Borders?!” It was not a hard guessing game.

For the uninitiated, Triplets is a 2003 animated film written and directed by Sylvain Chomet about the Tour de France, an aging jazz trio, the wine mafia, and the feud between an overweight dog and a train. In addition to its wonderfully strange story and delightful animation style, the film set itself apart by almost entirely eschewing dialog in its storytelling. The soundtrack, heavily influenced by jazz of the 1920s (but also prominently featuring Bach's Prelude No. 2 in C Minor), featured the Academy Award nominated song "Belleville Rendez-vous".

The first surprise of the live performance (to me; not to folks to read the event description more clearly) was that the conductor was Benoît Charest, who actually composed the soundtrack. It was amazing to see the person who had written the music that I love so much, and watching him conduct was a joy. In addition to conducting, he sang, played the guitar (and vacuum!), and danced along to the music. Charest also provided the French commentary for the Tour de France scenes.

The eight piece band, Le Terrible Orchestre de Belleville, was excellent and played in sync to the movie, occasionally looking up to the screen to make sure their timing was precise. At a few points during the show, the musicians got up and moved around to the center of the stage in order to play some of the more unusual instruments highlighted in the movie, including a newspaper, a cooking pot, and a vacuum cleaner. My favorite part was when the conductor, along with a few of the other band members, danced on a wooden board while clapping and snapping to create a rhythm section. After they pulled this off, they high-fived each other while the audience cheered.

The live performance of The Triplets of Belleville was an incredibly joyous event. The entire band seemed to enjoy themselves as much as the audience. Perhaps the only thing that could have made the evening better would have been a hound dog trained to act (bark?) out the role of Bruno, the movie’s lovable pooch. Of course, it’s highly likely that I’m the only person in the audience who would have liked this. Everyone I attended the performance with loved it, and the crowd was practically giddy as the theater emptied out. The music amplified the story and made each emotion shown on screen both stronger and sharper. My grandma called the night “a real treat.” I couldn’t have put it better myself.

Evelyn Hollenshead is a Youth Librarian at AADL and is interested in finding a local instructor for vacuum playing lessons.