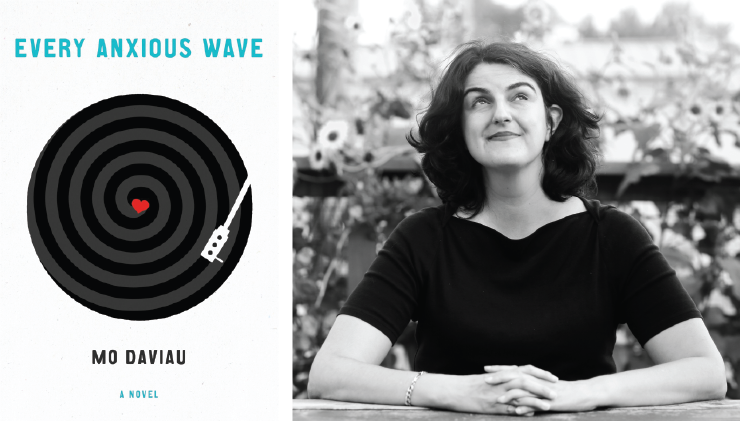 When author Mo Daviau approached the podium at Literati Bookstore to read from her debut novel, Every Anxious Wave on Monday, February 15, she was friendly, enthusiastic, and eager to bring the audience in on the joke.

Her demeanor seemed well-matched to her subject matter - NPR describes her book as "a bittersweet, century-hopping odyssey of love, laced with weird science, music geekery, and heart-wrenching laughs." In it, 40-ish indie music fanatic Karl discovers a wormhole in his closet that enables time travel, and he uses it to send mega-fans back to experience concerts they missed - until a friend gets misplaced in time and Karl must connect with a prickly astrophysicist to untangle the problem.

Daviau started her talk with the confession that she'd recently heard from a reader who took issue with a character's trip to see the Traveling Wilburys perform live in 1990. The reader indignantly pointed out that the Traveling Wilburys never performed live, not in 1990, or ever. Daviau laughingly told the audience she'd come up with an explanation about the character technically crashing a recording session, but she good-naturedly thanked her concerned reader for pointing out her failure to properly research the performance history of the band.

Daviau's fiction debut was released February 9, but before that, it was a work in progress during Daviau's time in the University of Michigan's Helen Zell Writers' Program, where it won a Hopwood Award. The book carries a very sweet dedication to Daviau's father, who was 65 when the author was born, and who passed away when she was a young teenager. This is part of her inspiration for this story: because she had so little time with her father, Daviau says she thinks about time travel every day.

In her Q&A, Daviau said the discovery of a college radio station at age 11 started her on her love affair with indie rock. She came full circle with her early love of college radio by becoming a college radio DJ herself while attending Smith in the 1990s. She explained that main character Karl is some version of herself - but that she "found it easier to project feelings of regret on a schlubby bar owner" than on a woman like herself. But did she nail the male voice? "I just went for it," she admitted. "I'm interested to hear from real men how I fared with this." Reversing the question and answer portion, an obliging dude in the audience shouted, "Sounds authentic to me!" to the amusement of all.

Sara Wedell is a Production Librarian at AADL and might time travel back to see the Monkees Reunion Tour at Pine Knob in 1995, if only to get a t-shirt that's the right size this time.

Like so much of the media in Ann Arbor you guys give the impression that there's only one bookstore in Ann Arbor.