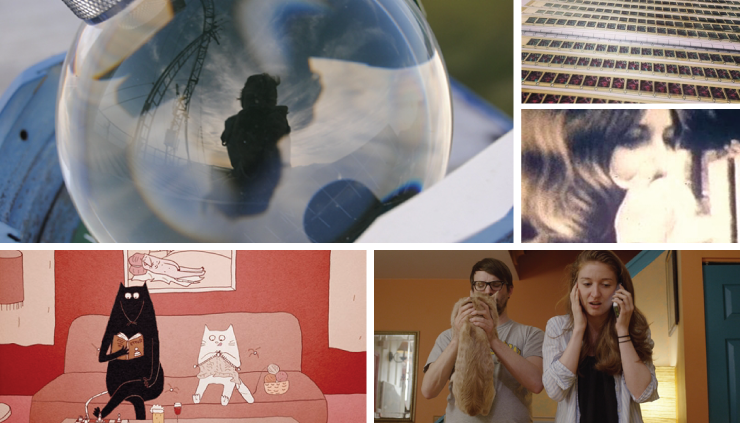 The opening night screening gave attendees a taste of everything they will see at the 54th Ann Arbor Film Festival.

On Tuesday night, the 54th Ann Arbor Film Festival began with an Opening Night Reception and a screening of ten short films from around the world. The reception was a packed and energetic event, completely filling the main lobby of the Michigan Theater with donors, filmmakers, and excited movie-goers. The music was loud, the bites of local food were delicious, and the vast space was packed to the rafters with anticipatory chatter. The total variety of people and apparel gave off the vibe of unadulterated welcome. Some were dressed to the nines in neckties or heels and floor-length dresses, and some were wearing their usual old jeans, sneakers, and plaid shirts, so no matter what, it seemed that this event was made for you.

This was my first experience at AAFF, or a film festival of any sort, and I was a bit apprehensive. Part of my newcomers’ fear was that I’d choose a movie I didn’t enjoy and be stuck with it for the two-hour duration, so it took the pressure off to discover that the Opening Night Screening consisted of a number of short films. The experience was more of a sampler: all the unique flavors of films that you might encounter at AAFF, helpfully squashed into one session.

The films themselves were a mixed bag of narrative, documentary, animated, and experimental, and they ran the emotional gauntlet—from sad and serious, like Hotel 22, a documentary about the homeless taking refuge at night on a 24-hour bus line in San Francisco, to hilarious, like Discontinuity, a film about a couple losing touch with each other and with reality, amongst a sea of disappearing and reappearing cats. 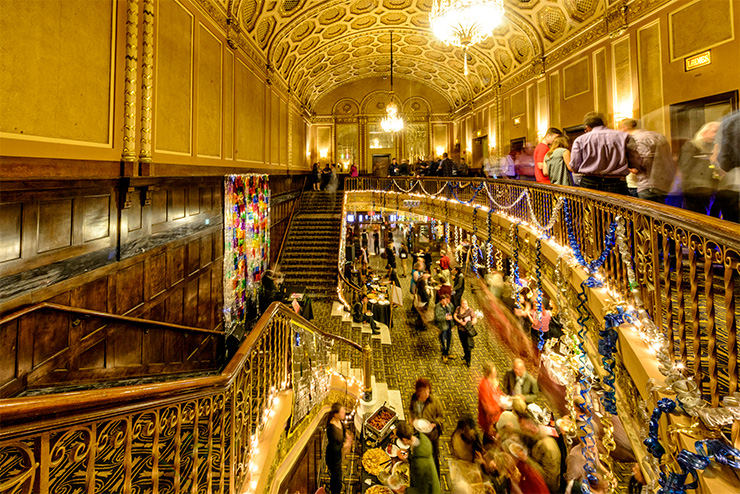 Attendees and lobbies alike were decked out for the Opening Night Reception. / Photo by Doug Coombe

Some films were so experimental that I didn’t even recognize them as films, like REGAL, a fuzzy 2-minute interlude that appeared to be clips of an old pre-movie disclaimer reel interspersed with Internet icons and occasional pauses for buffering. I didn’t realize it was a movie until it was over and my companion clued me in. My first film of the festival and, technically, I missed it.

While some of the films were as avant-garde as I had worried they would be, I found them each to be surprisingly stimulating in their own way. Back Track, a remix of 1950s black-and-white films, had a captivatingly dark, noir vibe. Curt McDowell’s homey A Visit to Indiana effortlessly harnessed the drama and comedy of everyday conversation. Drive In, a close-to-home look at one of the last drive-in theaters in the Detroit area, evoked feelings of sunny summer nostalgia while The Place, a documentary about an isolated weather station, plunged the audience into the cold stillness of a Polish winter. The charmingly untidy animation of Isola del Giglio gave sketch-like impressions of a cozy Sunday morning on an Italian island, while Life with Herman H. Rott told the wordless yet highly comic story of a chain-smoking, drunken rat whose life is tidied up by a neat and proper cat with a love for cleanliness and classical music.

Even when lost among the swirling colors and fuzzy images of an experimental film or staring deep into the impossibly still and dull Polish snowscape, each movie pulled me in and left a genuine impression. I entered the event unsure of what I would find, and when I left, while still unsure what more I would encounter, it was with much more eagerness than apprehension.

Nicole Williams is a Production Librarian at the Ann Arbor District Library and she hates popcorn, so this has been a harrowing experience on many fronts.