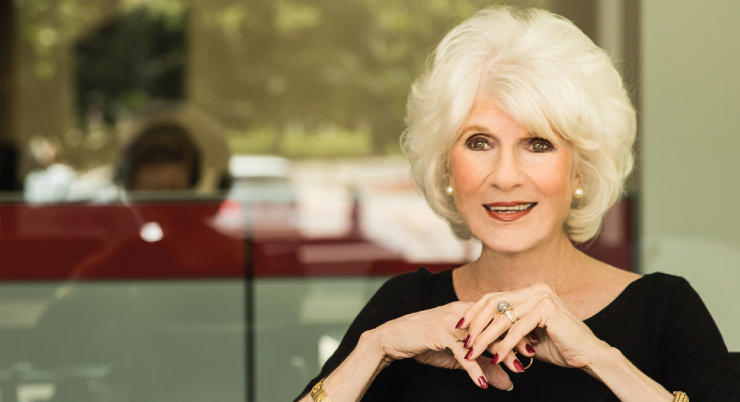 The event, which ran just over 90 minutes, was part of a national tour to promote Rehm’s new memoir, On My Own, which chronicles the end of her husband’s life and his struggle with Parkinson’s; Rehm’s transition to a life without her partner of 54 years; and her ongoing fight to promote “death with dignity,” or patients’ rights to have a say in how and when they arrive at their life’s end.

Thursday’s program began with a discussion about how, after Rehm’s husband John had suffered from Parkinson’s disease for 9 years, he announced that he was ready to die. The doctor in John’s room at an assisted living facility sympathized, but because of legal, moral, and ethical reasons, he couldn’t help.

“After the doctor said that, John said, ‘I feel so betrayed,’” Rehm told the audience. And when the doctor suggested John could determine his own fate by no longer eating, drinking, and taking his medications, John began his 10 day descent toward death.

“Jenny (the Rehms’ physician daughter), on the phone, said, ‘But Dad, we can keep you comfortable,’ and he said, ‘I don’t want comfort. I’m ready to die,’” Rehm recalled, noting that John also, just one day after making his decision, “looked great. He said, ‘I feel better than I have in months.’ And I think it was because he’d taken his life back into his own hands.”

On the final night of this 10-day period, Rehm said she’d been trying to sleep on two chairs that she’d pushed together in John’s room when, at 2 am, she pulled out her iPad and “began writing – what I was thinking and feeling and how awful it was… He couldn’t carry out his death in the way he wanted to.”

When a caregiver arrived, Rehm went home to shower and walk the dog. Though she hadn’t planned to be away long, she soon got a call telling her she needed to return immediately, and when she got back to the facility, John had died 20 minutes earlier.

“I hated not being there to hold his hand,” Rehm said. “I’d held his hand half the night.”

The on-stage conversation’s tone shifted significantly, when Canty asked Rehm to talk about how the couple met. Rehm beamed at the question, saying he looked like a football player, with broad shoulders developed by working on the rock quarry at his father’s farm, and a crew cut.

“I heard John before I saw him,” said Rehm. “He had this huge, booming voice.”

John worked as a foreign trade attorney, while Rehm had a secretarial job at the State Department. Rehm hadn’t attended college, and because the people around her were so educated, she strove to learn more on her own, and had gathered a stack of books – Maugham’s Of Human Bondage, Dostoyevsky’s The Brothers Karamazov, etc. – on her desk. The collection of classics intrigued John, who asked her about them, and soon they made a bet on the World Series (Rehm won) and made a dinner date.

The rest, as they say, is history. And while Rehm told stories of cooking together and dinner party crises, she also took pains to be candid about the struggles in her marriage, emphasizing the idea that no marriage is perfect.

“John was raised by himself,” said Rehm. “For John to share his life with one other person was very hard.”

Rehm spoke of John’s intense need for solitude (while she was gregarious), and the way he would sometimes not speak to her for weeks at a time. Even so, Rehm maintained they generally had a good marriage. She said that now, each morning, when she starts work and records promos for her show, “I look through the glass behind me…and I look up at the sky and I talk to John. That’s part of my grief. That’s part of my connection to him. And I swear he talks back.”

When Canty asked Rehm to define grief, the radio host confessed that she didn’t believe in closure, and said, “Grief is taking the pillow from the left side of the bed and, after 54 years, moving it to the center.”

Rehm also talked about her plan – made before her husband’s death – to retire this fall (“the younger generation needs to hear younger voices,” she said), but told the crowd, “You and I have had such a long relationship that it’s hard to leave.”

The point Rehm returned to again and again, though, is the need for everyone to have a candid conversation with those closest to them about what they want, regarding treatment, when confronted by death.

“It’s something we need to plan for as carefully as we plan and save for college,” said Rehm, who also later noted, during the Q&A, “Medical students are taught the importance of keeping patients alive. You try the next treatment, you try another therapy. But too often, what they’re not taught to do is listen to what the patient wants… We here in this country are death-averse. We shy away from it. But our population is aging. We’ve got to confront the reality that death is as inevitable as birth.”

Rehm also noted that she didn’t believe that death was an end. “It was raining outside once, and John said, ‘I wonder if there’s rain in Heaven. Maybe the drops will be bigger,’” Rehm recalled. “I thought that was wonderful. He was looking ahead.”

The Q&A portion of the night began with a fan asking Rehm to imagine being on stage with Donald Trump instead of Canty. “I don’t think I would be here,” quipped Rehm.

In the end, not every fan who lined up behind two microphones got to ask a question – if they did, the event might still be going – but after Rehm finished her final response by saying, “By the way, I love you, too,” the night ended as it began: with a thunderous standing ovation.