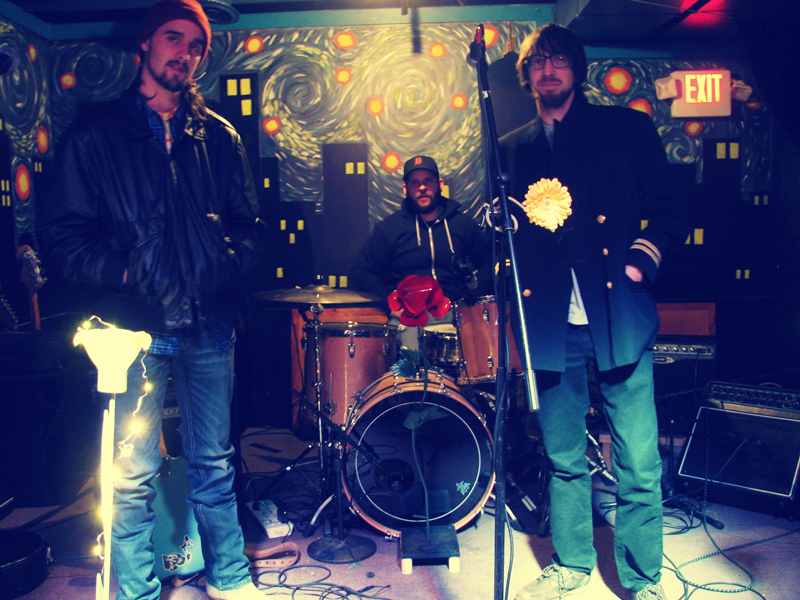 I had an opportunity to sit down with Once United before they jumped on stage to perform a dynamic array of indie rock songs written mostly by lead vocalist and guitarist Patrick Beger. The core of the trio seemed to be the distinct musical identity of each member. “I just want to play the songs I write with good people," Patrick says. "Being friends first, and not being the exact same type of musician makes us who we are as a band.”

A Michigan native, Patrick taught himself guitar, piano, and drums while growing up on Torch Lake. He joined a friend’s classic rock cover-band, The Breakers, and played shows all over northern Michigan. The experience cemented Patrick’s love for songwriting and performance, encouraging him to move to Chicago to pursue music. In 2013, Patrick came to Ann Arbor to study communications at the University of Michigan and founded Once United.

Patrick started rehearsing with drummer Josh Weichman, a sound engineer for Solid Sound Recording Company, the iconic Ann Arbor studio tucked away in the woods with clients ranging from Beck to The Detroit News. Josh’s keen technical sensibility and resonance on the drums adds a punchiness to Once United’s sound, especially in the song “Trust Me”. While his past musical projects were mostly punk or hard rock, Patrick’s songs caught Josh’s ear. “This is not the typical type of band that I would have joined, but I'm happy that I did," Josh says. "The songs were really catchy. And fun to play too.”

As luck would have it, Patrick found a room in an apartment with Ryan King, Once United’s versatile bass player whose love for psychedelic and prog rock comes through in particular on songs like “Killin’ Time” and “Cracks of New York City”. Along with his uncanny ability on the bass, Ryan is an accomplished clarinetist and founder of several Ann Arbor area bands, including local jam prog band Stormy Chromer.

Ryan: “As a musician, you are a conduit for some feeling or emotion, or spirit, that needs to go through you, or through your fingers when you play, so it's not like we're responsible for the emotion that comes through. It just has to do with our hearts, and our ability to put sound through our appendages and through love.”
Patrick: “What he is kinda describing is the subconscious, which I think is true with a lot of musicians. It's your subconscious coming out, and for some reason you have to express it. I don't know why exactly.”
Ryan: “It's like your spin on the greater collective conscious. It’s like you are a certain tint or shade of glasses, and there's this man behind you looking through it, and what you see is the music.”

This interest in turning the stories running through our lives into song and experimenting with sound is apparent on “The Looper Song,” where electric guitar riffs are mixed live, or “Came to Get Greedy,” an edgier piece. Once United’s captivating hour and a half set proved their range as musicians and treated the audience to authentic songs that capture a simultaneous longing for intimacy and escape -- or, as Ryan put it, “just a healthy dose of human spirit.”

Juliana Roth is a writer currently living in Ann Arbor whose poetry, essays and fiction have appeared in The Establishment, Irish Pages, Bear River Review, DIN Magazine, and other publications. An original film she wrote will be released in 2017.

Once United’s refreshing sound can be heard online at onceunited.bandcamp.com or live at Ann Arbor Brewing Company on June 6th and Chelsea Sounds & Sights Festival on August 4th. Keep up with them on Facebook as they add more shows for the summer.