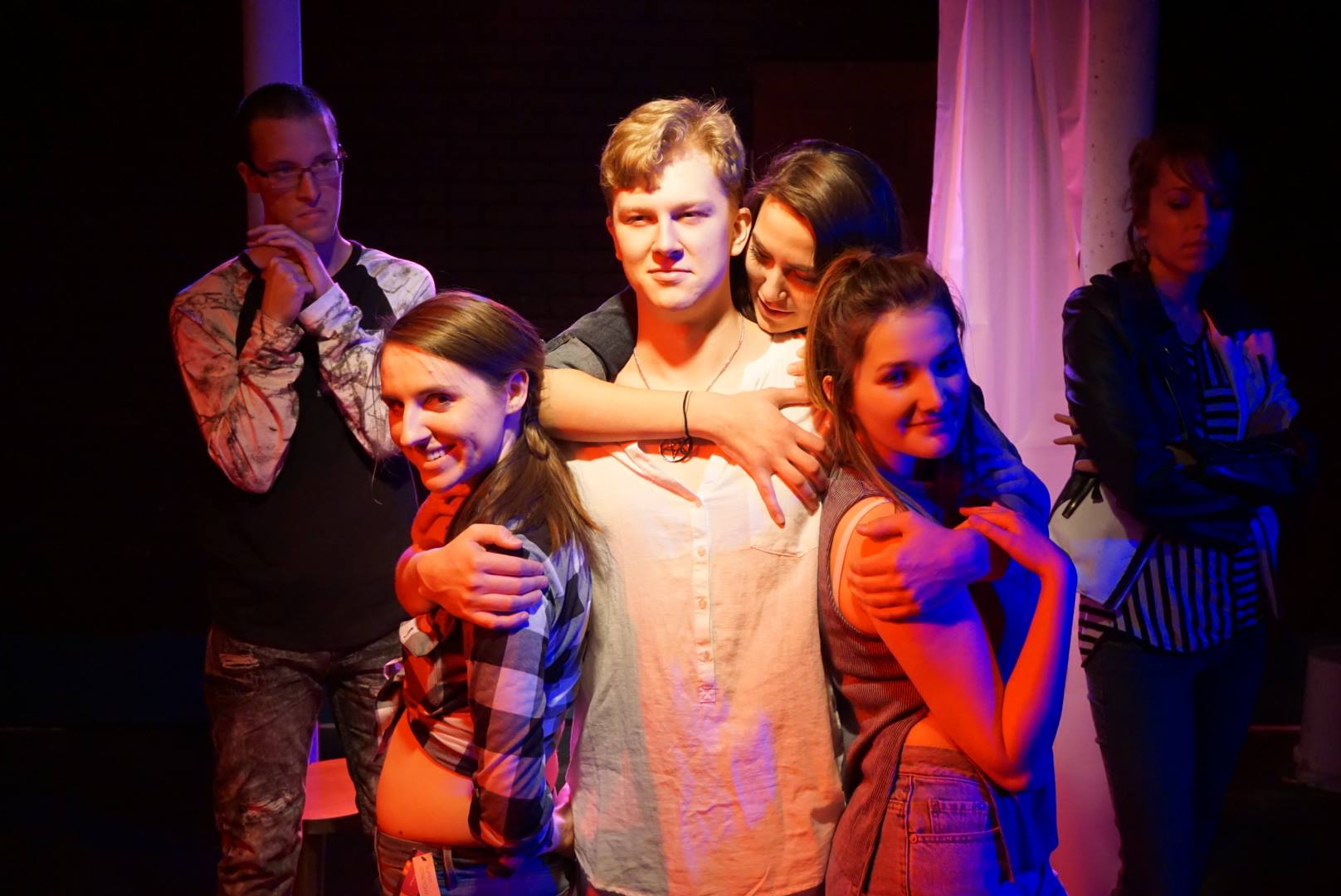 You don’t get much quirkier than the concept for Theatre Nova’s new production Irrational, a rock musical about ancient Greek mathematicians. The show by Ann Arborites David Wells and R. MacKenzie Lewis follows the con man Hippasus (Sebastian Gerstner) as he attempts to ingratiate himself with the powerful cult leader Pythagoras (Elliot Styles). But Hippasus’ plan to use his newfound social stature to win the beautiful Eloris’ (Tara Tomcsik) hand in marriage–and more importantly, her wealth–goes pear-shaped when Hippasus inadvertently introduces the concept of irrational numbers into Pythagoras’ ratio-obsessed sect.

It’s a rather bizarre story at face value, even more so given that it’s at least somewhat based in historical record. Pythagoras, namesake of the famous theorem, did in fact lead a movement known as Pythagoreanism, and legend has it that he also had a man named Hippasus put to death for introducing the concept of irrational numbers. Wells takes this odd bit of mathematical lore and thoroughly has his way with it, adding a number of third-act twists and fleshing out a love triangle between Hippasus, Eloris, and the forthright Pythagorean Theodusa (Emily Brett).

The strongest moments in this unusual riff on ancient history are consistently those involving Styles’ Pythagoras. Styles, only two years into his musical theater studies at the University of Michigan, is the play’s comic center of gravity. Clad in white plastic-framed glasses and a flowing white tunic and pants, Styles fully grasps the humor inherent in his nerd rockstar character and plays it for all it's worth. He has the grace to pull off a few surprising physical stunts, the presence to fully project Pythagoras’ bluster, and vocal chops that even extend to pulling off a well-placed rap in Pythagoras’ self-aggrandizing showstopper “Mononymous.” The character is over-the-top, of course, but with Styles in the role you won’t doubt Pythagoras’ power for a second.

Styles is helped along by a generally well-used Greek chorus, an entertainingly sassy trio of gamblers played by Anna Marck, Esther Jentzen and Emily Manuell. The three harmonize beautifully and frequently pump up the humor of Pythagoras’ numbers with fawning girl-group backup vocals and a smattering of hip-hop dance moves. Wells overuses the trio for exposition, however, as the chorus repeatedly re-explains plot developments made perfectly clear in song moments before.

Tomcsik is a sly supporting player, punching up several laugh lines that are good on paper but surprisingly hilarious thanks to her delivery. Brett puts considerable physical energy into her performance, if not quite the inner confidence that her character is written with, and Matthew Pecek is amusingly game as a disenfranchised Pythagorean. Gerstner, however, doesn't quite match the personality and comic energy summoned by Styles, Tomcsik and other costars. Hippasus ought to be at least Pythagoras’ equal in charisma, but the character never quite pops.

That probably has something to do with the fact that Wells and Lewis seem to inject the lion’s share of their creative energy into pretty much everything except Hippasus. We never quite get a sense of our leading man from square one, and his crucial relationship with Eloris is established in a single musical number that isn’t enough to sell us on her connection to him.

Lewis’ score may be at its best when Pythagoras and the chorus are involved, but it’s consistently strong throughout the play. Lewis’ songs are excellent, mostly traditional show-tune stuff with bits and pieces of funk, R&B, and rock thrown in to lively effect. His work here is sometimes quite complex, with some of the group numbers featuring accomplished use of counterpoint and harmony. The tunes are thoroughly catchy and you’re likely to walk out of the show with at least one of them stuck in your head.

Perhaps the most ambitious task Irrational sets itself is pulling off a full-fledged musical in Theatre Nova’s extremely intimate stomping grounds at the Yellow Barn. Director Carla Milarch makes the best possible use of the theater’s small thrust stage, successfully blocking the actors to play to audience members on all three sides of the sparse set and choreographing to the greatest extent that the space allows. But there’s simply no room for a live band in this setting, which is something of a shame given how good Lewis’ score is. On opening night the prerecorded score seemed surprisingly quiet; the coming performances of the show would be served well by cranking up the volume and letting the music soar a little more.

Irrational is far from a perfect production, but it certainly doesn’t lack for creativity, originality, or enthusiasm. Wells and Lewis deserve major props for conceiving such a singular idea, and Milarch deserves the same for her efforts to bring it to life in this challenging space. The Irrational team did two years of workshopping to get the show to this point, and it’s easy to see something truly great emerging with a bit more refinement.

We’re fortunate to have creative minds in town coming up with big, crazy, fun ideas like Irrational, and even more fortunate to have an outfit like Theatre Nova that’s willing to realize those ideas onstage with professional craft. Although it has its flaws, Irrational is a lot of fun and it deserves the attendance to prompt the additional development that a second (or third or fourth) staging might bring. Where else are you going to see a rock musical about ancient Greek mathematicians?

Patrick Dunn is an Ann Arbor-based freelance writer whose work appears regularly in the Detroit News, the Ann Arbor Observer, and other local publications. Like Pythagoras (or Prince), he intends to one day be known by just one name.

Irrational runs April 22 through May 15 at the Yellow Barn, 415 W Huron St. Tickets are $20 and showtimes are 8 pm Thursday, Friday, and Saturday; and 2 pm Sundays.