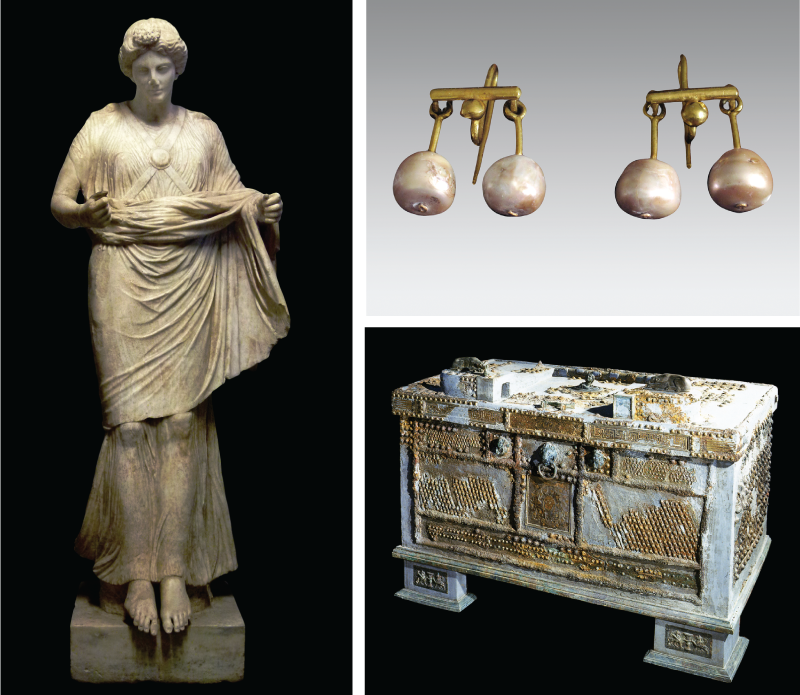 The University of Michigan Kelsey Museum of Anthropology’s Leisure & Luxury in the Age of Nero: The Villas of Oplontis near Pompeii has everything going for it that a supremely superior museology project can have going for it. It’s a remarkable detective story thousands of years in the making, complete with bona fide top-notch investigators. And, not the least, it is a visual feast for the gallery browser who is willing to take the time to investigate the proceedings at hand.

As Kelsey Curator Elaine K. Gazda tells us, the exhibit “explores the lavish lifestyle and economic interests of ancient Rome’s wealthiest citizens from the time of Julius Caesar (around 50 BC) to the eruption of Mount Vesuvius AD 79. On view are spectacular marble sculptures and wall paintings from an enormous luxury villa that may once have belonged to the Roman empress Poppaea, second wife of Nero."

“In contrast,” continues Gazda, “objects from a nearby commercial complex show how wine is bottled and traded. It was also here that 54 people died during the eruption, several of them carrying gold jewelry and coins. Disparities of wealth and social class evident in these two establishments raise questions about the life of leisure and luxury in ancient Pompeii—questions that were as vital in antiquity as they are today.”

This succinct synopsis pretty much covers the territory of the exhibition, but it’s the hard-earned work on display that makes this such an exceptional museological project. These artifacts give the exhibit a previously uncirculated authenticity that’s quite exciting—as well as illuminating of this ancient period of history.

As anyone who has visited the ruins of this area with the still-smoldering Vesuvius in the background can tell you, the distances depicted in Leisure & Luxury are far shorter geographically than the imagination might lead us to believe. Situated in the hills off the Bay of Naples, the city of Pompeii took the brunt of the two events on August 24-25, 79 AD—a first day of gas and volcanic ash extending high into the stratosphere that produced a pumice rain southward of the cone that built up to depths of nine feet, followed by another day of gas and hot rock that buried the city in two flows and engulfed the bay of Naples. But equally devastated were the coastal cities of Herculaneum (to the northwest across the bay) and Oplontis (situated three miles away slightly northwest on the coastline).

And this is where the detective story begins in earnest. The excavation of some public baths in 1834 identified the long lost city of Oplontis as a middle-sized town with wealthy villas and a well-developed residential community. But it took systematic excavations between 1964 and 1984 to unearth several important villas, most notably “Villa B,” a house that is now known as the Villa of Lucius Crassius Tertius, where more than 50 bodies were found. Inside, excavators found piles of jars that indicated the villa was a business center where wine, oil, and other agricultural products were manufactured, processed, and sold.

Yet as archeologically important as this "Villa B” has proven to be, the arguably more sensational excavation is the now-called “Villa A” of Poppaea Sabina, named after emperor Nero’s second wife, which was situated on the coastline between Naples and Sorrento. This luxurious villa, buried under 28 feet of pumiced ash, was first discovered during the construction of the 18th century Sarno Canal at the modern city of Torre Annunziata, when plundering mid-19th century French excavators removed several paintings from the villa and uncovered its lavish peristyle garden.

Flash forward to the late-20th century through the present and one encounters the work of University of Texas Art Historian John R. Clarke, who with colleagues founded the Oplontis Project. Housed in that university’s Department of Art and Art History, the project was founded with private funds, University of Texas Funds, and the National Endowment for the Humanities through special permission by the Italian Ministry of Culture with the cooperation of the Archaeological Superintendency of Pompeii. The current result is a handsome recounting of this history, edited by the U-M’s Gazda and Clarke and now on view at the Kelsey Museum.

And what riches are on display: architectural components such as a mid-First century Corinthian capital with a ring of eight acanthus leaves at the bottom, lately excavated in a storage place that decorated (or was meant to decorate) a wing of "Villa A" that was undergoing renovation at the time of Vesuvius’ blast. Likewise, there are wide ranges of painting fragments uncovered from the now-called Atrium Five, with reconstruction renderings that indicate where these frescos would have been situated at the original site. Of commercial importance are first-century silver spoons, earrings, bracelets, a gold necklace, double pearl-pendant earrings, and a variety of recently minted first-century coins.

Yet of all these treasures, among the most poignant is a delicately rendered, re-pieced-from-fragments, first-century BC, white marble “Aphrodite/Venus,” whose left foot is raised above a diminutive standing Eros, and whose left hand holds an apple resting on a smaller female statue. Oddly enough, a slight disfiguration of this Aphrodite’s nose completes her rescue from oblivion.

We cannot know for certain if this is a depiction of the goddess. As Gazda writes, “It is not clear who is represented in the sculptural support, and there are no parallels that might identify her.” As such, the statue may be a play in time as well as in meaning, a folding of fate from within both idolatry and mythology through the conceit of all-too-familiar vanity—as unexpectedly undone by nature.

But that was then—and this is now. As Leisure & Luxury whole-heartedly shows us, there’s so much more we can—and must—learn from what little past we have. We’ve literally just scraped the surface. As “Aphrodite/Venus” might tell us if she could speak, there’s a fantastic world beneath our contemporary world awaiting excavation. And this is the exhibit’s most enduring legacy.

University of Michigan Kelsey Museum of Anthropology: “Leisure & Luxury in the Age of Nero: The Villas of Oplontis near Pompeii” will run through May 15, 2016. The U-M Kelsey Museum Meader Gallery, Second Floor of the Upjohn Exhibit Wing is located at 434 S. State Street. The Kelsey Museum is open Tuesday-Friday 9 a.m.–4 p.m.; Saturday and Sunday 1–4 p.m. For information, call 734-764-9304.