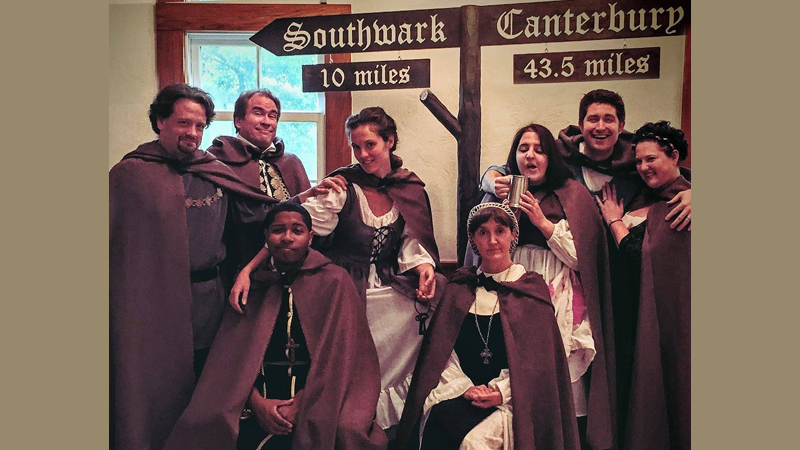 From every shires ende, Of Engelond, to Caunterbury they wende.

We’re all pilgrims, in a sense, finding our way around the hairpin twists and bumps in our life’s path. Maybe this is why Geoffrey Chaucer’s 14th century writings about a group of pilgrims traveling to Sir Thomas Becket’s shrine still endure.

Or it could just be because The Canterbury Tales – adapted for the stage by Lindsay Price, and now being staged (outdoors) by Ann Arbor’s Penny Seats Theatre Company – are often laugh-out-loud funny, and demonstrate that hundreds of years ago, people had many of the same desires and fears that we have have now.

One basic human drive was, and remains, storytelling, which Chaucer’s pilgrims employ as a means of distracting themselves during the journey. For Price’s stage version of Canterbury, the pilgrims have been distilled down from about thirty, in the original Middle English text, to seven: the Pardoner (Brian Baylor), the Miller (Matt Cameron), the Franklin (Dale Dobson), the Cook (Jenna Hinton), the Prioress (Tina Paraventi), the Wife of Bath (Debbie Secord), and the Reeve (Jeff Stringer) – plus an inn’s hostess (Jennifer Sulkowski), who tags along and suggests that the pilgrims compete in a storytelling contest.

I’ll pause a moment here while you Google the definition for “Reeve” and “Franklin,” as I needed to do.

Director Anne Levy stages the production on the walkway in front of the West Park band shell, so patrons sit on blankets or lawn chairs in a tiered, grassy space. (Many brought a picnic dinner, and some snacks and drinks are available for purchase; sunglasses, a hat, and sunscreen are recommended, since the sun can be pretty intense for the show’s first hour.)

Using little more than costume props and small, stackable wooden benches – in a way, Penny Seats’ Canterbury hearkens back to theater at its simplest and most pure – the spirited troupe re-enacts six of Chaucer’s most memorable tales, employing music and small bursts of audience interaction/improv for set changes. And while a couple of the stories feature bawdy sexual situations and crude acts, Price’s adaptation, paired with Levy’s direction, suggest instead of show. (It also makes some textual adjustments, so that the Nun’s Priest’s tale of a rooster and a fox is told instead by the priggish Prioress.)

Levy’s ensemble works together beautifully, occasionally working in contemporary references for fun. (Following the line, “The truth is out there,” there’s a mumbled reference to Agent Scully.) And Price’s choice to have the pilgrims re-enact the tales results in many opportunities for the players to shift accents and personas. Some don’t make sense – a New Yorker? – but they’re not supposed to. The shifts underline the fact that this is all just a bit of silly fun.

Hinton earns big laughs as the self-doubting cook who’s too cowed to tell a story; Secord plays an appropriately bold, unapologetically straight-shooting Wife of Bath (and an even funnier hen); and Stringer, as the touchy Reeve, anchors the production, stepping into many roles with no-holds-barred zest.

With a running time of just over two hours, with one intermission, Canterbury doesn’t exactly feel fleet, despite the cast’s best energy and efforts, so it’s ultimately more pleasant than thrilling. But given the relaxed vibe of the venue, and the quality of the production, there’s no reason why Penny Seats Theater – alongside Shakespeare in the Arb – shouldn’t become yet another beloved outdoor theater tradition in Ann Arbor.

Dying to see this! Back in

Dying to see this! Back in the day, we did this as part of the Ann Arbor Medieval Festival, which took place each year up on the School of Music's campus.