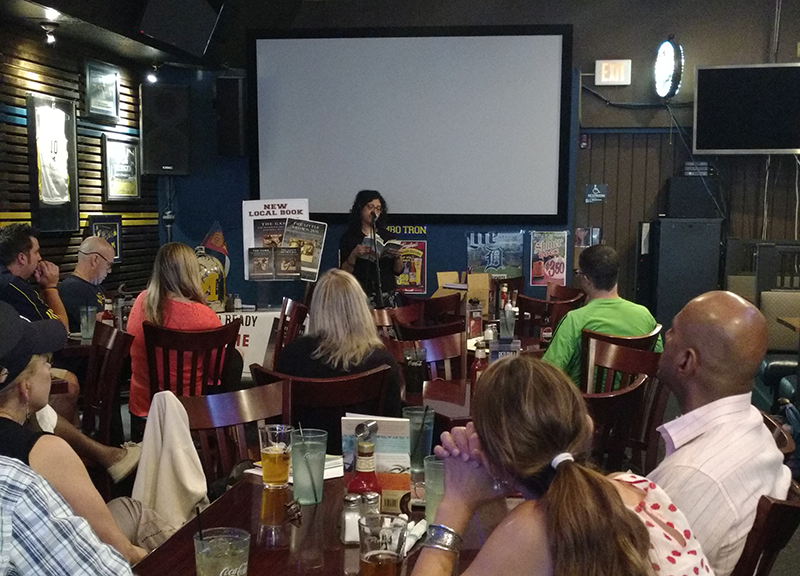 Zilka Joseph reading her poetry at the Arena during Ann Arbor Book Festival.

Poetry is a democratic form of art; perhaps one of the most accessible genres of writing as it’s meant not only to be read, but heard and performed. The echoes of poetic language are all around us from the piece of a song you catch as you walk by an open cafe door to the movement of a conversation between strangers. Despite poetry’s underlying prevalence in our lives, one of the least expected venues for poetry may just be a sports bar.

Still, on Saturday, June 18th, The Arena in downtown Ann Arbor opened its doors to the Ann Arbor Book Festival Book Crawl and three local writers, including poet Zilka Joseph. A long-time Ann Arbor resident, Zilka has been nominated twice for a Pushcart prize and her poems have appeared in many publications from Poetry (forthcoming–look for it later this year) to the Kenyon Review Online. Her work was honored through several awards including a Hopwood, the Elsie Choy Lee Scholarship from the Center for Education of Women, and a Zell Fellowship from the University of Michigan. Against the backdrop of Michigan football memorabilia and muted ESPN highlight reels, Zilka read from her recent collection, Sharp Blue Search of Flame. 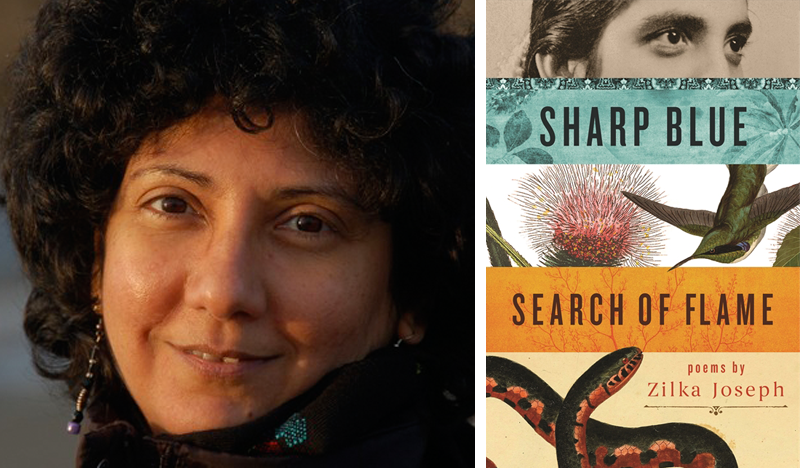 This collection is remarkable with its breadth and enchanting language, encapsulating the boundaries--artificial and real--of life in India and the United States. All the while, Zilka’s poems search for something larger, something beyond us and all around us. This may be spiritual or it may be the commonality of human experience. From guiding the reader/listener on an internal journey to mapping identity in a complex world, Zilka brings the cyclical nature of life and self-discovery to the forefront of her work.

This sentiment of self-reformation resonates in poems like Birds in a Blizzard where Zilka writes “your ancestors are wanderers,” or in Child of Churning Water where she asks “Who shall I be now? Where can I perch?” Zilka’s interest in rebirth extends outward to broader stories of mythology, cycles, and origin. With Apples and Oranges, the Adam and Eve story is reframed to challenge the common narrative of this tale.

In between her poems, Zilka offered insight into her creative process and the emotional source of her writing. “I feel as though I’ve lived many lives,” she told the audience. “We always find ways to reinvent ourselves even from our darkest moments.” The multitudes of Zilka’s lives seem to lend themselves to the deep introspection present on the page.

As she went on to read What Burns (Who Will Remember), a poem about the rape and murder of Jyoti Singh, a young woman in India whose death sparked international protest, the tone of the room changed to one of solace. A police officer in the audience was moved by this piece and pledged to read more about the story so as to better serve the community he works in, demonstrating the social value of reading poetry in public.

Art is ultimately a celebration of the unexpected, observed moments that are truly human and full of life. Hearing such beautiful poems read in an unexpected setting reminded me of the boundaries we often create in our own environments, and the importance of seeking uncommon moments of beauty.

Juliana Roth is a writer currently living in Ann Arbor whose poetry, essays and fiction have appeared in The Establishment, Irish Pages, Bear River Review, DIN Magazine, and other publications.

Visit Zilka Joseph's website for more info on her and her work. The Ann Arbor Book Festival is an annual event. Check their website for next year's dates and additional events.