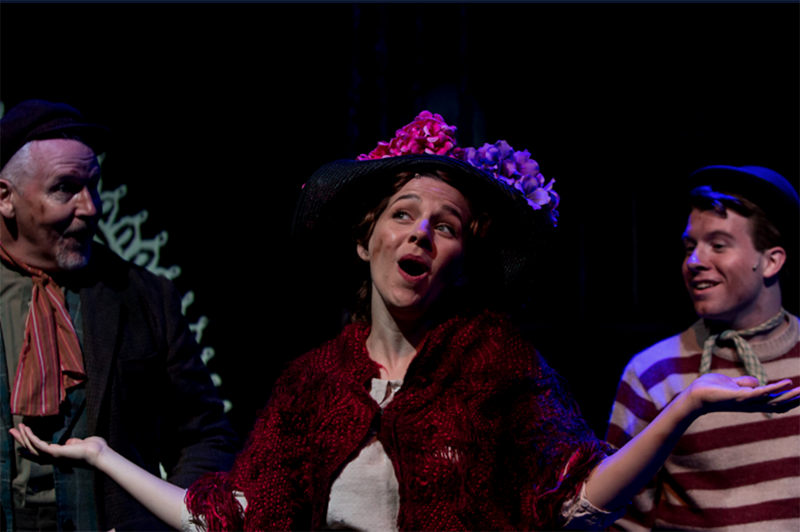 It’s loverly what a fine cast and a clever director and designer can do.

The Encore Musical Theatre Company in Dexter has taken on one of the most challenging and most beloved musical romances and redesigned it for the theater’s intimate confines.

My Fair Lady is celebrating the 60th anniversary of its Broadway debut this year. To mark the occasion Encore has enlisted the talents of noted theatrical director and set designer Tony Walton, who in 1956 was married to the musical’s original Eliza Doolittle, Julie Andrews.

Walton has taken a minimalist approach to a work that has always inspired a certain extravagance. But neither the Encore stage nor budget could accommodate that richness. Walton has been inspired by line drawings for a published script of Bernard Shaw’s Pygmalion, upon which My Fair Lady is based. The drawings by Feliks Topolsky and the original Broadway sets by Oliver Smith were inspiration for rear screen projections that neatly, and compactly, capture the look and feel of the various London locations. The costumes still have a stylized Edwardian charm. The low- and high- class areas are not as starkly defined but are still clearly suggested.

A chamber orchestra visible in the rear stage, a smaller ensemble, and the elimination of the grand ball scene allow Walton and his talented cast to focus on what matter’s most, Shaw’s great characters and wit and Lerner and Loewe’s beautiful music, one of the finest collection of memorable songs in the history of musical theater.

The story is well known. An arrogant upper-class linguist accepts a bet from a fellow language expert to transform a howling lower class flower girl into a “proper lady” by teaching her how to speak like the proper people do. For Shaw this was a play about class differences and the snobbery of those on top. But Alan Jay Lerner’s book transformed it into the unlikely near romance of a beautiful young woman and a grumpy middle-aged confirmed bachelor. Lerner and Frederick Loewe created songs of poignant yearning for position and love and comic songs that capture the spirit of the “undeserving poor.” And it works every time.

The lead performers come with Broadway, film, and television credits that add a bit of glamour, but it’s their talents that really count.

Jessica Grové is an enchanting Eliza, feisty, determined and yet also a bit vulnerable. Grové has a rich, commanding voice that always hits the sweet spot on the show stopping “I Could Have Danced All Night,” but also finds the wistfulness of “Wouldn’t It Be Loverly,” the fierce determination of “Just You Wait,” and the giddy joy of “The Rain In Spain.” The musicals ambiguous ending has always seemed a bit forced, but the sweet, resigned look on Grové’s face makes it a bit more believable.

The object of Eliza’s scorn and growing affection is of course the irascible Henry Higgins, or to the flower girl 'enry 'iggins, a man with a talented ear for accents and no sense at all for the feelings of others, until he’s transformed by his creation. Veteran British actor David Gerroll looks as if he were born to play Higgins. He’s lean, angular with a hawkish, weathered Sherlock Holmes face. He sings in the traditional Rex Harrison speak sing. He bites off Higgins' disdainful opinions of the world with relish and he really comes into his own in his final desperate attempts to keep Eliza without losing himself.

Eliza’s wastrel father with his original ideas on morality, Alfred P. Doolittle, is one of the great comic characters. Keith Allen Kalinowski gives a roaring, rollicking, joyful performance as this always drunk con man. He has two standout musical numbers on “With a Little Bit of Luck” and “Get Me To the Church on Time” and finds every nuance of humor and bits of naughtiness that the songs embody. He is supported by a lively, if confined, ensemble, and particularly by his two rubber faced mates Harry and Jamie, Dan Morrison and Jeff Steinhauer.

The small but important role of Freddy Eynsford-Hill is given a stunning performance by Riley McFarland. Not only does he have a beautiful, piercing tenor voice on “On the Street Where You Live,” but he has a bright, engagingly goofy personality that captures the sweet pain of Freddy’s unrequited love for Eliza.

The musical director Tyler Driskill also finds a way to make a big show work in a small venue. The chamber orchestra does a fine job, and can be particularly expressive in the quieter moments. Sometimes the orchestra is a bit too loud over Higgins’ spoken songs but more often it can’t capture the sweep of a large orchestra on Loewe’s lushly romantic songs. But Driskill and his tiny crew have found a way to provide what’s needed and give full support for the fine singing of the ensemble and the solo performers.

This is solid musical theater, which is what is always expected at Encore. But for the company and for the multi-award winning Walton it has also been an interesting experiment in how to pare down a big, big show and bring out all the intimacy at its core. Walton and Encore have met the challenge.

My Fair Lady runs through August 28. For ticket information, call the Encore Theatre Box Office at (734) 268-6200 or visit the website at http://www.theencoretheatre.org/tickets.