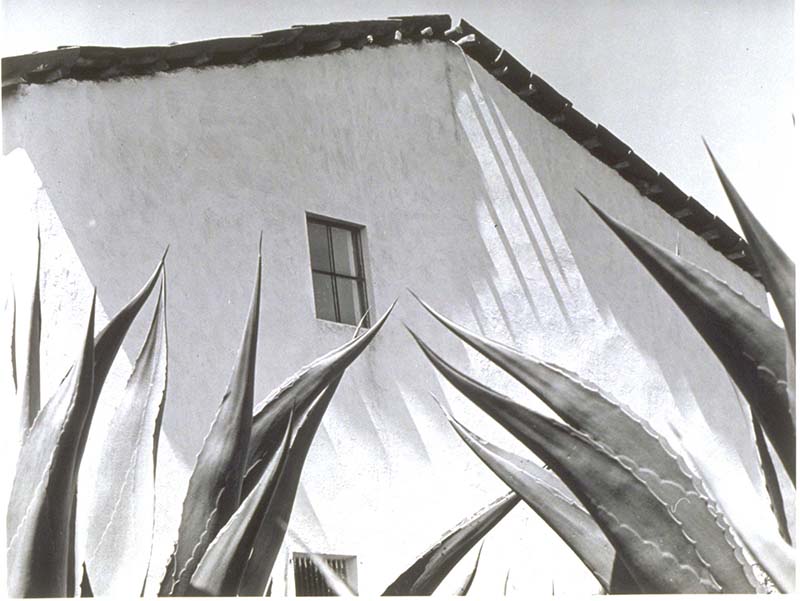 The University of Michigan Museum of Art’s Manuel Álvarez Bravo: Mexico’s Poet of Light is easily going to be one of the most accurate art exhibition titles of 2016. This tidy 23-piece UMMA display shows the world-famed Bravo at his best: For he’s indeed a master of photographic light—as well as a poetic artist.

All photographers are capable of what is sometimes called a “privileged moment.” After all, it would seem simple enough to capture a moment with photography: You just point your camera and click.That's what's been happening photographically for quite nearly this last 150 years ... right?

Well, not quite. After all, you have to know what you're looking for because the most remarkable thing about photography is the camera’s utterly elastic way of recording an image. The world isn't as transparent as might seem apparent on first observation. And it doesn’t take much more than one’s last batch of photos for the confirmation.

Bravo, on the other hand, knew what he wanted to see—but the craft didn’t stop there. For the next rule consists of mechanistically knowing how to get what you want to see. And this is as complicated a task as knowing what one’s looking for.

It’s at this point that poetry arises—and was Bravo ever a masterful poet.

One glance at Manuel Álvarez Bravo: Mexico’s Poet of Light and it's obvious Bravo knew what he was looking for. Each Bravo artwork in this magnificent exhibit is an extraordinarily well thought-out composition where every visual element is accounted for; these physical elements being weighted against the tone of light, the density of light, the direction of light, the volume of light—and then there’s the poetry.

What’s left in the image is the world unto itself.

Granted, the time in which Bravo was working is romantic. Mid-20th century Mexico was a world where the natural and the supernatural seemingly melded together in a heady exotic brew and where the sacred and the profane coexist comfortably. There’s seemingly no separation between what is well and what is well-enough.

Born into an artistic Mexican family, Bravo was forced to terminate his education at the age of 12 when his father died in 1914. Studying accounting as he worked for the Mexican Treasury Department, Bravo freelanced photojournalism while learning the basics of art photography. It was through the friendship of fashion model and political activist Tina Modotti that he made contact with American photographer Edward Weston who in turn encouraged him to polish his craft.

Having lived through the Mexican Revolution of 1910-1920, Bravo was inclined to view his art through the prism of natural supernatural romanticism (and later surrealism) that marks early 20th-century Mexican aesthetics. As can be seen in the photographs of this exhibit, Bravo wrestled with the stereotypes that stamp much Mexican artistry while often using echoes of this stylization to comment upon them. Bravo's camera consistently catches these contradictions with a fluid grace that never editorializes while knowingly commenting on what’s depicted.

For example, Bravo’s 1977 gelatin silver print Señor de Papantla (“The Man of Papantla”) is a decidedly clever photograph whose background and meaning are richer than apparent in the already rich photograph of a Mexican campesino dressed in his best peasant garb. For the locale of the painting is as important as the image in that Papantla (in the state of Vera Cruz; in the Sierra Papanteca range, near the Gulf of Mexico) is famed as one of Mexico’s “pueblo mágico”—a city of particular natural beauty with historic and cultural relevance. 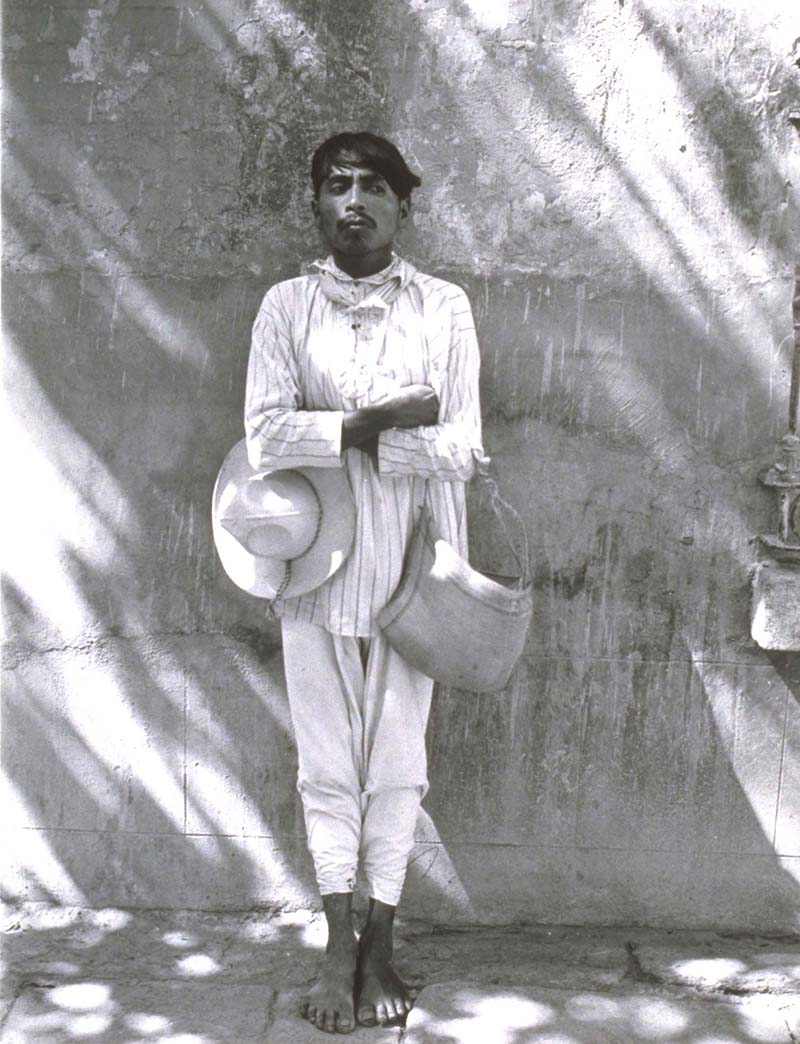 Bravo’s Señor stands stiffly with his sombrero tucked under his right arm posed in front of a nondescript stone wall. Standing under the diagonal right shade of a tree with his hair parted in the same direction to create an internal symmetry, of equal importance is his eyes cast away to the left in the same way. Averting the photographer’s gaze, Bravo’s Señor reflects the subdued unwillingness to cooperate that’s often characterized the citizenry of a country that’s seen centuries of repetitive political, social, and cultural upheaval.

By contrast, famed Mexican artist Frida Kahlo adopts an opposite stance for Bravo’s camera in her 1938 Frida with Globe, Coyoacan, Mexico gelatin silver print. Where the campesino was not directly addressing the camera, Kahlo challenges the camera by looking directly at Bravo. This act, of course, is in direct contrast to the Mexican sense of social propriety where the expectation would decidedly be a repressed feminine averral.

Even in the late 1930s, Kahlo (and by extension, Bravo) were having none of this modesty. Sheer appropriateness is drawn from her forthright respectability, as though the appropriateness of one’s behavior is as much one of correctness as it is self-respect. Seated with her left elbow propping her left hand against her cheek, Kahlo is everything she intends to be.

But Bravo is also addressing his audience in that a single subtle compositional element twitches the history of art anachronistically. For in contrast to Diego Velázquez’s 1656 painting Las Meninas (where Velázquez paints himself painting the painting), Bravo eliminates himself from his photograph because there is no photographer reflected in the globe on the table next to Kahlo’s left. Surrealism was, of course, in full force in Europe at this time and Bravo opts to magically disappear in his own artwork.

If, however, one wants to find Bravo at the height of his power as a photographer, his famed 1932 gelatin silver print Retrato de lo eterno (“Woman Combing her Hair”) seals the deal. The exact translation of the title is “Portrait of the Eternal” and while the more prosaic “Woman Combing her Hair” is certainly accurate, the fantastic inference of “Portrait of the Eternal” is more enduring. 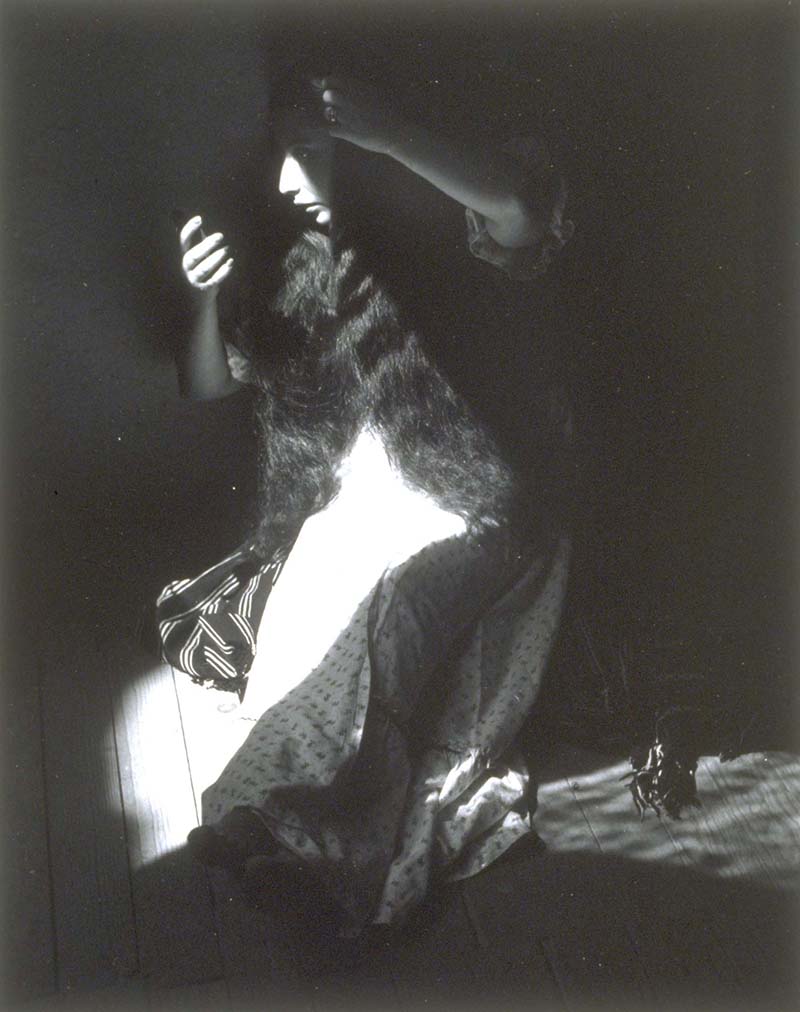 As I noted in the September 2002 UMMA Manuel Álvarez Bravo: 100 Years exhibition, Retrato de lo eterno captures Bravo at his haunting best. This darkly handsome portrait—of yes, a woman combing her hair—is everything its title says. Yet it’s also far more, as Bravo’s key lighting in this black and white photograph boldly exposes the model’s profile while also draping her in a controlled chiaroscuro where graded shadows create layer upon layer of profound mystery. The model’s self-absorbed beauty is veiled in an eternal mist.

Bravo’s Retrato de lo eterno is as much a staggering a work of genius today as it was in 2002. Just consider us lucky to look upon her likeness once again after fifteen years. If only because she’s indeed a portrait of the eternal—and this portrait will be so for a long time to come.

I really enjoyed this

I really enjoyed this review-I don't even usually like photography, but you made me want to see this show. Nice!