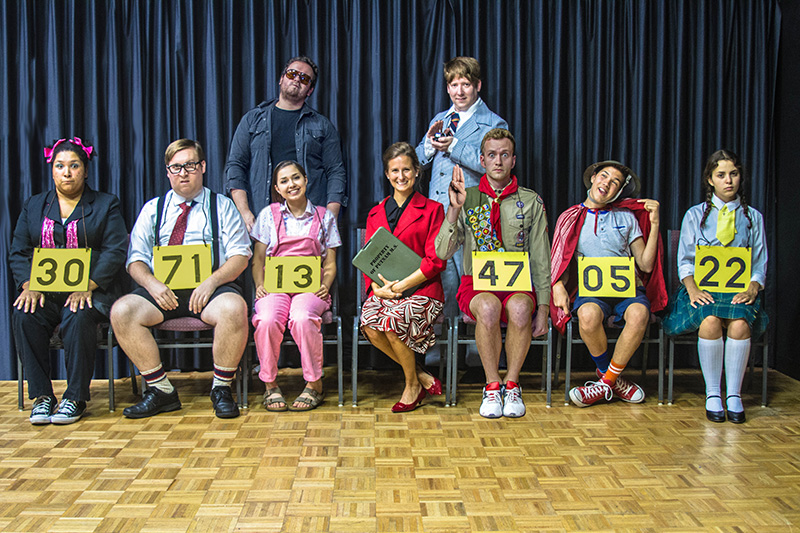 Getting ready for the Spellling Be.

Oh those middle school years, we remember them well. The humiliation, the anxiety, the bullies, the stress, the dire need to be good at something, what a wonderful time it was.

The Ann Arbor Civic Theatre is presenting a happy bit of nostalgia with The 25th Annual Putnam County Spelling Bee, a musical salute to all those anxiety-ridden kids who strived to be top speller.

The Lydia Mendelssohn Theatre on the central University of Michigan campus is a perfect setting. The stage is simply decorated with a banner for the spelling bee, sponsored by the county optometrists, a riser of bleacher seats, a microphone and a table for the two adult hosts.

Spelling Bee takes a quirky, exaggerated look at some gawky budding adolescents and plays it for laughs that lead to some empathy and respect for the troubled young people who often get noticed for all the wrong reasons in school. Director Wendy Sielaff has brought together a fine cast that ham it up hilariously while also delivering the goods when called on to go deeper into character.

The music by William Finn is serviceable but the lyrics are used to convey those deeper feelings, while Rachel Sheinkin’s Tony-winning book richly skewers school life, spelling bees, and the cluelessness of adults.

We know the types. Here they are played not by middle-school-aged children but by older actors in reflection of those trying years.

Emily Fishman is sweet and appropriately apprehensive at Olive, dressed in an innocent pink jumper. Olive is torn between two neglectful parents and wants to finally get their attention. Fishman has a ringing voice, especially effective in "The I Love You" trio with her parents.

Nathan King is the goofy Leaf Coneybear, the non-achieving younger brother who gets no respect at home. But then again he dresses weirdly and shouts a lot. King brings a touch of Jerry Lewis to Coneybear but also some sweet pathos to "I’m Not That Smart."

Keshia Daisy Oliver is Logainne, the daughter of two gay fathers who want her to succeed a little too fervently. Oliver also finds the spot of empathy and a sweet moment of rebellion.

Bob Cox plays Chip, a boy moving into manhood at just the wrong time. Cox is dressed as a Boy Scout with too many merit badges. He is especially funny in "Chip’s Lament," a ditty about the betrayal of puberty.

Hallie Fox is Marcy, the over-achiever, the success-obsessed Catholic schoolgirl who sums up her anxiety with the song "I Speak Six Languages." Fox gives the character that determined to demented look and snappish voice of a future politician.

Finally, we come to the most outlandish contestant, Barfee (or as he insist, it’s pronounced Barfay). Connor Rhoades goes all out in his wrinkled white shirt, tie and shorts. Barfee is a big boy and the ultimate nerd who uses his foot to help him spell. Rhoades is a giant presence throughout but takes center stage with the "Magic Foot" number. He makes Barfee both anxiety ridden, pathetic, and strangely likeable. Rhoades also plays one of Logainne’s Dads (think Modern Family, here).

The other contestants are played (filled?) by good sports selected from the audience, who on Thursday provided some gentle laughs of their own.

The adult roles are also well played. Alison Ackerman is Rona, the teacher who never got over her success at the Bee. She is every bit the prim but enthusiastic teacher who misses the limelight. Ackerman also plays Olive’s absent in India mother in the "Love Song" trio.

Brandon Cave is excellent as the droll assistant principal Doug Panch who gives the spellers their words and much more. He gets some of the shows wittiest lines and he delivers them with low-key panache.

Finally, we have Nick Rapson as the coach who fills in as the sympathetic comforter of the “losers,” and he has just the right amount of sweet toughness and skepticism about the whole process. Thursday he had some humorous improvisation during his "Prayer of the Comfort Counselor" spotlight and made it special. Rapson also plays Olive’s Dad in the "Love Song" trio and is a hoot as Logainne’s other Dad.

Musical accompaniment by an on-stage five-piece band under the direction of Debra Nichols is solid, especially on some of the humorous percussion moments. Reilly Conlon brings the right clumsy humor and daffiness to the choreography.

Sielaff says this play has long been on her bucket list and now she can check it off as a success. She mines both the outsize humor and the quiet empathy that has make this a popular production across the country.

The 25th Annual Putnam County Spelling Bee continues at 8 pm Friday and Saturday and 2 pm Sunday at the Mendelssohn. For tickets and information, go online to http://www.a2ct.org, call (734) 971-2228, or purchase at the theatre before each performance.