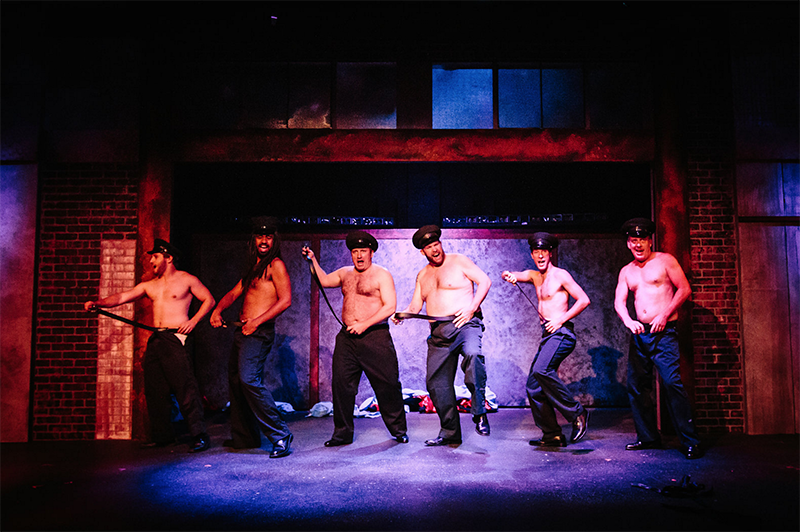 The Encore Musical Theatre Company is taking it all off and going the Full Monty for a lot of laughs and a bit of introspection.

The 1997 movie The Full Monty was part of a long tradition of British comedies with a biting social message. It was hilariously funny and a bit naughty but it was also at times a poignant and carefully observed view of a steel town, Sheffield, England, in the throes of yet another economic downturn.

In 2000 playwright Terrence McNally moved the story from England to equally downtrodden Buffalo, New York, and replaced the lively Top 40 R&B soundtrack with an original score with lyrics and music by David Yazbeck. The musical doesn’t have the grit or the deeper sense of class alienation of the movie, but it does have a nice blend of good humor, touching drama, and a bright jazzy score, which Encore brings beautifully to life.

Jerry Lukowski and Dave Bukatinsky are recently unemployed steel workers. Jerry is divorced, behind in his child support and afraid of losing contact with his middle-school-aged son. Dave is overweight, uneasy with his body and his life. After seeing the excitement created by a Chippendales-style strip show among the local women, Jerry decides that they should create their own show with dreams of making $50,000 and getting their lives back in order. Knowing their bodies would not be a lure, Jerry tells some local women that they will go the full monty, totally nude.

This production gets off to a great start by having two excellent actors in the lead roles. Eric Parker as Jerry brings energy, a bit of self-conscious swagger, and a sensitive change from macho to humane. Parker makes Jerry a full human being in search of who he really is. He isn’t a great singer but he gives real authority to tough songs like "Scrap," comic songs like "Big Ass Rock" and the gentle reflection of "Breeze Off the River," a love song to his sleeping son.

Greg Bailey’s Dave is a lumpish, dragging, sad-eyed mess as Dave. He’s good-hearted but unhappy with his body, his discomfort in what should be a happy marriage, and his loss of a job. Bailey captures just the right amount of languor and hangdog expression to make his transformation toward the end all the more triumphant.

The entire ensemble gives it their all. Dan Morrison is Harold, the laid off manager with the expensive wife. Morrison gives the character a nervous energy that goes from unease to “what the heck” let’s do it charm. Matthew Pecek is the mama’s boy Malcolm and he first appears as a suicidal mess, his thin body tightly wrapped, and then he opens up as he finds himself and love. Pecek, also, has a fine singing voice.

Jordan Harris plays Horse, a black man with the dance skills. Harris brings some extra zip to the dance numbers and some sly comedy when dealing with a certain black stereotype. The last member of the dance group is Ethan, a man obsessed with Donald O’Connor’s ability to climb walls and possessing a special asset for a stripper. Brendan Kelly is funny and also brings a good singing voice to his duet with Pecek.

Gayle Martin is Jeanette, the tough talking piano accompanist who has seen it all and played for the best of them (or so she says). Martin has some great lines, which she delivers with deadpan perfection.

A wilder bit of comedy is served up by the rubber-faced Sarah Briggs who plays Harold’s money loving wife. Briggs is a gifted comic actress who lights up the stage on "Life With Harold," a rollicking affirmation of love, and lets it all out in a later scene where her love shines through.

Alejandro Cantu has the difficult role of Nathan, Jerry’s long-suffering son. He loves his dad and his mom and he kind of likes his mom’s nerdy boyfriend. Cantu is a young actor who understands these conflicting emotions and just what they can do to you. His performance is direct, sensitive, and never “cute.”

Thalia V. Schramm, who co-directed with Matthew Brennan, does double duty as Dave’s concerned wife, and provides the right amount of warmth when things get low.

Schramm and Brennan keep the comedy within the range of reality enough to make the serious moments have resonance. This is a comedy with serious content, from body image to economic justice to the plight of divorced fathers, and it plays them with some degree of respect.

Brennan is also the choreographer and he has the chore of directing some deliberately bad choreography in the beginning and then a triumphant Act One closer on "Michael Jordan’s Ball," a dance inspired by the great Bulls forward.

The small ensemble under musical director R. Mackenzie Lewis gives fine support from their perch. Yazbek’s score is serviceable, with some jazzy moments and a lively "Let it Go" ensemble number at the giddy and satisfying ending.

This is not a show for everyone. It has some rough language and bared backsides. But the end result is not raunchy and the music and story are upbeat.

The Full Monty continues at the Encore Musical Theatre, 3126 Broad Street in Dexter through Oct. 22. For times and ticket information, call the Encore Theatre Box Office at (734) 268-6200 or visit http://www.theencoretheatre.org.