Review: The Purple Rose's Morning After Grace Is a Hilarious and Sensitive Comic Drama 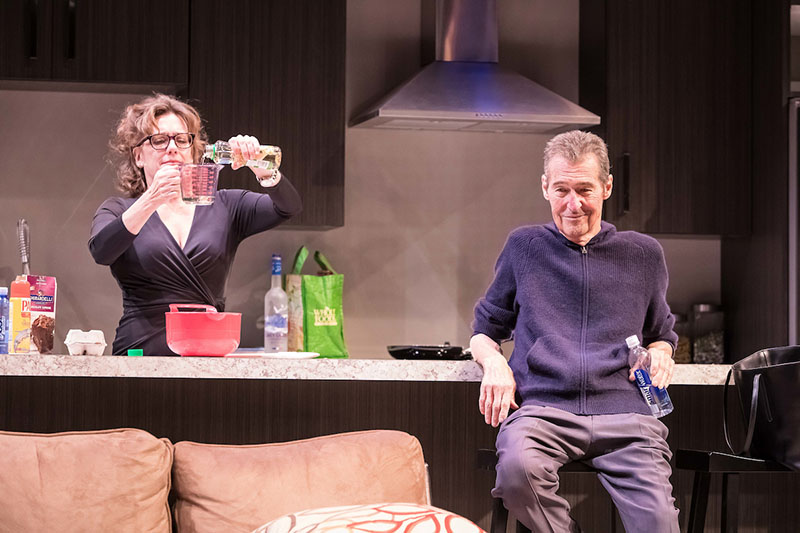 Growing old can be hell but it can also be hilarious as proven by the Purple Rose Theatre Company’s World Premiere presentation of playwright Carey Crim’s Morning After Grace.

Crim’s meditation on aging, marriage and sexual frustration is in the superb hands of director Guy Sanville. A three-actor cast handles the unforced and sparkling humor with the precision of a well-disciplined string quartet while also letting it all out when the humor turns to a cathartic sadness.

The scene is a wealthy retirement community on Amelia Island, Florida. An older but still handsome man stumbles from his bedroom into his living room with all the evidence of a head-splitting hangover. He plops on a couch with a look of bewildered exhaustion and falls into a light sleep. Suddenly, a head pops out from a tangled comforter. A woman’s face peeks out and a giddy, happy grin spreads across her face.

In this small opening we immediately understand the dynamic that will play out in Crim’s play. These two characters were strangers to each other just a day before. They’ve had a night at the man’s condominium. Their very different personalities will delight, challenge and comfort each other over a momentous morning.

The title is a pun. Grace refers both to the religious meaning of divine favor but it also refers to the man’s now-deceased wife, whose funeral is the catalyst for what ensues. In this production, it also could refer to the grace and style of the three performers.

Michelle Mountain is Abigail. Her beaming entrance is a clue to Abigail’s attempts to keep a happy mood as she navigates her way through her mid-60s after a divorce. Mountain is a gifted actress. She is as adept at physical comedy, which she demonstrates with some creative costume changes, as she is with fast repartee. She has an expressive face that can light up with delight and also display deep sympathy. Her Abigail seems to have it all together as a professional grief counselor until bit by bit we learn of her insecurity. But she’s an optimist and sweet-natured, a perfect foil to the stranger she went home with.

Randolph Mantooth is Angus, Abigail’s emotional opposite. He’s a young-looking 70-year-old with some unsettled business with his late wife. But he has long been a taciturn, cynical and angry man. This comes through in some sharp barbs that Mantooth delivers with droll precision. Mantooth’s gruff demeanor has a shaggy dog quality that promises that his bark in worse than his bite, even when things get a bit rough. He seems to be getting the upper hand in his byplay with Abigail, but things take an unusual turn.

Ollie enters the scene. Ollie is another resident at the community. He’s a 66-year-old former Detroit Tiger and Grace’s friend. Played by Lynch Travis, a big man who brings big warmth to the character of Ollie, he could seem menacing, but is really gentle, big-hearted and struggling with issues of his own.

Sanville has a deft touch with comedy. He never allows his actors to overplay or get out of character for the purpose of drawing a bigger laugh. This is comedy rooted in reality. These three fine actors bounce lines off each other that are often roaringly funny but are never delivered as jokes. Crim’s comedy emerges from the characters she has created not from a standard joke book.

It would be unfair to those planning to see the production to say more about the plot, but the story has several amusing revelations that twist the perspective on what we’re seeing. As we begin to understand what has gone wrong with Angus’ marriage, comedy gives way to some agonizing self-reflection and real moments of despair. Mantooth makes these moments chillingly real.

Just as the comedy itself is rooted in the real world, Sanville and set designer Bartley H. Bauer have opted to create a stunningly realistic upscale Florida condo, complete with a state of the art kitchen, which plays a major role in the play. This works well as it makes voyeurs of the audience, giving the sense that we are really there is someone’s apartment watching these three lives entangle.

Crim has premiered five plays at the Purple Rose and has a booming career on regional and Broadway stages. This is an excellent addition to those successes. She’s a witty, subtle but also deeply sensitive playwright. She explores in the real context of this play some serious issues facing older people and she brings true compassion to the questions raised. The play should get produced at many other theaters in the future.

This is a winner for the Purple Rose, a fine play with a superb cast.

Regular performances of Morning After Grace are Thursdays-Saturdays at 8 pm, with 3 pm matinees Wednesday and Saturdays and 2 pm matinees Sundays through Dec. 17 at the Purple Rose, 137 Park St., Chelsea. For more information or to make reservations, call the Purple Rose box office at (734)433-7673 or visit them online.