No More Cakes in the Rain: Colson Whitehead at Lydia Mendelssohn Theatre 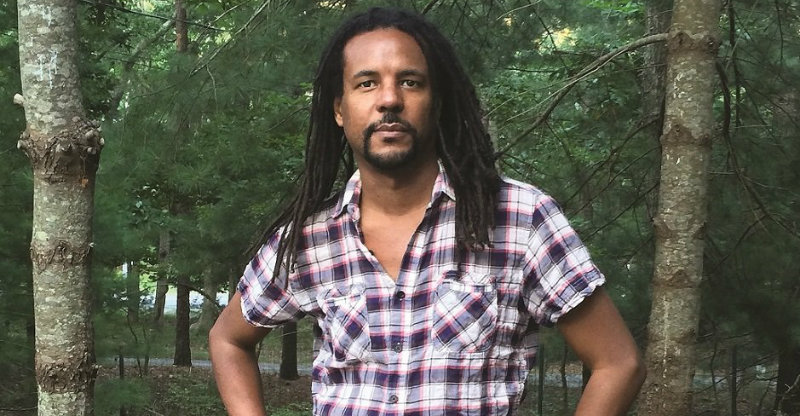 "[T]ake any Stephen King title and put ‘the black’ in front of it, that’s what I wanted to do." --Colson Whitehead

Bestselling author Colson Whitehead spoke in Ann Arbor on January 12 as part of U-M’s bicentennial celebration theme semester, but it wasn’t his first visit to Treetown. Apparently, in 2001, Whitehead gave a reading at Borders to “about five people,” on a night when the Red Wings were playing for the Stanley Cup.

“It seemed like a good excuse,” said Whitehead with a shrug –- this time, to a near-capacity crowd packed into Lydia Mendelssohn Theatre.

Whitehead now has many more published books and years of experience under his belt, of course. But his mainstream profile spiked most dramatically in the last few months, when the publication date of his newest novel, The Underground Railroad, got bumped up a month (from September to August) due to it being named an Oprah’s Book Club selection -- and nothing makes an author’s career explode quite like receiving Oprah’s imprimatur.

That’s far from Railroad’s only distinction, though. The novel also won the National Book Award for fiction and was named one of the best books of the year by The New York Times, The Washington Post, GQ, Newsday, and more.

Railroad tells the story of Cora, a teenage plantation slave in Georgia who flees to the North, seeking her mother. Her means of travel is literally a subterranean train -- rather than the series of routes and “safe houses” that composed the real underground railroad -- and as the locomotive makes stops in different states, Cora is exposed to each region’s strange, sometimes surreal responses to slavery.

Whitehead originally had the idea for the book’s premise in 2000. “I was sitting on the couch when I came across some reference to the Underground Railroad,” Whitehead said, standing at a podium on Mendelssohn’s stage. “When I’d first heard about it in fourth grade, the words were so evocative. I envisioned a little subway that would take slaves north, which is highly impractical. And then my teacher explained how it actually worked.”

Yet remembering this childlike, imaginative flight of fancy planted the seed for a novel that germinated for more than a decade.

“If I’d written it back then, I would have [expletive] it up,” said Whitehead. “So I thought, I will wait, I’ll write more books, perhaps become a better writer, see the world, become more worldly, book passage on a trans-Atlantic steamer or something, butch it up, and one day, I’ll be more mature and be able to tackle it.”

In the interim, he became a well-respected novelist (and MacArthur “Genius Grant" recipient) known for tackling a wide variety of projects: from the realistic roman a clef Sag Harbor to the zombie thriller Zone One; from high concept literary fiction (The Intuitionist, John Henry Days) to a “stunt memoir” about playing in the World Series of Poker (The Noble Hustle).

So it was hardly surprising when myriad pop culture references played a role in Whitehead’s wry, witty hour-plus talk/reading on Thursday night. Near the start, when starting to tell his life’s story, he quoted a line from Steve Martin’s The Jerk (“I was born a poor black child”); he confessed to being a kid who preferred staying in and watching The Twilight Zone or The Outer Limits to playing outside; he’s long admired Stephen King (“I wanted to write the black Shining or the black Salem’s Lot. Basically, you take any Stephen King title and put ‘the black’ in front of it, that’s what I wanted to do”); his early work for The Village Voice included writing about the season finales of Who’s the Boss and Growing Pains (“Looking back, I think it stands as the definitive think piece about those two shows”); and a tangent about MacArthur Park that led him to play an excerpt from Donna Summer’s cover from his tablet.

This obstacle was preceded by Whitehead’s first failed attempts at creative writing in college. He wore black, smoked cigarettes, and wrote two “five-page epics” that he submitted for admission into creative writing courses. “I was turned down both times,” he said. “I was very depressed, but looking back, it was good training. Because when you’re a writer, no one wants to read your stuff, everyone hates you, and if you internalize that early on, you’ll be in a good place later.”

After reading a few excerpts from Railroad, Whitehead answered questions from the audience, including one about employing genre to tackle difficult topics.

“Genre is just a tool, a way of talking,” Whitehead said. “My motto with this book, with the fantastic [elements], was, I’m not going to stick to the facts, but I’ll stick to the truth. And the fantasy genre is a good way of getting to the truth sometimes.”