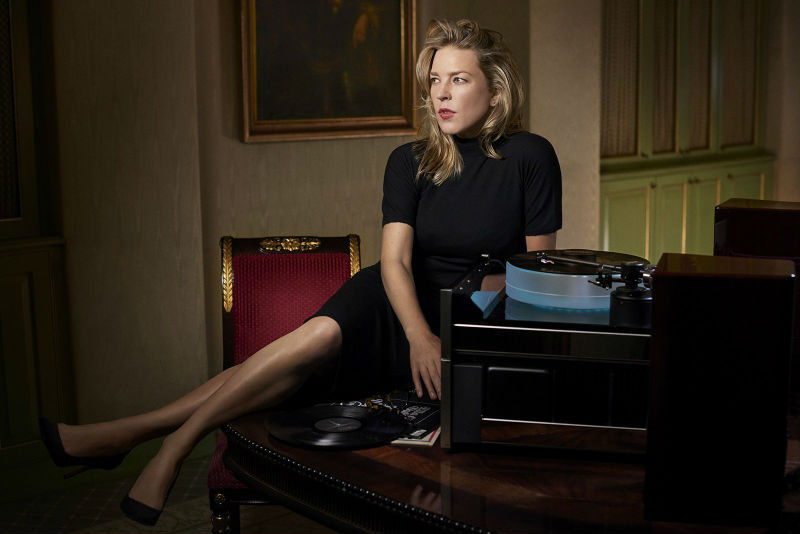 Diana Krall had "the best seat in the house" on Tuesday at Hill.

That long-gone Main St. jazz club, which closed in 2004 after nearly 20 years in business, hosted performances from Krall early in her career (which she mentioned early in the evening); and I’m likely not the only one who had flashbacks of being in that smaller space again as Krall opened Tuesday night’s show with her fun, flirty take on “‘Deed I Do,” and then, shortly after, applied delicate, quiet keystrokes on the Nat King Cole hit “L.O.V.E.” – a song featured on Krall’s latest album, Turn Up the Quiet just released in May.

But Krall had yet another local tie: accompanying her on-stage was U-M professor and bassist Robert Hurst -- along with guitarist Anthony Wilson, violinist Stuart Duncan, and drummer Karriem Riggins. Each musician performed like a star in his own right, featured repeatedly on complex, transporting solos throughout the evening, but they were also extraordinary as a musical unit.

“I love playing with you guys,” Krall told her band at one point. “I’ve got the best seat in the house.” (Krall also said, later in the show, after another solo-packed tune, “Sometimes I forget there’s a singer in the band.”)

One of the thrills of hearing songs interpreted through Krall’s silky jazz filter involves the range of her musical tastes. Though Irving Berlin got the most love on Tuesday night -- “Blue Skies,” “Let’s Face the Music and Dance,” “How Deep Is the Ocean” -- Krall also ventured into Tom Waits’ haunting “Temptation” (which featured the band members’ longest and farthest-reaching solo breaks); offered an achingly plaintive take on Bob Dylan’s “Wallflower” (which closed out the night’s five-song encore); delivered on The Band’s bluesy “Ophelia" and “Almost Blue” by Krall’s husband, Elvis Costello; and lovingly crafted what, for me, was the evening’s highlight, Joni Mitchell’s mournful, longing-drenched “A Case of You.”

Krall’s musical phrasing (delivered in her husky, unfailingly smooth contralto), paired with her impressive jazz piano chops, make her concerts feel like a sensuous, Siren-like seduction. Krall exuded a charming coyness via jaunty renditions of standards like “Just You, Just Me,” “Night and Day” (with a prolonged decrescendo at the end that nearly took my breath away), Peggy Lee’s “I Don’t Know Enough About You,” and “Sunny Side of the Street,” while more earnest desire was given voice in “I’m Confessin’ that I Love You,” “Moonglow,” and “Isn’t it Romantic?” But perhaps the most urgently erotic moment of the show came via the slinky, slow tango “Sway,” another cut from Krall’s latest album.

Dressed in a black, knee-length dress with black tights, and flopping her long, honey-blonde hair to either side throughout the show, Krall presided over a black grand piano on the left side of the stage, in front of projected images that changed with each song. (The art photos were often blurred images of people, or natural settings with glowing objects integrated into the scene.) The musicians were often bathed in red light, adding to the intimate jazz club atmosphere.

Given the dazzling musicianship on display on Hill’s stage, perhaps it’s not surprising that Krall’s most comfortable when letting her songs do most the talking. Once, she backpedaled from sharing a story between songs, stopping herself before she got started; and when she got verbally stuck mid-sentence while describing how she hoped the concert’s music would make us feel, Krall concluded, “I guess that’s why you sing in church.”

The gist of the comment, of course, was that sometimes, you should simply let music say what’s difficult to put into words.

And Krall’s appreciative audience was more than happy to listen to the thrilling musical conversation that unfolded on Hill’s stage.