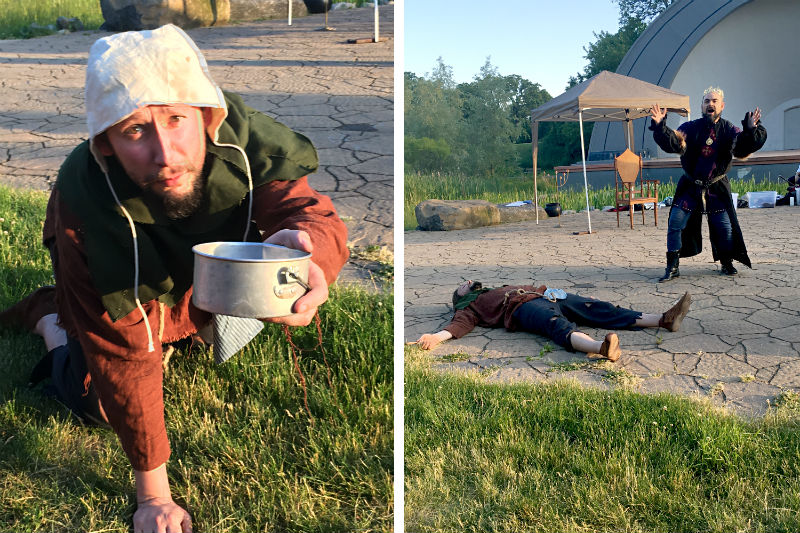 At least, it does in Joseph Zettelmaier’s Renaissance Man, now having its world premiere via Penny Seats Theatre.

A riff on Macbeth and staged outdoors -- at West Park, in front of the band shell -- Renaissance tells the story of behind-the-scenes unrest at a fictional Renaissance festival called Gloriana. Longtime knight Martin Mackabee (Patrick Loos) and art school dropout/face painter Emma Murtz (Kelly Rose Voigt) connect partly through their shared frustration that the fair is not more historically accurate, and bristle against the inclusion of anachronisms like drench-a-wench, elves, leather corset vendors, gypsy fortunetellers, and turkey legs. Gloriana’s benevolent, permissive “king,” Chuck Duncan (Robert Schorr), earns the pair’s scorn, and Emma takes action, entrapping Chuck so that he must resign from Gloriana.

But if you remember your Macbeth -- or even if you don’t -- you can probably guess that Martin finds that, to quote yet another Shakespearean king, “Heavy is the head that wears the crown.” When Martin and Emma transform the face painting tent into a plague tent, and turkey legs are replaced by boiled herring and turnips, and charming minstrel Eli Duffy (David Galido) is recast as a consumptive beggar, the fair’s business dries up, and Martin and Emma have to reflect on their actions, motives, and ambitions.

Part of this process involves a talking (and stained, of course) shirt, but at the risk of ruining a delightfully weird scene, I’ll leave it at that.

Despite a couple of minor microphone/sound glitches on Friday night, and the inevitable difficulty of landing quick punchlines in a wide open space, Renaissance Man is generally well-suited for an outdoor production, largely due to the fact that Renaissance festivals are staged at fairgrounds or parks. Plus, seeing non-attendees walk through the park as the show is unfolding just contributes to establishing the play’s world.

Zettelmaier directs his own work for the first time with Renaissance, and there’s no denying the results. The two-hour play’s tricky tone, which balances earnestness with absurd silliness, feels almost organic with the show’s author at the wheel. Zettelmaier’s personality-packed voice -- which offers some delicious bits of drive-by pop culture explication -- comes through all the more clearly when he can guide precisely how it’s conveyed on stage.

But actors are part of this equation, too, of course, and Zettelmaier’s cast seems a perfect fit. Loos and Voigt wholly commit (as they must for the play to work) to their characters’ doomed, sweetly deluded mission to present a Renaissance fair that educates instead of entertaining -- as Emma says, Gloriana should not simply be “a place for corseted normals to get their freak on.” Loos and Voigt slyly sidestep the pitfall of mocking their characters by making them sincere, flaws and all.

Schorr provides a sympathetic, likable foil, playing a usurped king who suffers not death, but rather a professional demotion to food service. Julia Garlotte, as a longtime, outspoken Renaissance fair fortuneteller named Becky (who must switch roles to play a prostitute under Martin’s rule), plays older sister to Annie Dilworth’s Laney, a new Renaissance fair staffer who gets involved with the love-em-and-leave-em minstrel Eli (David Galido). Yet Galido inevitably woos the audience, too, offering a winning performance that has charm, humor, and heart.

Garlotte also designed the show’s sound, which plays no small role. Recorded voices intended to be fair visitors, or disgruntled employees, or the hoofbeats of a joust, or simply a backdrop of crowd noise help fill out Zettelmaier’s story considerably; and costume and props designer Ben Despard does a fantastic job of outfitting the actors with convincing Renaissance fair costumes that are flexible enough, and lightweight enough, to allow the performers to do all they need to do.

I must mention, though, that while making my way to Renaissance Man, a kid playing in the park asked, “Are you going to watch the play?” I nodded, and he replied, “There’s lots of cussing in it.” Though this might be an overstatement, attendees should know that profanity -- along with some light “making out” -- make the play more PG than G. Plus, the play’s raison d’être is to give audiences a light, funny, enjoyable show, so it’s a theatrical amuse-bouche instead of a meaty main course. (So ends the French-heavy portion of this review.)

Audience members less-than-familiar with Shakespeare’s “Scottish play” will likely key in to the way Renaissance Man wittily pokes affectionate fun at its subject (and geek-trends like “live action role playing,” better known as “LARP-ing”). Meanwhile, those more familiar with Macbeth will enjoy the added fun of spotting the various echoes in Zettelmaier’s script and watching how the playwright solves various tricky “comedy translation” problems. For although an old saying claims that “comedy is tragedy plus time,” this seemingly simple addition becomes something akin to advanced calculus when you must determine how to tell the story of a Shakespeare tragedy without a single death.