The University of Michigan School of Music, Theater, and Dance's “Summit of Creativity: A Celebration of the 50th Anniversary of The Beatles’ of 'Sgt. Pepper’s Lonely Hearts Club Band'" drew experts from across the country in June to examine and analyze this timeless music with an academic panache typically reserved for the likes of Shakespeare, Gilgamesh, and radioisotopes.

By contrast, U-M musicologist Walter Everett’s 46-item exhibit 50th Anniversary of the Release of 'Sgt. Pepper’s Lonely Hearts Club Band' is tidy in comparison to the sprawling analysis bestowed on The Beatles and this record in particular. Both the band and Sgt. Pepper's are now part of the firmament in our shared cultural and intellectual history, and they are now well worthy of deep study and scrutiny. But The Beatles certainly didn’t conceive the album with all that in mind.

The Beatles were up against the proverbial professional (and commercial) wall in the mid-1960s. They had embarked on a remarkable half-dozen-year transformation from their late 1950s hometown Liverpool adolescence (via their far more mature Hamburg Reeperbahn apprenticeship) and the darling mop-top era of “A Hard Day’s Night” to John Lennon’s belated cry for “Help!” The lads’ history was quite unlike the journey of other creative artists in modern history.

Their closest teen-pop idol analogs were vocalists Rudy Vallée in the 1920s, Frank Sinatra in the 1940s, and Elvis Presley in the 1950s. But as Rolling Stones frontman Mick Jagger smartly pointed out during The Beatles' introduction into the Rock and Roll Hall of Fame, the band was a four-headed monster, with each member contributing to the group's sound and aura.

Of course, it was a four-headed monster the world adored, but by 1965 it was -- to borrow from George Harrison -- all too much to continue as it was. The band no longer wanted to tour after almost a decade of relentless live performances, and The Beatles' direction forward would have seemed daunting by any stretch of the imagination.

As Everett writes in his “An Appreciation of 'Pepper,' Fifty Years On” (Beatlefan 38/4, May-June 2017): “Paul (McCartney’s) late-1966 concept of forming a fictitious ensemble like the municipal brass bands common in northern England would provide The Beatles with a group alter-ego that could free the musicians from any self-conscious blinders (not to mention career burnout), permitting a new flow of creative juices.”

And what a kettle of creative juices was unleashed. From experimentation in composition and recording to using electronics, BBC library sound effects, and a 40-piece orchestra, Sgt. Pepper's rewrote the book on popular music and popular culture. In one grandiloquent gesture, the teen beat was newly wedded to the circus, music hall, world music, electronic music, and avant-garde in what was ostensibly supposed to be rock-n-roll. 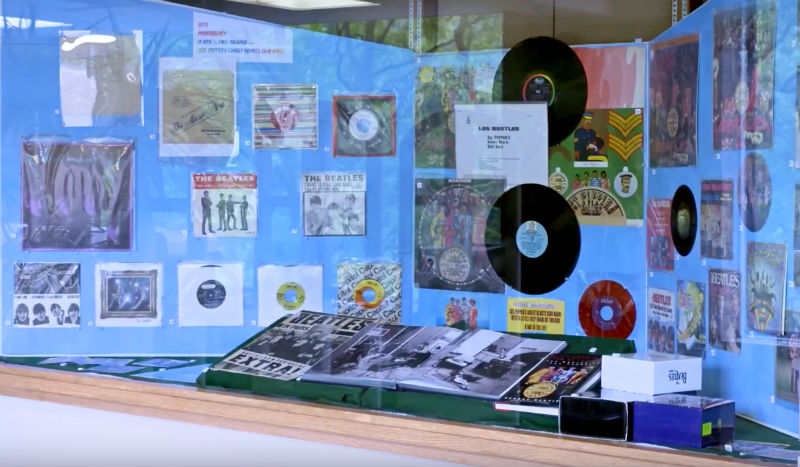 Studying The Beatles behind glass in the Earl V. Moore Building.

All of this is quite a heavy load -- intellectual and otherwise -- to bear. But what makes Everett’s 50th Anniversary of the Release of 'Sgt. Pepper’s Lonely Hearts Club Band' so refreshing is it shows the sheer effervescence of The Beatles’ Summer of Love. This display is an unalloyed visit to that period of transition from Beatlemania to what was to become Beatle academia.

For as Everett’s work reminds us: Sgt. Pepper's was nothing if not hard work -- as well as a fun ride. The album holds up superbly to listening and re-listening. And as this display happily shows us, you can never get enough Beatles paraphernalia.

The exhibit’s backbone is a variety of Sgt. Pepper's albums manufactured around the world. And while each of the covers looks virtually the same, there are subtle differences from market to market in the album’s famous artwork by Peter Blake, Robert Fraser, and Jann Haworth. One of the most interesting aspects of the display is studying the minute differences between these covers and the other paraphernalia.

There are multiple copies of McCartney’s “Penny Lane” b/w Lennon’s “Strawberry Fields Forever” 7-inch single that was excluded from the album because The Beatles' label insisted album sales would decrease if the songs were included on Sgt. Pepper's. Additionally, a British sleeve features famed American photographer Henry Grossman’s photo showing The Beatles with facial hair, and a promotional 45 RPM single has a “Factory Sample” sticker attached to its February 1967 pressing.

But perhaps the topper-most of the display’s featured attractions are two sets of the Fab Four’s autographs. One set of signatures is on a record-store bag from The Music Shop, located in Widnes, a suburb of Liverpool, acquired just after the band’s 1962 debut, “Love Me Do.” And the second set of autographs is on a 1964 Beatles in Paris magazine signed aboard Pan American flight #101 during the group’s first trip to America.

Mix in ample photographs drawn from the era and what’s readily apparent is the hard work these musicians put into their art, which is also reflected in subsequent boxed sets of their music. If absolutely nothing else, it’s obvious that being a Beatle was heavy lifting. The fact that all four members of the ensemble fared as well as they did under this pressure is a testimony to their strength of character and willingness to endure the strain of celebrity and focus on their art.

Related:
➥ Walter Everett talked about The Beatles and Abbey Road on April 19, 2017, at the Downtown library: video.