The photography exhibit "In Transit" travels all around Ann Arbor 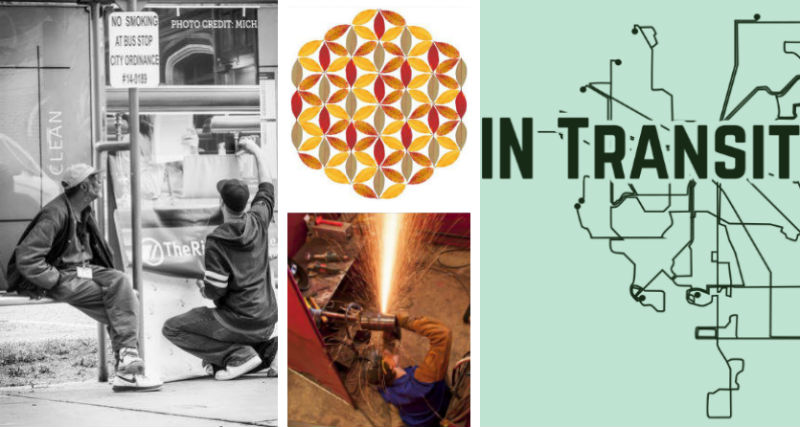 With over 70 photographs on view in locations throughout Ann Arbor, In Transit is a lively, four-headed monster of an exhibition. From the back hall of the City Council Chambers to The Session Room on Jackson Avenue, to the buses (inside and outside) of TheRide, this collection of photos by current and former photography students at Washtenaw County Community College will be all over town for the next three months.

But the best place to see all these photographs celebrating the local places and people of southeastern Michigan is right now through September 30 in Gallery 117 of the Ann Arbor Art Center.

Four members of the WCC photographic technology faculty -- Terry Abrams, Don Werthmann, Morgan Barrie and Jennifer Baker -- teamed up to curate and install In Transit. But the original idea for the project can be credited to Omari Rush, vice president for strategic initiatives at Ann Arbor Art Center, his final gift before leaving a position there to become executive director of the Detroit-based Culture Source.

In order to organize the many images of In Transit into a somewhat manageable form, the four curators divided their work by themes: "Black and White Photography," "WCC Campus Life: Environmental Portraiture," "Composite Photography," and "Discovery: Photos by Students in the WCC Photography I Class."

"Black and White Photography," curated by Abrams, features selections that, in addition to their monochromatic format, are the most thematically limited in their scope. The photographers for the black and white photography section “rode on buses, photographed bus stops, visited the AATA bus depot for behind-the-scenes images.” This may sound like a dry approach, but the formal limitations lend an elegant and thoughtful mood to the pictures of bus interiors, bus drivers, and humans in transit. The winner of the award for black and white photography was Jeannette Woltmann for her photograph Advice.

"WCC Campus Life: Environmental Portraiture," curated by Werthmann. These selections are part of an ongoing project that records and archives the people and places that make up the WCC population. Photographers from this section of In Transit were required to work as a team, taking on the roles of photographer, lighting technician, or location manager to generate images worthy of their subjects. Winner of the Campus Life Award was Robert Conradi’s WCC Metal Fabrication Department.

"Composite Photography," curated by Barrie, included an eclectic assortment of images whose only commonality is a technical directive to make use of a wide range of methods “to create new and impossible worlds.” Barrie comments, “Students in introductory courses are often drawn to make these images as soon as they've learned the most basic workings of their camera. Given this pull to make composites, it's surprisingly hard to get it right. Creating something that is more than the sum of its parts requires forethought, commitment, and technical prowess.” The Composite Photography award went to Misty Lyn Bergeron for Flower of Life, a quilt-like abstract design built from photographs of autumn leaves. The Best in Show award, also named in this category, was Founding Infrastructure, a moody perspectival photo by Jeffrey Singleton.

"Discoveries: Photos by Students in the WCC Photography 1 Class," curated by Baker, provides the most eclectic body of work of the four collections. The photographers included in "Discoveries" are relative novices, but these photos show that the exhibiting photographers have acquired a solid grasp of their technical means in a remarkable variety of images. Baker describes the students in the class as being on a “journey of discovery.” Like all of the pictures shown in In Transit, the photographs were impressively professional in presentation, well framed and well displayed. The winner of the Discoveries award was Anne Marie Shields for her Turning Point.

The artists of In Transit once again demonstrate the power of photography to capture, within the limited means of the camera’s eye, the special essence of an individual, the unexpected beauty of a place, the brief poignancy of a moment. During the next three months, when these images will be on view around town and displayed in the buses of the AATA, Ann Arbor will be able to look into a kind of multifaceted mirror and see what is special and beautiful about this place and time.

"In Transit" appears in various spots in Ann Arbor for various durations. The pop-up exhibitions are at City Hall’s City Gallery (100 N. 5th Ave.; through Nov. 3) and The Session Room (3685 Jackson Rd.; through Oct. 3). The moving exhibition runs for three months on TheRide's fleet of 100 buses. The stationary exhibit is at Ann Arbor Art Center (117 W. Liberty St.; through Sept. 30). Visit annarborartcenter.org for more information.