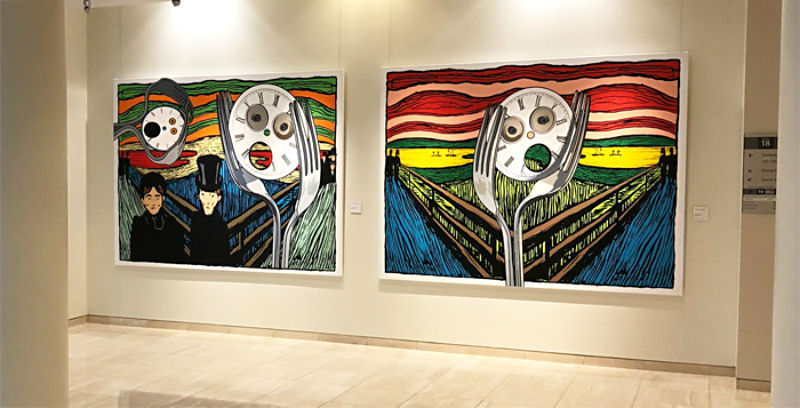 “Human identity is built upon strong currents that are constantly changing, [over] ... a well-traveled riverbed of history.”

Detroit artist, gallerist, and thinker Adnan Charara knows a thing or two about art and about history, and in Constructs (Noun), a colorful and comical exhibit of his recent paintings, he shows himself an able architect of identity, using bits and pieces of art history to create a whole that is greater than the sum of its parts.

Twelve large acrylic paintings from two different, but related, bodies of work form the substance of this beautifully installed exhibit, on view at the Rotunda Gallery in Building 18 of the University of Michigan’s North Campus Research Center until December 18.

The newest artworks, a series of large paintings entitled After Munch I - VI, are adapted from one of the most iconic paintings of the late 19th century, The Scream by Edvard Munch. Painted in 1893, the painting (there is also a companion print) is one of the most famous masterpieces of European Expressionist art and among the first to describe feelings of alienation and anxiety, which were then the newly discovered twin ills of industrial civilization. Munch, who suffered from depression, believed that life was full of agony due to pressure, deep thought, worry, and mental strain.

Over time, The Scream has proved to be not only widely recognizable and relatable, but eminently quotable and spoofable. Even Andy Warhol tried his hand at a print of the image as have many other lesser artists, so Charara is in good company when he subverts the original to say something perceptive about our contemporary distracted state of mind.

While Charara seems to be having none of the brooding self-seriousness that characterizes Munch’s work, he is far from suggesting that all is well. The mood of these paintings is jittery and over-wrought. Clock faces that seem to have wandered in from a Dali painting wave their fork-like hands in ineffectual distress, mouths wide open in a comic Seinfeld-ian cry. They seem to proclaim that life is tragic but not serious. Heavy black striations, reminiscent of Munch’s etching of the same name, punctuate flat and saturated comic book colors. All of the paintings in this series feature symmetrical compositions and shallow pictorial space. Two figures that appeared to recede into the background of the original are now headed straight for us in After Munch I and II (are they lost?) before disappearing from paintings III through VI (have they left the building?). 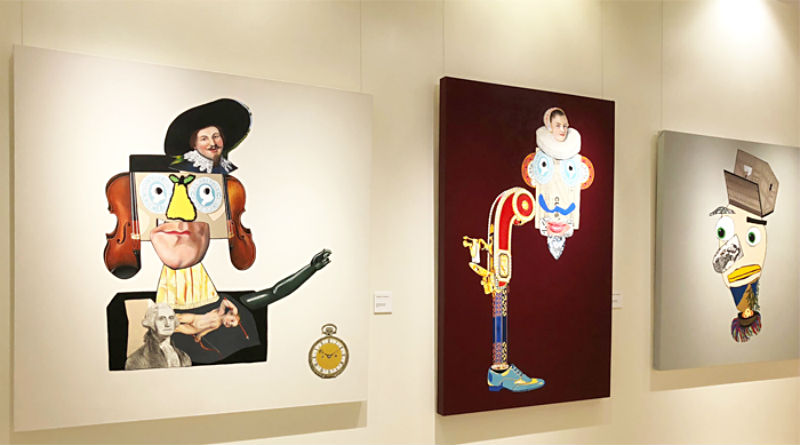 Adnan Charara channels Dadaists in the other set of paintings in Constructs (Noun).

The other series in Constructs (Noun) is a lower key, but still broadly humorous, group of slightly smaller paintings loosely organized around a compositional scheme that features a single figure on a flat ground, each one composed of scraps and fragments from the attic of art history. Details of paintings by Ingres and van Dyk, postage stamps, currency, and bits of typography from all periods make up these engaging, puppet-like figures and seem to suggest that every human is a collection of disparate parts that make up a coherent whole (if you are lucky). Here, Charara seems to be channeling any number of Dadaists plus Arcimboldo for good measure. In this group of paintings, his color choices are more nuanced and personal than those in the After Munch series, and the visual back-and-forth among the artistic styles makes for some interesting correlations and contrasts. The six paintings appear to be enlargements of much smaller collages; it would be nice to see the originals if they exist.

Charara may be working in a comic vein in Constructs (Noun), but he is also serious about what he considers to be art’s central purpose. In his statement, he makes a persuasive and impassioned argument in favor of the artist as a visionary, pointing the way from the past to a possible future. “Artists express the constructs around us and propose possibilities of new ones," he says, "revising, rebuilding, reconstructing the narrative that surrounds the human condition, using all the scraps of artists, dreamers, rulers, warriors, oppressors, the oppressed; art molds and frames the future.”

Like many of the art venues sprinkled liberally around the University of Michigan campuses, the Rotunda Gallery is a bit off the beaten path, but quite easy to get to once you know the way. It is located in Building 18 of the North Campus Research Center, 2800 Plymouth Road. The entrance to the campus is on Plymouth. When you enter, turn left. Building 18 is clearly marked, and there is ample parking. The Gallery is open Monday through Friday, 9 am-5 pm, and well worth your time to visit.