Just Say Yes! ypsiGLOW is all about the affirmative 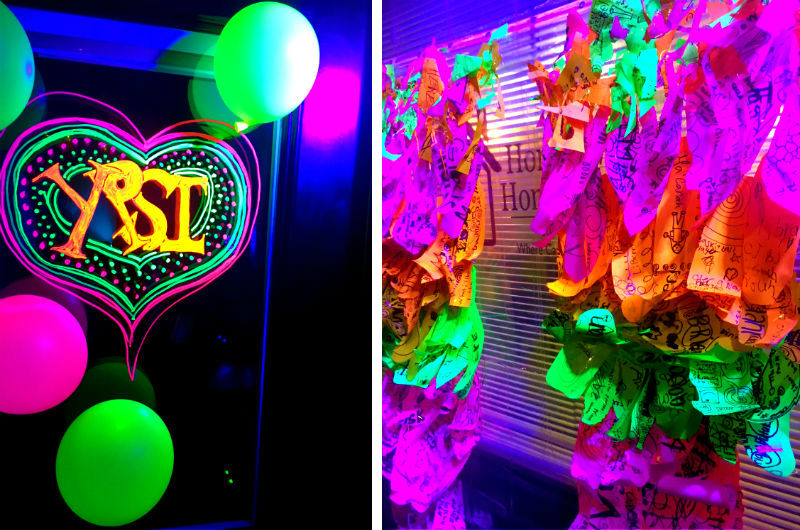 WonderFool organized a month of creative workshops, which culminated in the second annual street party ypsiGLOW on Oct. 27. Photos by Sherlonya Turner.

It turns out that if you make a large, wave-shaped luminary that complements your shiny green mermaid costume, a lot of people are going to stop you and ask whether you’ll take a picture with them. When you set out specifically to participate in a unique community event, sometimes, you just say, "Yes." It was a luminary-making workshop that made me add ypsiGlow to my calendar. In the weeks leading up to the downtown Ypsilanti light-up dance party, Wonderfool Productions hosted drop-in GLOWorkshops at the Riverside Arts Center where community members were invited to come make luminaries and or costumes for the Oct. 27 event. A sucker for learning new skills, I had attended one of the workshops simply interested in learning how to make a luminary. One of the artists asked me what I wanted to make as I began familiarizing myself with the materials and observing other workshop attendees. That’s when I told her; it was the first "yes" of this experience.

My son was not as confident in my new luminary-building skills as I had become. He watched, openly dubious, as I worked on it over the weeks since that first workshop. Finally, two days before ypsiGLOW, he conceded that it did look like a wave. The day before he told me that it actually looked good. When I did a test run for the makeup I planned to wear as a part of my costume, he was bluntly skeptical. “See! I’m a mermaid!” “That makeup makes you look dead.” I’m not a cool kid, never have been.

Video by Sherlonya Turner. The second annual ypsiGLOW was an opportunity-for-growth, to head out to an event that called itself a nighttime dance party. I started off at Cultivate Coffee & TapHouse, where face painting had taken place, and missed the processional from Depot Town to downtown. This mermaid felt a bit like a fish out of water, especially after being asked whether I was the Emerald City. Who knew that a group of young people would know Ginuwine’s "Pony"? I didn’t, but alas, it is true, as I discovered downtown when a group of them hyped up in response to the song I was surprised. The dancing underneath the tent was vigorous, and at one point I watched a young lady who didn’t seem to be following all of the rules of physics and biomechanics. There were lit up dancers of all types in costumes of all kinds including a pretty impressive giraffe and an umbrella-based jellyfish. I’d never seen anything quite like it. 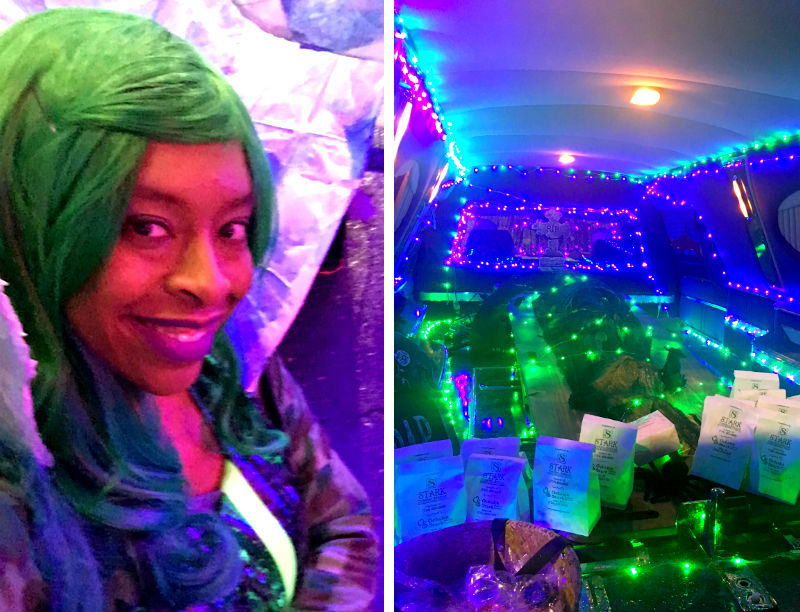 The mermaid -- er, author -- swam through ypsiGLOW 2017, which included a stop at Stark Funeral Service (just for a view inside the hearse, not for a ride in it). Photos by Sherlonya Turner.

The advantage of wearing a wave over your head on a cold and rainy night is that you’re not actually being rained on. The downside, especially, if you’re already tall, is that it makes navigating spaces tricky. This and the line leading from the building is how I missed the labyrinth, which I heard good things about all night. I was, however, successfully able to navigate an exhibit by local artist Scott Wedemeyer, which was displayed in a specially lit room at Go! Ice Cream. As I shuffled through Wedemeyer’s work with a pretty packed group of costumed strangers, it felt almost like you were in another world, though his art thematically encourages the viewer to consider the details in day-to-day living. One of ypsiGLOW’s aims is to literally highlight some of the businesses that are in the area. As an Ypsi resident who regularly takes fitness classes nearby, I had never walked into one of the shops that was open during this event. A display on the window enticed me to peer into another storefront that I wouldn’t have even glanced at on another occasion. I was successfully pulled in. I came. I saw. I danced. I said, "Yes." Afterward, I showed my son a small video of his mother dancing at this community dance party. He nodded approvingly, and then said with an offensive amount of incredulity, “You actually made that work.” Yes, son. I did.