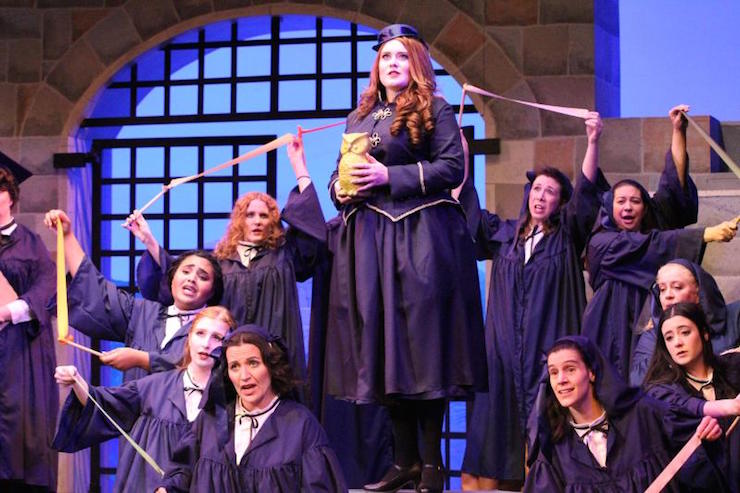 Princess Ida and the Undergraduates of Castle Adamant. Photo courtesy of UMGASS.

The University of Michigan Gilbert and Sullivan Society (UMGASS) is one of campus's most venerable and long-lived community arts organizations, and they can be counted on to produce two excellent classic operettas each year. This term, they've taken on Princess Ida, or Castle Adamant; not one of Gilbert & Sullivan's most popular works, but just as delightful and witty as ever.

Directed by David Andrews, a cast of UMGASS regulars and some campus rising stars come together this weekend to stage this story of betrothal, education, evolution, the military, tenure, cross-dressing, and generally singing "hoity-toity" a lot.

David Andrews chooses a setting mostly contemporary to the 1884 debut of Princess Ida and sticks pretty close to the script; there was one clearly added throwaway gag that got a big laugh. Whether this was improv or planned, it worked! U-M Freshman Alexandra Kzeski takes the title role, an unusually forthright and strong G&S heroine, who walls off 100 women in Castle Adamant to form a Women's College. Kzeski has the presence and power to pull off this role and shines in every scene. Christopher Kendall (playing one of the great G&S hero names, PRINCE HILARION) takes the male lead once again and continues to deliver; his mugging, lovestruck dopeyness, and powerful voice have become a staple of recent UMGASS productions.

I hope to see him in several more productions before he returns to his native Llanfairpwllgwyngyllgogerychwyrndrobwilliantysiliogogogoch in Wales. (Stunt Bios are always appreciated.) Some G&S works are powered by pairs, but Princess Ida is heavy on trios, and the leads are joined by UMGASS regulars from the supporting cast to form some outstanding trios. Kendall is joined by his friends and sidekicks, Patrick Takata as Florian, and Sounak Raj Das as Cyril. These are very funny roles hilariously delivered; Takata, in particular, steals several scenes, and the three of them together just nail the back-to-back trios of the first act. Similarly, Ida's soldierly brothers, Arac, Guron, and Scynthius have some of the funniest moments in the production, and their deadpan, bass delivery, solid slapstick, and perfect dishevelment are a highlight. Guron is played by Stephan Lemmer, and Scynthius by Jeff Spindler, and Natan Zamansky as Arac does an outstanding job with the soldierly disrobing solo "This Helmet, I Suppose." UMGASS's stable of regulars is truly deep, including other wonderful performances from Don Regan and Phillip Rhodes as the warring kings, and lots of familiar faces in the chorus. UMGASS newcomer and U-M Alumna Elizabeth Mitchell as Lady Blanche and BGSU student Amanda Williams as Lady Psyche turn in excellent performances and keep the lady undergraduates in order. So, don't miss this brief chance to see one of Gilbert & Sullivan's most wry but underappreciated works at the Mendelssohn Theatre this weekend; where else can you hear heavenly voices sing that "Man Is Nature's Sole Mistake," and even better, that "Darwinian Man, though well-behaved, at best is only a monkey shaved."

UMGASS presents Princess Ida, or, Castle Adamant, continues December 8, 9, and 10 at the Lydia Mendelssohn Theatre. Tickets are available at Brown Paper Tickets or at the door.