Artistic Pedagogy: "Dancing Globally" at the University of Michigan 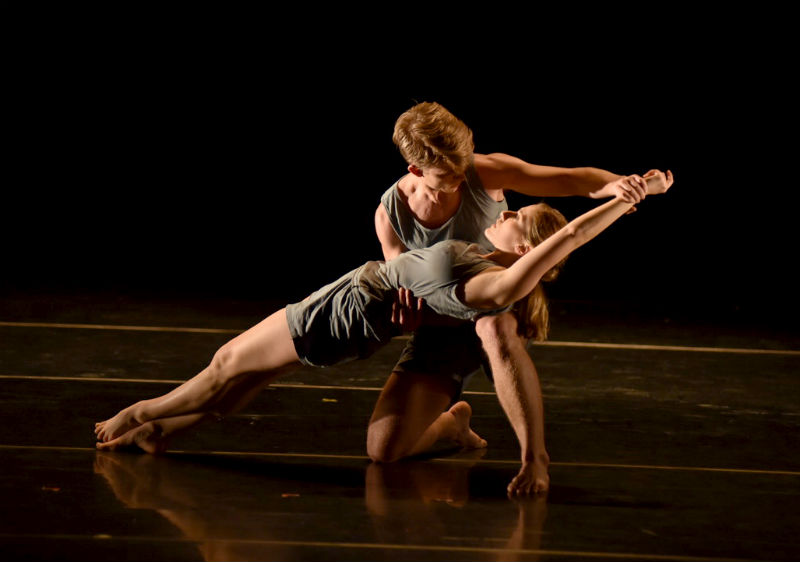 You’re setting the energy level pretty high when you blast a Dick Dale surf-guitar version of “Hava Nagila” before the lights even go down. My expectations were high, too, for the first night of University of Michigan Department of Dance’s four-day Dancing Globally event (Feb. 1-4).

Kyr (1990), the first piece in Dancing Globally, maintained Dale’s intensity with more electric guitars courtesy of a recording by Israeli rock band Tractor’s Revenge, but more important to the continued buzz was the choreography of Ohad Naharin (artistic director of Israel’s Batsheva Dance Company) and the way the dancers inhabited it.

Seated in a semi-circle, they writhed and exploded, the power of their individual movements amplified by the 17 bodies in unison. When they ejected themselves forward -- navel leading and arms flung back, except for one who repeatedly smashed face-first onto the floor -- or stood legs wide, shouting along with Naharin, they seemed to tap into a more potent source of power than I expected from teenage dancers.

Naharin’s other two dances on the program -- Anaphase (1993) and Mabul (1992) (both, like Kyr, are excerpted from longer works) -- were less high-octane but just as satisfying. Anaphase featured six women lined across the front of the stage, the sound of a metronome propelling them from one off-kilter, sharp-cornered shape to the next. Sometimes the beat seemed to flip a switch in some joint, sending out a current that dissolved hard edges, then softness flowed down a spine or out an arm. When the line shifted, the woman farthest left disappeared offstage. But there were still six dancers since a different woman joined the line on the right. Maybe there were a hundred women lined up and twitching to the beat, the proscenium revealing only these.

Mabul is a wonder, and dancers Madeline Joss and Nicolas Hopkin were wonderful in it -- and I say that even with the memory of Batsheva’s own dancers on the same stage last January. Hopkin swept Joss overhead in an arc, the potentially balletic elegance of it offset by the fact that he supported her with an arm through her legs, holding her butt. Later, Joss was stacked on his shoulders like a momentary totem pole. Repeatedly, Hopkin pursued Joss like a fairy-tale dwarf -- crouching and shaking his clasped hands as though salting the ground -- but they also floated and intertwined so delicately. They had something of the prince and princess as well as the less refined creatures. 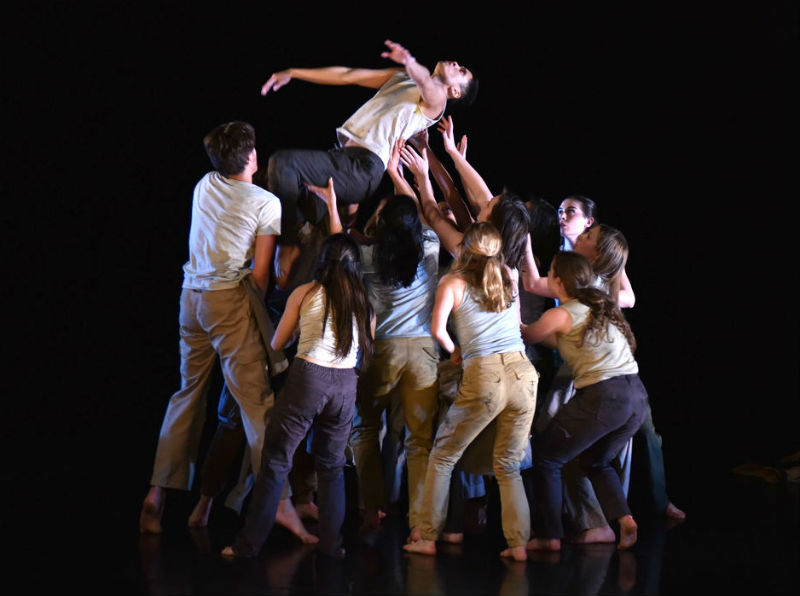 Shannon Gillen's Vox was performed on the first night of U-M's Dancing Globally.

Shannon Gillen, also a guest choreographer, occupied a tough spot on the program following my near-complete seduction by Naharin. In her Vox (2018), the dancers threw themselves into b-boy-inflected floorwork, propulsive lifts, and a lot of running around. Cargo pants and driving electronic music, combined with the curtains pulled back to reveal the technical apparatus of the theater, contributed to an industrial feel.

The second half of the concert featured choreography by Department of Dance faculty Missy Beck and Sandra Torijano. Beck’s Fall(s) (2018) was costumed with butterfly-bright colors by Suzanne Young; they stood out from the evening’s otherwise somber palette. The painted backdrop by Toni Auletti featured a delicate flowering branch reminiscent of a print on a Japanese screen. 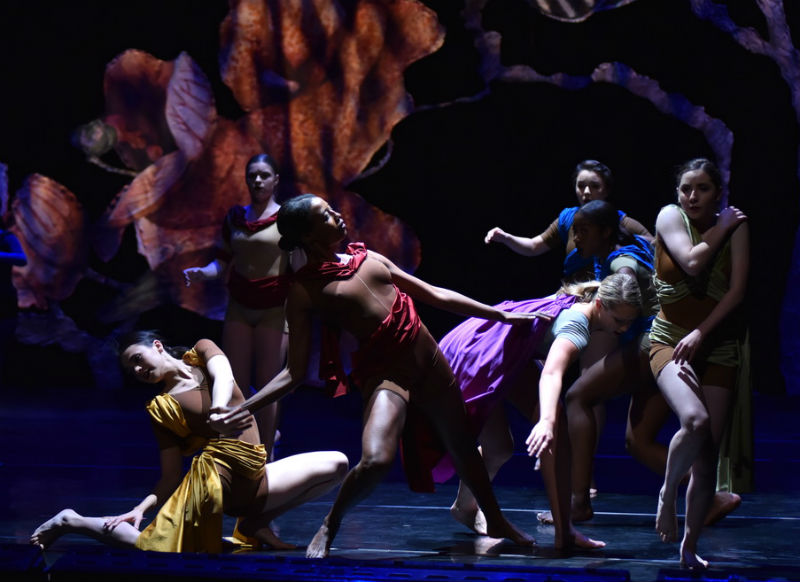 The title promises that the 15 dancers will fall, but they also resist falling. Here and there on one foot, they hovered and wavered and sometimes rose. As if to refute that impression of instability, they also showed off some impressive technical feats -- a duo in perfect unison repeatedly spun and, before the last turn was quite done, pitched headfirst toward the floor, sending a rapier leg up. Cliques of four or five dancers distinguished themselves from the rest, quirky little gaggles who tipped their heads quizzically and clustered together. The piece ended with a different sort of fall: beneath the branch, three dancers bathed in a shower of water dropping from above. 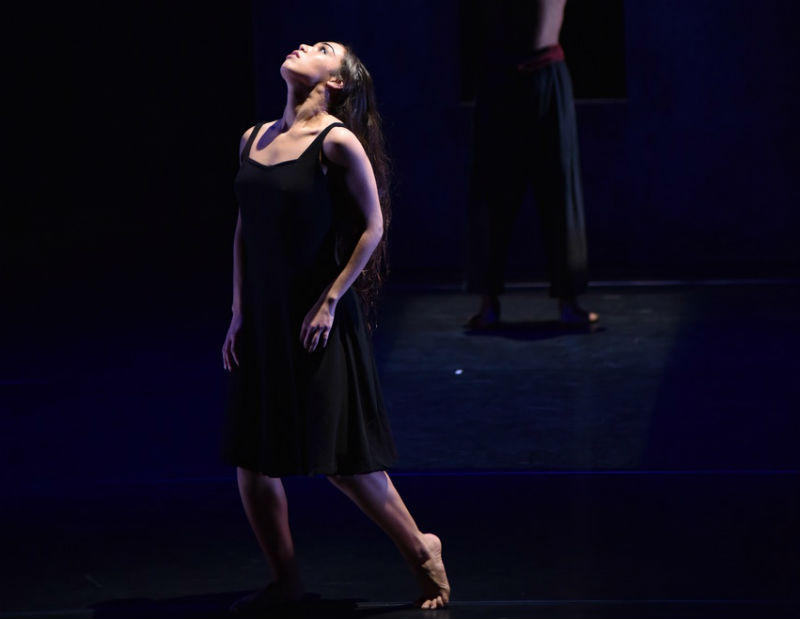 Torijano was the only choreographer to offer extensive program notes with her dance, Minûtus Luminous (2018) -- a tribute to Latin-American poet José León Sánchez and his fortitude through years of imprisonment and torture. There were soloists in the dance, but there were so many that no one emerged as a protagonist stand-in for Sánchez. Likewise, there is no literal prison -- tall, windowed architectural sets by Auletti defined a central confined space, but dancers constantly flowed through it, sometimes meeting partners for a brief interlude of contact. Everything they did was shaded by a pervasive feline tread and by the haunting music coming from Diego Piedra and his musicians in the Power Center orchestra pit.

A university dance performance is a funny mix. It can be tantamount to a professional show; many undergraduate dance majors have trained intensively throughout their high school careers and are already dancing at a very high level, while many faculty members are also notable choreographers. The presence of guests like Gillen and the dancers who set Naharin’s work contributed additional artistic currency to Dancing Globally. Yet at the same time that it’s a polished product, it’s also an educational exercise, an opportunity for young dancers to have the experience of rehearsing and performing for a real audience. It has a pedagogical purpose that rightfully prioritizes process in the service of that product. Fortunately for Ann Arbor audiences, the artistry is more evident than the pedagogy in Dancing Globally.

From 1993-2004, Veronica Dittman Stanich danced in New York and co-produced The Industrial Valley Celebrity Hour in Brooklyn. Now, Ph.D. in hand, she writes about dance and other important matters.