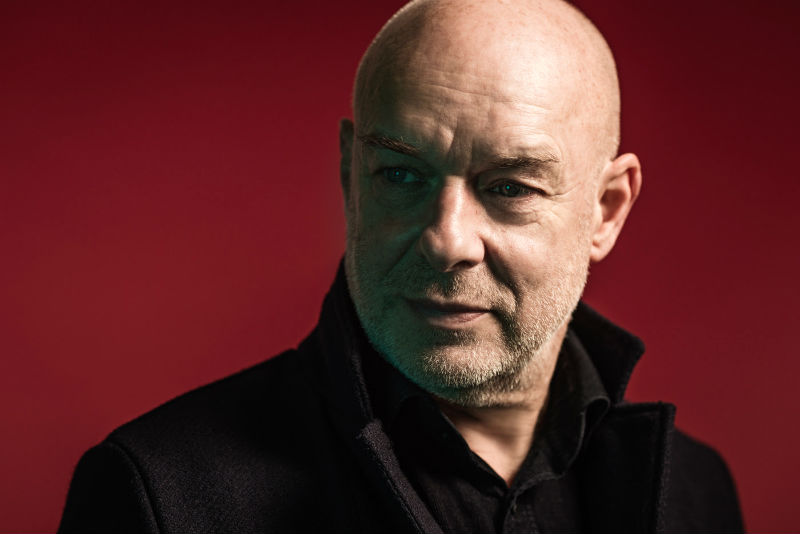 For the past six years, host Michelle Krell Kydd, a self-described “walking smellopedia, olfactress, and scientualist” has been leading people by their noses through a smell spectrum that educates their sniffers.

On Wednesday, Feb. 21, Kydd’s focus was on the polymath Brian Eno, who in addition to creating art, apps, and music is a hardcore smellaholic. Kydd structured the evening around essential oils and one complete perfume that Eno has either mentioned in interviews or is associated with his work with David Bowie. 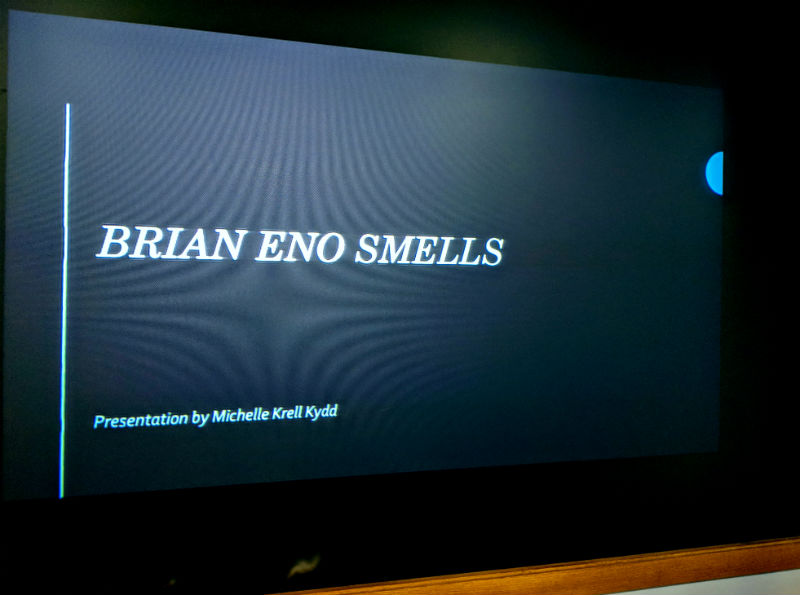 There's probably a perfume that could cover that odor, Bri-Bri: The opening slide at Michelle Krell Kydd's Smell & Tell on Brian Eno.

Eno said in the July 1992 issue of Details magazine that civet “is intensely disagreeable as soon as it is recognizable, but amazingly sexy in subliminal doses.”

As a pioneer of ambient music, Eno revels in the subliminal. But the initial dose of civet on the sampler stick was anything but subdued. One Asian-American attendee said civet “smells like the back alley of a Chinese supermarket.” Others folks called out newly dead leaves, soap bars, an aunt’s sink, leather books, and a yoga mat.

Kydd explained that each element in the chemical makeup of an essential oil has the possibility to bring out these wildly different scent-sations among people. It gives you a firm idea of how scientific the perfume process is, where various oils are combined to create a unique scent, all the elements delicately blending into a newly birthed olfactory perception.

Orris butter was another oil Eno talked about to Details, saying it’s “a complex derivative of root of iris. It smells vaguely floral in small amounts, but almost obscenely fleshy (like the smell beneath a breast) in quantity.”

Perhaps rendered fat from cattle and sheep is an aphrodisiac in some cultures, but none of the scents the attendees attached to orris butter evoked a romp in the sack.

Kydd then demonstrated the Bloom app, which Eno co-created with Peter Chilvers. It features a simple interface when you tap an iPad screen and it produces a circle and a tone, both of which expand and decay. As you add more taps, the notes and colors blend in ever-changing and non-prescriptive ways.

Bloom features various settings, all of which are named after essential oils used in perfumes. As the Musk Ambrette preset helped shape the Bloom sounds, we smelled the oil it was named after.

Musk is a very common component in perfumes, and it originally came from the gland of a musk deer. But chemistry has alleviated the need to kill the animals and the scent can be re-created in a lab. Kydd put up a quote from Eno in 1982 where he told The Complete Music Magazine that “15 or 20 years ago, there's a flower which is a substitute for the very expensive oil that comes from a gland of the musk deer, suddenly this flower spontaneously all over the world stopped smelling. It just stopped smelling.”

Kydd called bullshit. (My notes don’t indicate it, but she might have said that actual word because Kydd’s not afraid to work blue.) Eno’s claim about the flowers losing their scents can’t be found in scientific literature. In addition, men can’t smell musk unless it’s dosed at a low percentage, and Eno likely had a concoction that had the right proportion of oil to solvent if he was detecting a musk molecule at all.

The evening’s sniffers said musk ambrette evoked nuts, salad, freshly mowed lawn, sesame oil, and castor oil -- so, more of an artisanal dish at a vegetarian restaurant than a sexy aroma. (If you couldn’t already tell, Eno goes for the aphrodisiac oils, which Kydd kidded about frequently.)

But even though Eno is mistaken about the musk ambrette plant losing its smell, its influence looms in a bit of a mystery that Kydd thinks she solved while doing research for this talk.

Eno is friends with master French perfumer Maurice Roucel, who even made aphrodisiac for him. But Kydd thinks Eno and Roucel also worked together on a scent that never came out. Interviews indicate Eno was hired by an unnamed perfumery to create a scent, and Kydd put the pieces together to propose it was likely Roucel who he worked with when the perfumer worked for the influential scent house Quest (now Givaudan). But Kydd doesn’t think their collaboration was completely abandoned: She thinks Roucel’s Musc Ravageur perfume grew out of their experiments with animalic ingredients.

Indian tuberose and Brian Eno's 1993 album Neroli both have a seductive ambiance.

Perfume is such an important part of Eno’s aesthetic that he created an album in 1993 called Neroli, which is an oil made from the flower of an orange blossom. For the 2014 reissue, Eno described that album by saying, “I wanted to make a kind of music that existed on the cusp between melody and texture, and whose musical logic was elusive enough to reward attention, but not so strict as to demand it.”

Kydd then substituted “perfume” for “music” and “fragrant logic” for “musical logic,” and the connection between scents and sounds was clear: both are invisible but create sensations in people, sometimes inducing feelings with direct interaction, other times through a more dispersed manner, perhaps floating around a room.

The neroli scent that wafted around the library was described by attendees as being like chicory in freshly mowed grass, balsamic, distilled lime oil, the air high on a cliff, and Tang. None of those scents were likely among the multitude of essential oil vials featured in Neroli’s artwork, but Eno would likely appreciate the diversity of responses.

Nardo was the only Eno-related scent that the library was unable to obtain in time, but it also captured the olfactor’s attention because of sex.

“[A] woman I met in Ibiza gave me a minute bottle containing just one drop of a heavenly material named Nardo,” Eno told Ad Hoc magazine. “l later came to think that this was probably spikenard oil, extracted from a shrub growing at between five and eight thousand feet on the Himalayas, and used by wealthy Indian ladies as a prelude to lovemaking.”

Not exactly true, Kydd said. While nardo is used in Ayurvedic herbal healing in India, it’s not considered an aphrodisiac in Western culture. And spikenard is an entirely different oil, which Eno likely confused with tuberose because the latter is called “nardo” in Spanish and Kydd confirmed it’s a “real seductive scent.” For tuberose, the Smellers/Tellers noted scents of bubblegum, wintergreen, cucumber, spicy sausage, vanilla chai tea, smokey, a burning candy machine, cumin, and milk.

Next was spikenard, which is detailed up above, but I left out one detail. Despite spikenard’s biblical connection to the Son of God and its continued veneration by the Catholic church, Kydd said the “dirty and sweet” scent “smells like a T. Rex song.” She then played “Get It On (Bang a Gong).”

The final scent was the evening’s only full perfume: Warszawa by Puredistance, a luxury scent created by Anton Lie whose tiniest bottle sells for $180. Named after the Bowie song from the Eno-produced 1977 album Low, the Thin White Duke used an olfactory metaphor to describe the song to the Polish magazine Tylko Rock: “In that tune [‘Warszawa’], I wanted to express the feelings of people who yearn to be free, they can smell the scent of freedom ... but they can’t reach it.”

But before we inhaled Warszawa, we watched a funny parody video about how the tune was created. Then, with the song “Warszawa” playing in the background, we sniffed the evening’s finest fragrance. People in the audience called it powdery with hints of mulberries and almond.

For me, it recalled the scent of my first girlfriend, a French exchange student who wore Jardin de Bagatelle by Guerlain. Smell is the strongest sense humans have to transport them immediately into memory holes -- and there I was, standing in a mental ditch with the first lass I ever loved.

The beautiful memory Warszawa's scent conjured was the furthest thing from stinky feet.