A Welcome Return: Theo Katzman at the Blind Pig 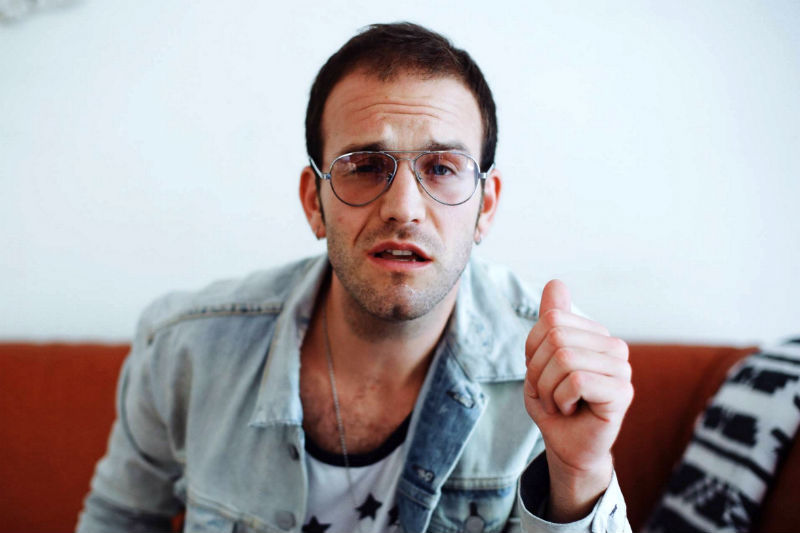 Theo Katzman's show at The Blind Pig sold out weeks before the show date. When I say that people were excited to see Katzman's return to Ann Arbor, I mean it: The line at The Blind Pig was already snaking its way down the block 20 minutes before doors opened.

Theo Katzman studied jazz at the University of Michigan in the early 2000s. Since then Katzman has toured with the band Ella Riot, created the trio Love Massive, and released his first album, Romance Without Finance, in 2011. Katzman is also a prominent member of the funk band Vulfpeck, which has toured with Darren Criss and played on The Late Show with Steven Colbert. In 2017, Katzman debuted his latest album, Heartbreak Hits.

Katzman's no stranger to playing The Blind Pig and fans were happy to have him back. I spoke to one woman who said that she hasn't missed one of Katzman's shows since she got her license in 2012. Once, she saw Katzman play at The Blind Pig and then drove to Chicago the next day to see him again.

And it's no wonder why people love Theo Katzman, his music is beautifully soulful. You can tell that Katzman grew up listening to artists like Donny Hathaway and Sam Cooke, but he puts his own spin on contemporary pop and soul. Many of the songs Katzman plays focus on love and heartbreak. Katzman's first song, "Break Up Together," was one that the crowd knew well and everybody sang along. Katzman got props from the audience for his falsetto, hitting notes that don't seem possible.

I was impressed that in each of the songs the band played, "Crappy Love Song," "Pop Song," "Good to Be Alone," and "Plain Jane Heroine," Katzman showcased the musicians in his band. A favorite of mine is Katzman's piano player who plays soulful comp chords and funky solos. Katzman paused at one point to tell the audience that this band was many years in the making, that it's been one of his dreams to have this group of people playing together on tour. I can see why.

Katzman went solo near the end of the concert, singing a new song that he's been working on. I have never heard The Blind Pig become so quiet. Apparently, this was true for Katzman also; he remarked the same thing after the song. The song was very touching. The lyrics told the story of an ex-lover mourning all the things he will never get to see his partner and her child do. Everyone I spoke to after the event said that they felt they had witnessed something special during that song. The man next to me kept repeating, "This is just real music, you know?" I understood what he meant, not only was the song very mournful and touching, but it was nice to hear it from Katzman who genuinely seemed happy to be back in town. Katzman thanked the crowd multiple times during the show, explaining that selling out The Blind Pig was like a dream for him, someone who had been to so many shows at the Pig. He also mentioned that he knew that many of the audience members were musicians and artists themselves and he encouraged the audience to follow their creative paths.

The show ended with the full band and Bridget Kearney joining Katzman on stage. Kearney, a member of Lake Street Dive who released her first solo album, Won't Let You Down, last year also opened up the concert with a solo set. Kearney has a strong, bluesy voice that evokes Nico with The Velvet Underground, Feist, and St. Vincent, with the whistling skills of Andrew Bird. She had no problem carrying the opening act solo, but it was great to see her turn the energy up a notch with the rest of the band.

I caught up with Katzman after the show and he said that although he won't be coming back to Ann Arbor anytime soon -- he's on a tour that will make stops on the East Coast and then to Europe -- he greatly enjoyed playing here and hopes to be back eventually.