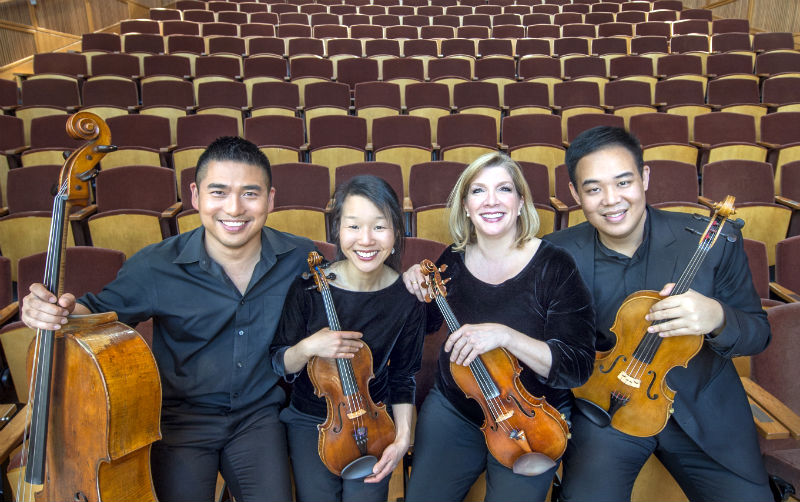 Friday evening the Cavani String Quartet made an appearance at the Kerrytown Concert House, presenting a balanced program of Mozart and Ravel. Playing to a packed house -- following a champagne reception and a brief pre-concert talk -- the four musicians found an enthusiastic audience.

Formed in 1984, the Cavani Quartet has been hailed for its artistic excellence and been the recipient of numerous awards, but the group has also shown a strong commitment to music education. Throughout the years, Cavani has been an ensemble-in-residence at various festivals and universities, and since 1988 has been the quartet-in-residence at the Cleveland Institute of Music, one of the preeminent conservatories in the Midwest. Cavani's appearance in Kerrytown on Friday, May 25 was part of another such residency, as the musicians are the artists-in-residence at this year’s PhoenixPhest, a chamber music educational festival run by the Phoenix Ensemble. One of the organizers of the festival moderated the pre-concert talk.

“So, why aren’t you engineers or something?” he opened, to general chuckles. “Why did you chose to do music professionally?” Despite the levity of tone in which it was asked, it’s a question that strikes at the heart of the professional musician experience, and for a few moments it seemed as if nobody was particularly eager to respond. But then cellist Si-Yan Darren Li broke the ice, expressing a feeling that probably isn’t foreign to musicians at large: “I can’t live without it.” An affirmational “Hear! Hear!” came from the direction of the audience. Other members of the quartet echoed the sentiment, and a short time later the love the musicians felt for music came through in the sensitivity of their performance.

Cavani opened the concert with a work of the classical period, Wolfgang Amadeus Mozart’s “String Quartet No. 14 in G Major,” K. 387. Nicknamed the “spring” quartet, it was an apt programming choice for Ann Arbor in full bloom. The first of six quartets dedicated to Joseph Haydn -- the composer credited with inventing the genre -- K. 387 is a charming piece full of energy. At some moments grand and at others playful, the work displays all of Mozart’s characteristic humor and drama. In the words of violinist Annie Fullard, “It’s opera through and through.”

The Cavani Quartet played it well, demonstrating a remarkable control and artistry throughout. The first and last movement, in particular, stood out as compelling, though throughout certain minutiae were left to be desired. The first movement features alternating passages of diatonic and chromatic music; in the chromatic passages (which were generally at a lower volume), the music could have benefited from an even greater decrease in sound, so as to heighten the feeling of suspense or anticipation. I found this excess of volume to be a minor issue throughout the concert, though this may be due to the small size of the venue. Regardless, the Quartet’s performance of the piece was thoroughly enjoyable.

The second movement -- an elegant minuet that Mozart, unconventionally, places here rather than as the third movement -- displayed fine artistic attention to flow, with the players pulling the music back and moving it forward at all the right places. The darker third movement contrasted with this nicely, and the ensemble maintained a fine balance between themselves. As in the first movement, the problem of too much volume surfaced (similarly in a passage of quiet, ascending chromatic lines), but compared to the satisfaction provided by the movement as a whole, this was negligible. The fourth and final movement was thrilling, with each member of the Quartet at various points playing dramatic, fast scalar runs (which, to my ear at least, seemed to be quite challenging, though they managed them without much apparent effort). The movement relies heavily on imitation, with the instruments coping each other in a quasi-fugal fashion that is reminiscent of the famous finale from Mozart’s last symphony, nicknamed “Jupiter.” By the end of the piece, the listener feels that they have earned a grand final gesture, and when Mozart pulls a fake-out ending -- first giving the dramatic cadence we expect and then tagging on a quiet and humorous postscript -- you feel cheated for a moment before becoming amused, an effect the Cavani Quartet pulled off with charm.

After a brief break the ensemble returned for the second half of the concert, in which they played one of the most enduring and beloved pieces in the string quartet repertoire, Maurice Ravel’s “String Quartet in F Major,” the only work the composer produced in the genre. After giving a brief background of the piece -- how it caused a minor scandal when it failed to win the Prix de Rome, how it was influenced by the music of Asia and by Debussy’s quartet -- the musicians began the idyllic and lyrical opening movement. Cavani handled the quartet with a care that can only be termed love, but nevertheless, perhaps because of the great familiarity of the quartet, occasionally things didn’t leave as favorable an impression as they might have. Chief among these had to do with the transitions between sections of the movement: At the close of each section and beginning of the next, the Quartet would take a moment -- just a nanosecond, really -- to get their bearings. This pause, however small it was, allowed much of the music’s energy to dissipate in a way that took away from the supple nature of the piece, the way that one thing blends naturally into the next. These quibbles are minor, however, when seen in light of the fact that the performance overall was compelling and vibrant, with particular interest generated from the way Cavani handled the inner voices.

The second movement, as always, was a delight to hear, with Cavani imparting the opening pizzicato notes with an infectious sense of joy. As the movement progressed, the energy transformed wonderfully into the expressive lyricism of the “Lent” section, the muted cello playing beautifully in its high register. The third movement, as well, was compelling, with the wonderful timbre produced by the viola, in particular, drawing my attention. The concluding movement of the quartet was perhaps the best, however -- following the ferocious opening, the musicians managed to elegantly direct the flow back into slower and lyrical passages, rising and falling in a natural manner. As the movement progressed and once again picked up steam, the players generated a driving sense of momentum, which propelled the music forward to an end that was thrilling.

All in all, the arch of the performance was superb, and the audience responded with proper enthusiasm at the finish. I’m certain most of them would agree that one can hope Cavani returns to Ann Arbor sooner rather than later.

Dayton Hare is the Senior Arts Editor at The Michigan Daily and is working on his BM in music composition and BA in honors English.