From India With Love: The second Rasa Festival closes this weekend with a multi-arts showcase 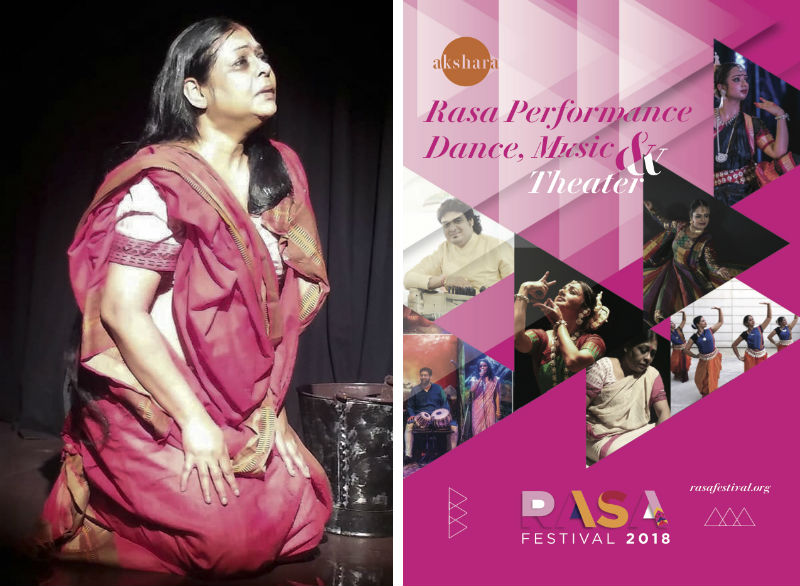 The annual Rasa Festival is a unique India-themed multi-arts festival in Ann Arbor and Ypsilanti, produced by our multi-arts organization, Akshara which I co-founded a few years ago. Now in its second year, I conceived of and started this festival in 2017 as an exciting month-long celebration of the arts in the Ann Arbor and Ypsilanti areas. The Rasa Festival features the arts, from and inspired by the rich cultural heritage of India. Partnering with local arts organizations, it presents several unique and exciting, traditional and innovative programs in performing, visual, literary, films, wellness, and culinary arts.

I feel that more than ever before, it is important for our communities to discover, appreciate, and embrace the richness of cultural diversity, and for us to open ourselves to influences from all over the world. The arts offer a beautiful window to experience and rejoice in the richness of cultures, both far and near.

On Friday, October 5 and Saturday, October 6, the Rasa Festival will conclude the 2018 programming with a grand performing arts event at Washtenaw Community College's Towsley Auditorium in Ypsilanti. This year’s performing arts offering is exciting because it includes dance, music, and theater. In curating the two-day program, I wanted to bring a range of art forms and artists from India and other parts of the US as well as from Michigan.

I believe that we have succeeded in creating a compelling program that will offer a fantastic window into the arts from India, not merely the ones that reflect the ancient traditions and what appears as exotic in the West, but also contemporary arts that respond to current global situations in a thoughtful manner. The weekend will showcase an extraordinary range of creative expression.

On both evenings, the program will start with an invocatory dance by the Akshara ensemble as a way to welcome the audience and mark an auspicious beginning to the evenings. On Friday, October 5, Anurekha Ghosh, a well-known classical Kathak dancer from India, will present her solo performance. Titled Miniatures, which in her own words is “is a beautifully intimate crafting of dance, exploring the classical roots of Kathak in this solo program, focusing on precise footwork, rapid turns, complex rhythms, and poignant mime and gesture.”

This will be followed by A Taste of Tagore, a dramatic presentation by MILITS, Ann Arbor. Based on poet Rabindranath Tagore’s vast literary works, many of whose writings were considered as some of the most feminist ones of his time, A Taste of Tagore is about three of Tagore’s female characters. 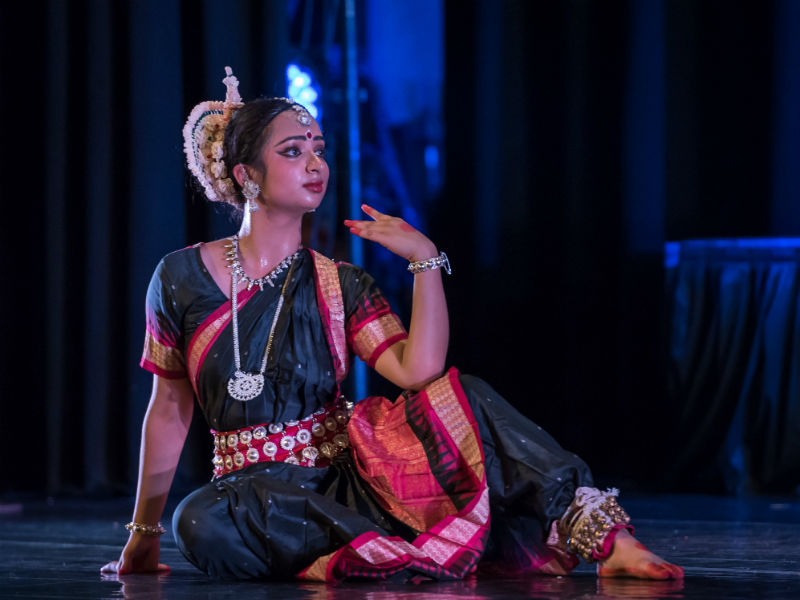 Kritika Rajan (shown above) is a talented emerging solo classical dancer in the Odissi style. Having trained and performed Odissi extensively since her childhood, she represents the new generation of Indian-American dancers, embracing the best of her American and Indian heritage and roots. She will perform a traditional, dynamic Odissi piece titled Kali Krishna: Two Sides of Darkness, juxtaposing and merging two iconic and contrasting dark divinities: the fierce all-powerful Goddess Kali and the charismatic, enchanting God Krishna.

The final segment on Friday is a classical music concert by renowned artists from India and Minnesota. Pankaj Mishra, an artist born into an exceptional musical family, will play the sarangi, a rare and ancient bow instrument. On vocals will be Dr. Pooja Goswami Pavan, whose versatile repertoire is evident in her ability to sing Thumri, Dadra, Ghazal, Bhajan, Sufi, and various other genres such as the Hori, Chaiti, and Kajri besides the Khayal. Abhishek Basu’s tabla performances are marked by masterful improvisational dexterity, grounded in formidable knowledge and study. Abhishek has already released 10 internationally marketed albums. 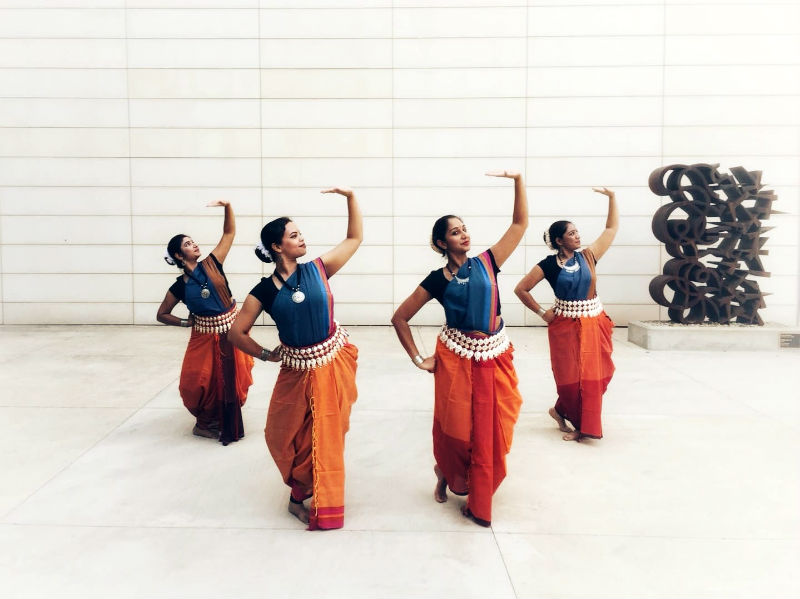 Saturday’s program will commence with the new dance production Sambhuti by my Ann Arbor-based Akshara ensemble (shown above). I have choreographed this five-dancer innovative piece in the classical Odissi style. It is an exploration of some of the most profound philosophical concepts from the ancient Indian scriptures, the Vedas and Upanishads. I have used techniques of Odissi, along with other movements such as the martial arts form of Chhau, classical and new music, and Vedic chanting. The narrative for this performance focuses on the concepts of creation, the five elements (panchabhuta), and moksha (liberation of the soul). Sambhuti is a dynamic and moving new performance of striking beauty and will be danced by Kritika Rajan, Soumi Ghosh, Sampurna Datta, Shruti Paranjape, and Ayishwariya Premanathan. The Akshara ensemble is one of the most highly regarded Odissi dance companies in the U.S. and tours all over the country and India for acclaimed performances.

The next presentation will be East Side Stories, a one-woman solo theater piece by Sanchayita Bhattacharjee, directed by Mahmud Alam. This is a renowned actor-director team from Kolkata, India. This powerful solo theater piece performance looks at the Indian partition and how it has shaped the narrative of the two regions of Bengal, which not only share a language but also a common cultural heritage. The events and stories of those times are seen through the eyes of a contemporary woman. As the stories are retold, we find contradictions in our acquired sense of nationalism and development. We become aware of our changing values, the limitations of memories as well as of political borders. This is a contemporary work from India that is extremely relevant today and here in our country. 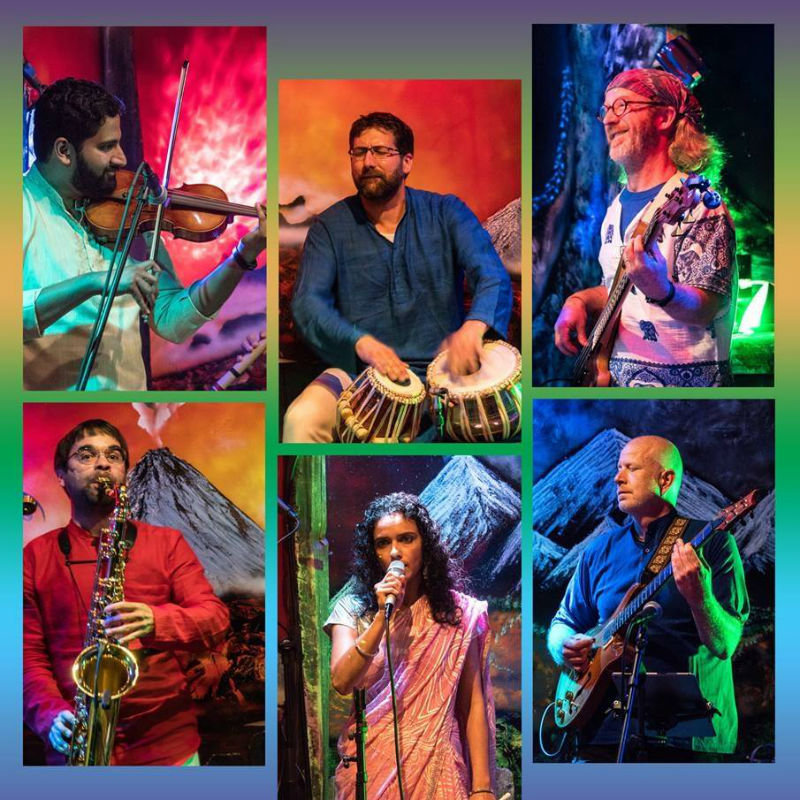 As the concluding segment of the evening, we will have a grand music concert by Ann Arbor music group Sumkali (shown above), who will be joined by tabla master Pandit Samar Saha from India for an exclusive performance at the Rasa Festival. This concert will feature music from Sumkali’s large repertoire of folk, fusion, and jazz and will include music from their latest album release, Dha Re Dha, which prominently features Pandit Samar Saha’s unique and masterful improvisation. Sumkali is a diverse music group made up of members from North and South India and the American Midwest. (Read the Pulp feature on Sumkali here.) Pandit Samar Saha is regarded as one of the world’s great masters in the art of tabla drumming. He has performed worldwide for over four decades with the top names in Indian Classical music, including Pandit Ravi Shankar and Pandit Hariprasad Chaurasia, and he has graced the world’s greatest stages, including Carnegie Hall, The Royal Albert Hall, and countless others. He is truly a living legend in the world of tabla players.

A unique feature of this weekend of performances will be the music, dance, and theater experts who will share insights into the performances that will be presented. University of Michigan professors Sam Mukherji (School of Music), Emily Wilcox (Dance, Asian Languages and Cultures), and Inderjit Kaur (School of Music) will speak briefly to provide background to Indian performing arts, helping the audiences to connect with these complex art forms.

Sreyashi Dey is a well-known Ann Arbor-based Indian classical Odissi dancer and the founder of Akshara, a multi-arts organization that produces the annual Rasa Festival.