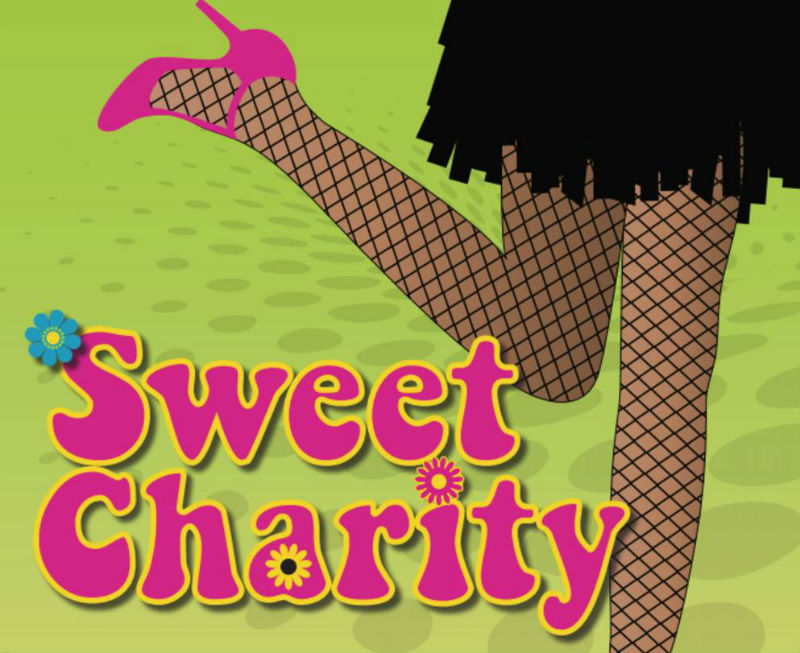 You don’t have to be a big spender to enjoy the University of Michigan’s engaging, dance-happy return to the 1960s, Sweet Charity.

Sweet Charity is a lighter, thinner adaptation of Federico Fellini’s film Nights of Cabiria. The Neil Simon book changes the prostitutes of Rome into New York City taxi dancers at the Fandango Dance Hall. And the story is a mere pretext for the often-exhilarating dance numbers and clever songs.

With music by Cy Coleman and lyrics by Dorothy Fields, Sweet Charity is always on the move from the minute that Nevada Koenig struts on stage as the ever hopeful and usually disappointed Charity Hope Valentine. This is a musical about frustrated romance, but it’s also a musical about dance and movement.

Charity is a glass-half-full kind of person, even after being dumped yet again, and this time into the Central Park lake. She and her fellow dancers-for-pay girls yearn to get out of the Fandango and into a better life.

Koenig leads the way as Charity, a tough, street-smart girl with a touch of the innocent dreamer. Koenig finds that sweet contradictory spot and takes the audience along on Charity’s never-ending quest for “the normal life” and “true love.” Her comic timing is spot-on and her singing is appropriately brassy and bright. And she gets to strut through several dance numbers with style.

Life at the Fandango is captured perfectly in the song “Big Spender.” The dancers in their tight, sexy dresses drape themselves over a railing and entice the customers to “spend a little time” with them. The combination of desperation and contempt for the customers is both funny and sad, and each of these fine young actresses creates a vivid individual. This is a #MeToo song long before the movement.

Charity shares her feelings with her roommates and fellow dancers Helene and Nickie, who both console and needle their wide-eyed friend. McKenzie Kurtz plays the tough-talking Nickie with a crackling New York accent and a wide, expressive mouth. Mikaela Secada gives Helene a bit warmer personality though still New York tough. They join Charity in musing that “There’s Gotta Be Something Better Than This” and later Nickie and Helene put several pins in that idea with “Baby Dream Your Dreams.”

Charity thinks she’s found love again in the guise of an arrogant Italian movie star Vittorio Vidal, who is having a spate with his latest girlfriend and turns his attention to the lowly Charity. He wines and dines her and she marvels how grand it would be “If My Friends Could See Me Now.”

At an upscale nightclub, the dancers are in the groove with “Rich Man’s Frug,” the first of the big dance numbers and a real showstopper. Choreographer Linda Goodrich has her dancers put on a dazzling display of variations on the frug and other early '60s dance moves, combined with the more traditional Broadway dance. Later the dancers will evoke the later '60s hippie movement in the equally energetic “Rhythm of Life,” led by Commodore Primous as the flamboyant con-man preacher Daddy Brubeck.  Primous has a wonderful leer as he sings joyfully, drawing the suckers into his new-age religion. The original Broadway choreography was by the legendary Bob Fosse and the show opened in 1966, a halfway point between the dance crazes and the hippies. The audience would have been hip to both scenes.

Blake Bojewski hams it up with a broad Italian accent and gestures as Vittorio but then surprises with a strong singing voice on “Too Many Tomorrows.”

Charity finally thinks she’s found love in a stuck elevator with the claustrophobic Oscar. Lake Wilburn makes the most of Oscar’s panic attack and nicely plays the naive Oscar as just the guy for Charity, or not.

Charity’s story is funny and sweet but the show’s real draw is those big dance numbers, which also include “I’m a Brass Band” (featuring Koenig) and “I Love to Cry at Weddings.” Goodrich and director Mark Madama bring up the energy for these dance routines and the cast seems to be enjoying it as much as the audience.

This show was wonderful! I…

This show was wonderful! I am continuously amazed at the talent of the students from the Department of Musical theater (and Dance). But this was the best yet. Shades of Bob Fosse, well done Goodrich!