All the World's a Stage: Madeleine Albright at The Michigan Theater 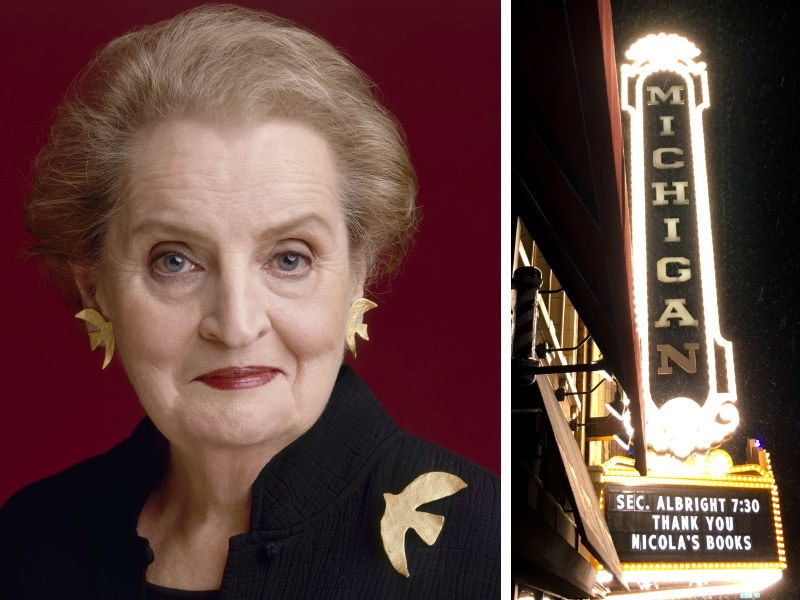 “I’m an optimist who worries a lot.” --Secretary Madeleine Albright

I almost didn’t go. I was a grump that evening. It was cold, and I didn’t want to go outside and I had a series of other minor complaints competing for space in my head. But it feels very weird to skip a talk on fascism in order to wallow in a personal pool of whininess.

The theater took extra care with security that evening so for those of us at the back of the line, closer to Division St. than the Michigan Theater, it took a while to get out of the cold. By the time I made it into the theater, Secretary Albright was already into her conversation with University of Michigan professor Juan Cole.

I sat down just in time to hear Albright argue that fascist leaders capitalize on fear, use the media, don’t respect institutions, and are full of simple solutions for issues that actually require complex approaches and attention to nuance. Punctuated by bursts of applause, she continued, stating that according to her definition, North Korea’s Kim Jong-Un is currently the only leader who fits that description. However, many others have certain fascist tendencies.

“It’s a bully with an army.” --Secretary Madeleine Albright

It’s tempting to spend too much time describing how comfortable Albright was on the stage; it’s also lazy. Doing one’s job in front of the world as a president’s chief foreign relations ambassador would prepare you to be constantly observed. Experienced on the world stage, a theater is probably child’s play. Besides, it is Albright 's sense of humor that intrigued me; it compelled me to follow her on Twitter. I want those slices of insight in my life, or at least my Twitter feed.

In her description of fascist regimes, Albright argued that a minority group becomes a scapegoat and she spoke of the ways refugees and immigrants have fallen into that function, taking care to differentiate between the two groups. She then owned that this is personal to her, painting a picture of herself as a young girl, daughter of a diplomat. She is a refugee from Czechoslovakia who was naturalized between her sophomore and junior year at Wellesley College.

It can be a challenge to imagine the extremely accomplished as a young person. I looked at the 81-year-old in front of me and realized that I’ve imagined none of her life.

Albright told the tale about how she started to use her pins as communication, sharing a story of having worn a serpent pin in response to a poem called “To Madeleine Albright, Without Greetings” that was published by the government-controlled Iraqi press during Saddam Hussein’s presidency. I wonder if that is the diplomatic version of seeing something rude written about you on a bathroom wall? I also wonder what it feels like to sit down to write a book about fascism.

“My whole life is an accident and totally crazy in a lot of ways.” --Secretary Madeleine Albright

As Albright spoke of current affairs and how they related to her book’s topic, the frequent explosions of applause continued as she delivered lines like, “Americans don’t like the word multilateralism. It has too many syllables and ends with an ism," and “We are a great country … already.” She almost had to wrestle the applause. I wondered about the line between reverence and respect. How can you hear if you’re making noise? I wonder if that question is a fundamental one for a diplomat. As she deftly bobbed and weaved among a variety of topics, I wondered just how much information one brain could hold.

I loved that of the audience questions was whether Albright watches the show Madam Secretary. She took off into her television history, which involves playing herself on Gilmore Girls and on Parks and Recreation. I discovered that her description was quite modest. A cursory glance at her page on IMDB.com tells us that she has appeared in over 80 shows as herself. For Madam Secretary, Téa Leoni, consulted with Albright, asking her what being secretary of state was like in addition to asking her to be in the show. Here, she bragged about getting in an unscripted line about a former secretary of state consulting her predecessors: “We used to do that all of the time.”

When asked about the pins she wears and where she finds them,  Albright went into the origin story and revealed that she realized how much joy collecting pins brings her: “This is fun.”

In addition to the work that she put into building her career and the time she spent putting in the work, perhaps this joie de vivre is a secret of her success.