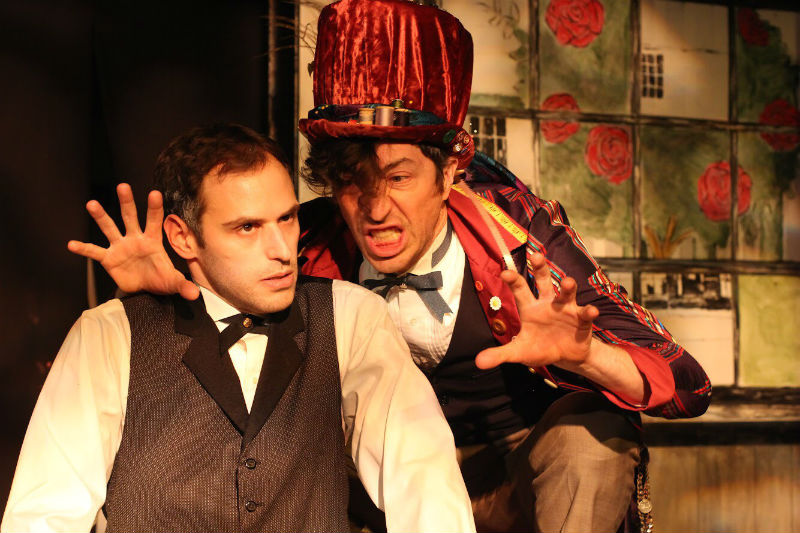 Into this mutual isolation comes Alice (Allyson Miko), fresh from an engagement proposal from none other than Prince Leopold, youngest son of Queen Victoria. Uncertain about taking her first steps into adulthood, Alice has sought the advice of her two friends, Carter and Dodgson, who are hardly acting like adults themselves. Mad As a Hatter explores the potential repercussions of unexpected and overwhelming fame on these three characters who were also very real people.

Miller is astounding in his very different dual roles. The Hatter is whimsical, colorfully dressed, climbing on tables, pulling tea cups from all nooks and crannies, and spouting his usual nonsense. Dodgson, on the other hand, is not only sedate and speaks with a slight stutter, he is almost dour at times as he at first rebuffs Alice’s attempts to reconnect with him. Schwartz’s occasionally frenetic portrayal of Carter shows a man nearing the end of his rope, and Miko is a charming Alice, a young woman whom the public would keep a child forever, but is transforming inevitably into an adult.

This world premiere story ultimately shows that in growth, there doesn't need to be loss. Growing up isn’t abandoning all that we were. And sometimes good friends can help us remember that.

“Mad As A Hatter” continues at the Ypsi Experimental Space (YES), 8 N. Washington St., Ypsilanti, at 7:30 pm on Thursdays, 8 pm Fridays and Saturdays, and 2 pm on Sundays through April 20. For tickets, visit roustabouttheatre.com.