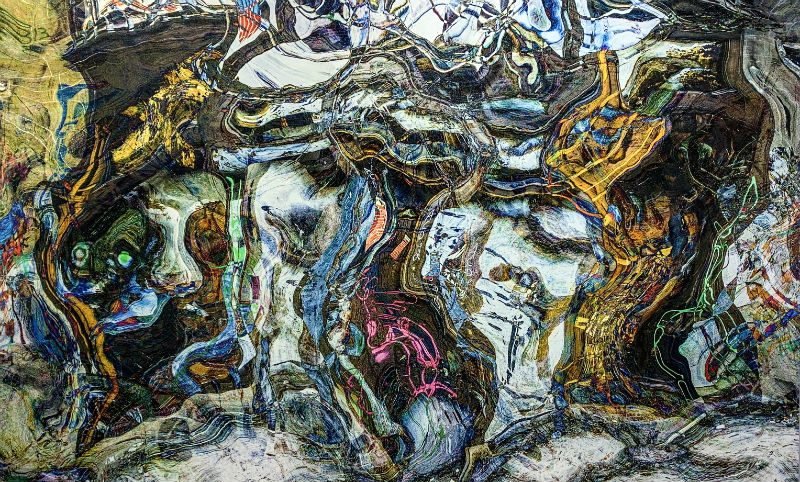 Aaron Dworkin's Fractured History exhibition is art in the key of life. His 11 artworks in the Ann Arbor Art Center’s entry-level gallery gives us a revealing glimpse of this authentic Michigan institution as well as his view of the world around us.

It would be a step too far to say the display is autobiographical. Dworkin is a bit too cagey to be revealed in his art, but his choice of themes and topics in Fractured History compensate for the otherwise lack of biographical detail.

After all, this a man who has already had enough rarefied experiences to fill a handful of lifetimes.

An Honors graduate of the University of Michigan School of Music with a Bachelor’s degree (1997) and Master’s degree (1998) in Violin Performance, Dworkin followed this work by founding Detroit’s Sphinx Organization (dedicated to the development of young classical musicians of color) as a successful endeavor to increase minority participation in American symphony orchestras.

He then was honored with one of the most prestigious American awards: a 2005 MacArthur Fellows Program Award -- the so-called “genius grant” -- for his work as an educator, which was followed by President Barak Obama’s first appointment to the National Council on the Arts and Michigan Governor Rick Snyder’s appointment to the Michigan Council for Arts and Cultural Affairs. These accolades were then followed by a recent period as the Dean of U-M’s School of Music, Theatre and Dance, as well as a tenured U-M professorship in arts leadership.

Dworkin now turns his attention to the visual arts after forays as a writer and editor. And it’s perhaps telling that his manner of art is in digital printmaking with largely an emphasis on visual musicality, as both the aesthetics of art and music are highly technical creativities that require dexterity and a thorough-going mastery.

As Dworkin says in his artist’s statement to this exhibit, “My path in life as a social entrepreneur, author, artist, and professor originated in music. I am a classically trained violinist, and throughout my journey, my art has depicted as well as been influenced by and expressed through that lens:

My mixed-media work with physical musical instruments shares stories of birth, separation, life, friendship, and love. I work with stringed instruments, highlighting their individual parts as elements of human emotion and character, from bow hair embracing a tailpiece, violin pegs dissecting the wood beneath the chinrest and using colors to capture the significance of certain life events.

My digital explorations incorporate the theme of musical instruments and warp the process into an alternate dimension of history, with the aim of bringing to light important historical figures of color. I endeavor to have my art utilize the imagery of music to evoke their significance while combining various techniques to convey a "fractured" effect.

Frankly, I don’t believe I’ve read an artist’s statement that was so articulate that it could substitute for an entire art review. But Dworkin’s understanding of what he’s doing is second only to the art he’s produced as a reflection of this philosophy. It’s obvious a facetious observation, but it’s difficult to determine what came first: the art or the explanation.

Be that as it may, there are two kinds of art on display in Fractured History: A representational portraiture that reflects the themes of art, music, and society as well an abstracted art that’s … ahem, indeed gesturally fractured. 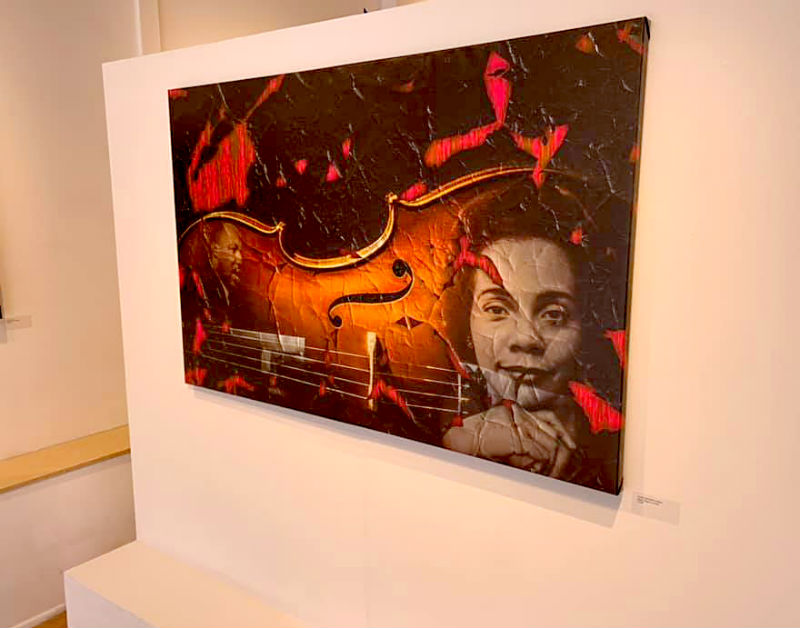 Dworkin's representational art -- of which Coretta and Martin’s History is a prime example -- finds him working within his artistic and intellectual comfort zone. A multi-layered digital collage on canvas of impressive size -- 12.5 foot by 8 foot -- with portraits of Coretta King and Reverend Martin Luther King Jr. overlaid on the upper and lower bout of a violin lying horizontally on the work’s surface, the print also features an irregular veneer of overlaid striated brown and pink diagonal gesticulation.

If any work of art could justifiably be called handsome, this one would surely fit the bill. Dworkin mingles a variety of sophisticated techniques in the print and he balances the whole in such a manner as to draw attention to each element of the work while also dazzling the eye with its overall intent. Coretta and Martin’s History is a prime example of biography as art history.

His equally oversized Diana’s Trumpet works in a similar manner although its nuance is monochromatic. This digital collage on canvas features the portrait of Diana Ross nestled in the bell of a receding trumpet. Dworkin ties together his personal interests as well as his interests in history and musicology with this jazz-inflected portrayal of one of the most gifted 20th-century singers to hail from Michigan.

But the real find in this display is an oversized abstraction titled Train Station. Dworkin’s work might have a touch of that musical swing, but he’s jettisoned the mooring that ties his representational work to an objective theme because #Train Station# is most clearly its own thing.

On one level, Dworkin is obviously letting loose with his digital medium -- wildly chromatic and all. Yet far more significantly, he’s channeling a gesture that goes back to the automatic drawing of mid-20th century French draughtsman André Masson. For like this surrealist master -- although, admittedly, with a far more energetic touch -- Train Station finds Dworkin breaking through layers of subconscious expression with only tantalizing hints of objectivity slipping in and out of its jet-stream.

It appears this gesture is where Dworkin’s likely headed, presuming he intends to continue with his visual explorations. Because as laudable as his other artworks are as social and historical references, Train Station is most clearly an artful innovation. Following this path will require Dworkin to single-mindedly dedicate himself to plumb its subterranean depths through a variety of art forms. And the results could be spectacular if Train Station is any indication.