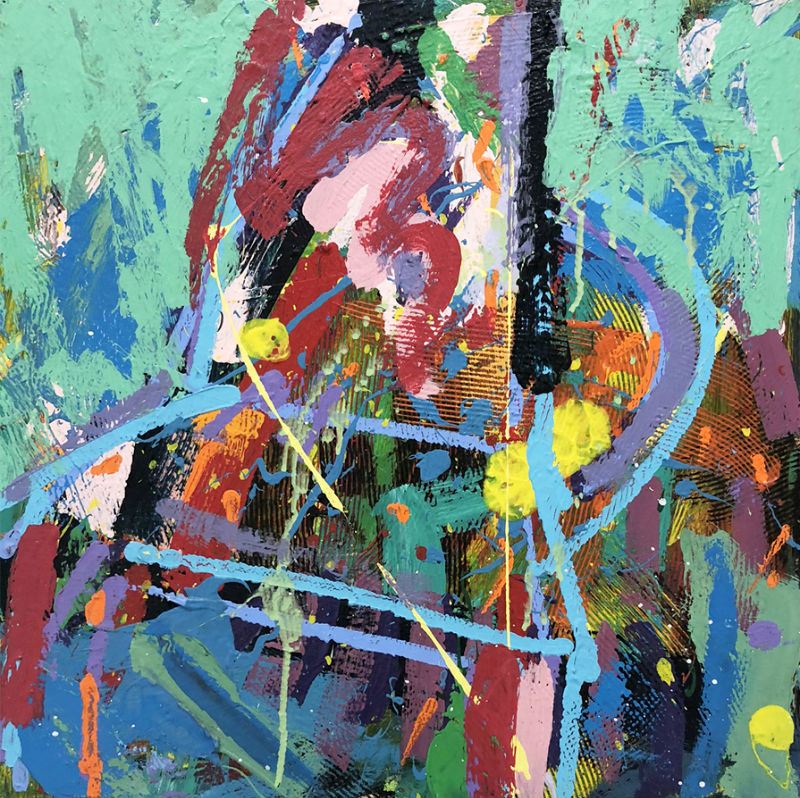 I will never meet Gilda Snowden.

I missed my chance when she died suddenly of heart failure on September 9, 2014, just as I was beginning to be dimly aware of her importance as an artist, an archivist of Detroit’s art scene, and a mentor to many of its young creatives. She left a large body of work behind, thousands of paintings and drawings, a few of which are currently on view at Bold & Beautiful at the University of Michigan’s Connections Gallery.

Snowden’s early work features bits and pieces from her collecting activities, collaged onto the surfaces of her paintings as opening gambits for her painting practice.  She credited the influence of her Cass corridor mentors, who also worked in unconventional materials:  leather, chainsaws, shotguns, barbed wire, and the like.  By the time she produced the artworks represented in this exhibit, however, she had left those strategies behind for the more esoteric and protean qualities of pure paint.

While her paintings are essentially abstract, there are figurative references throughout Snowden's work. Four smallish paintings from her fauvist Chair Series (the most uniformly successful in the exhibit, to my mind), illustrate how she employs a simple shape as a scaffolding upon which she constructs the picture.  In Chair 6, she loosely paints cerulean blue lines, which don’t precisely meet, providing a compositional structure. Swaths of turquoise color flank the central image and lend energy to an already vigorous line.  She deftly applies color around and over the underlying frame, until the layers cohere into a satisfying whole. The pictorial space is shallow, while the blue lines seem to hover in front of the picture plane.  Adjacent on the gallery wall, Chair 4 finds Snowden engaged in a slightly different but related strategy.  Three strong slashes of thick burgundy anchor the composition and are surrounded by vibrant pinks, lavenders and grassy greens in a narrow, medium value range, which preserves the maximal intensity of her hues. The resulting pictures pulse with energy, simultaneously coalescing while threatening to fly apart. 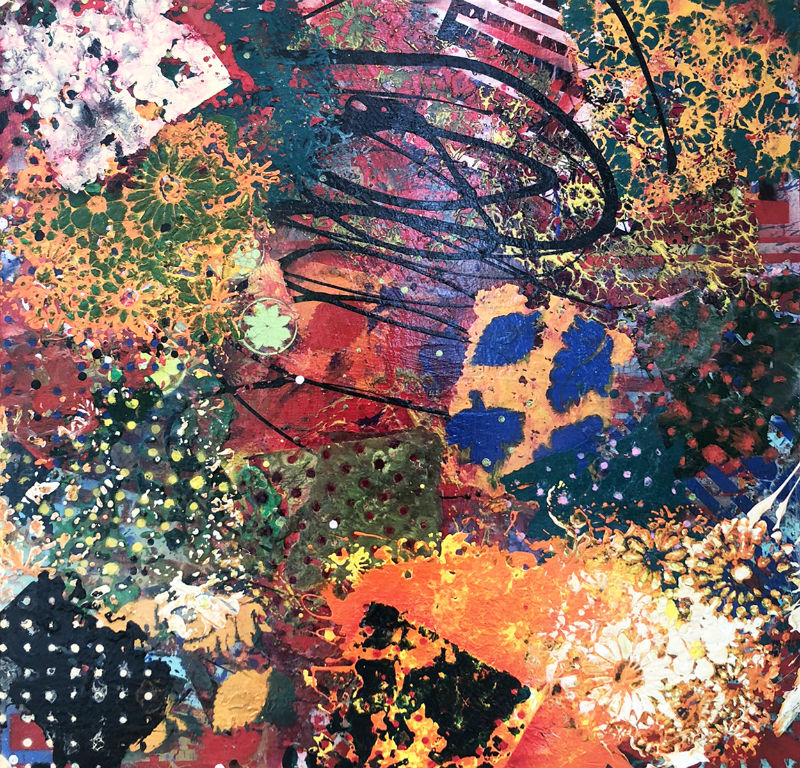 The largest painting in Bold and Beautiful is an awkward canvas called Herald.  It represents an image, which Snowden described as a recurring dream, of an approaching storm. She paints a funnel-shaped cloud suspended over thick, chaotic brushwork in the lower third of the panel.  Herald and a smaller piece, Tornado,  are painted in oil, a medium in which Snowden seems ill-at-ease. The surfaces lack the luscious color and vitality of the other works in the show, but perhaps that’s appropriate to the threatening mood of the two pieces.

The four paintings from Snowden’s iconic cycle Flora Urbana round out the diverse sampling of artworks in Bold and Beautiful. Snowden is in full pursuit of her goal, to make paintings that, she says, are “layered, gritty, grungy, beautiful.”  The series features layered veils of abstract floral forms inspired by the urban gardens tended by Detroit citizens, on plots where buildings once stood. This is a subject that she painted frequently from 2008, when she first exhibited paintings at the Sherry Washington Gallery, until her death in 2014.  The paintings combine lush vegetal forms with elements from the grubby built environment of Detroit. The artworks appear to have grown organically, rather than having been painted on the canvas. She applies paint on the flat, allowing it to pool in loose patterns. Some elements are created by spray paint on mass-produced floral stencils, which she then flips over and repositions to get their negative images.  She mixes colors on the picture; they bleed and run. As in the chair paintings, the images and gestures often appear to float in front of the picture plane. 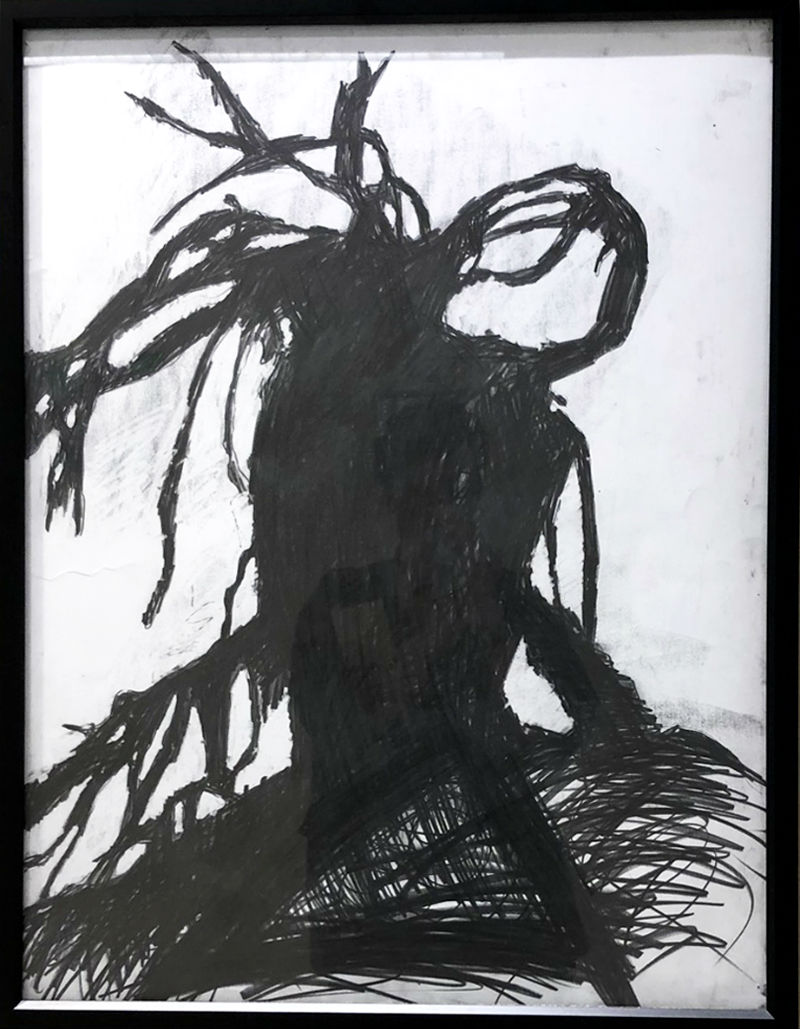 The four Flora Urbana pieces in the Connections Gallery were painted during the year or two before her death, and show an artist at ease with her talent, experimenting with new methods, exploring the possibilities of paint and personal expression. One wonders how her art practice would have unfolded if she had been allowed a longer life.

As I left the gallery, I was confronted by Snowden’s mysterious self-portrait, one of over a hundred that she painted over time.  It is both energetic and enigmatic, and the artist seems to be both approaching and retreating.  Dreads surround her head in an untidy halo, but her face is invisible, and I feel her absence as she passes into art history.

"Bold and Beautiful" is on view at the North Campus Research Center until August 24.  For more information go here.