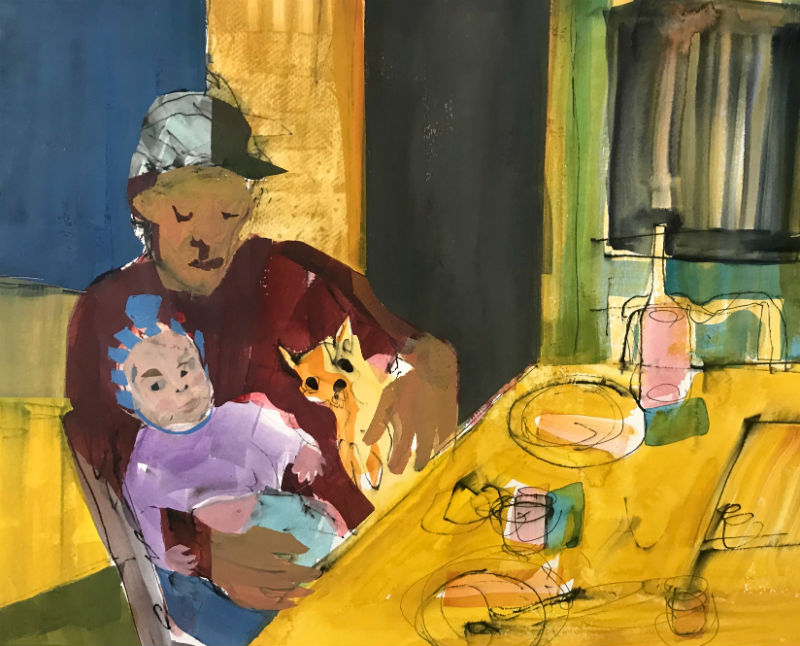 Innes’ art practice consists of constant, almost compulsive sketching of the details of her domestic life. As her friends and family sit around the table, she records what is said (sometimes with text, sometimes by implication), what’s for dinner, who is there and who is absent. These small sketches form the basis for her voluminous body of small works on paper and larger paintings.

In the studio, Innes reproduces elements of these quick sketches in water media.  She uses stencils -- a technique called pochoir -- to anchor the compositions, intuitively adding color and detail as she sees fit.  The spontaneity and lightness of the images depend upon her intentional misregistrations of the formal elements, leaving white space between figures and objects on the table.

Two pen-and-marker sketches at the entrance to the gallery represent Innes’ initial steps in the process of recording her domestic life. They are quick and loose, but quite detailed and provide ample content that she will edit in subsequent watercolors for maximum effect.

One piece in the show, Drink, provides an additional window into the artist’s process; here, she applies the tissue stencil on the paper directly, creating an impromptu collage. 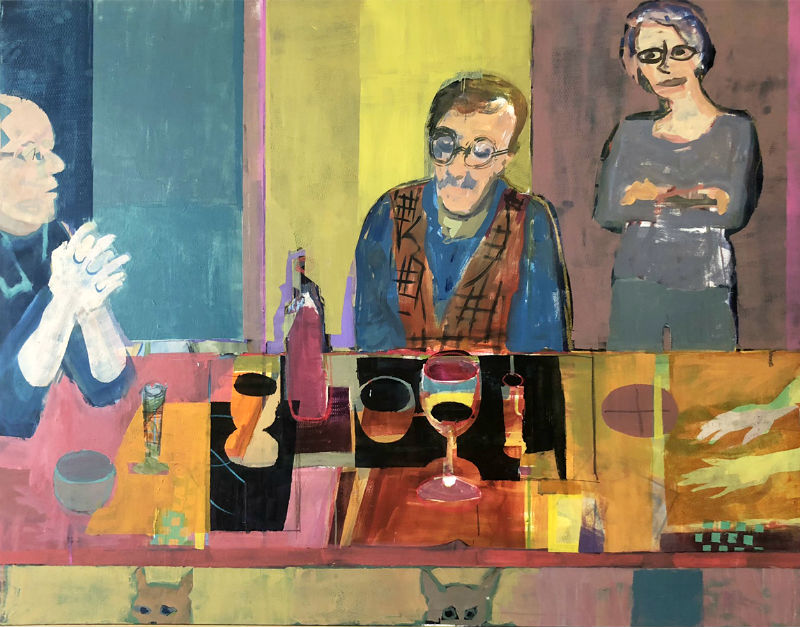 Dinner at Howard’s by Sarah Innes, oil on canvas.

A large painting, Dinner at Howard’s, hangs in the center of the gallery and provides a central focus for the exhibit. She applies color in thin washes of irregular rectangular shapes and organizes the composition around the glasses and bottles that form the still life in the center of the table. Innes’ treatment of the figures is gently comic; the female figure on the right faces two men in conversation, her darkly circled eyes and slight smile a bit skeptical of what’s being said. Two cats under the table peer directly out of the picture, waiting patiently -- or impatiently -- for a little snack.

To the right of Dinner at Howard’s is Duncan and Arlo, Innes’ largest work on paper for Around the Table. Here, a new member of the artist’s changing cast of characters has arrived. Her grandson Arlo shares space with Joey, her son’s chihuahua, on Duncan’s lap, as a new chapter of the family’s domestic tale begins. 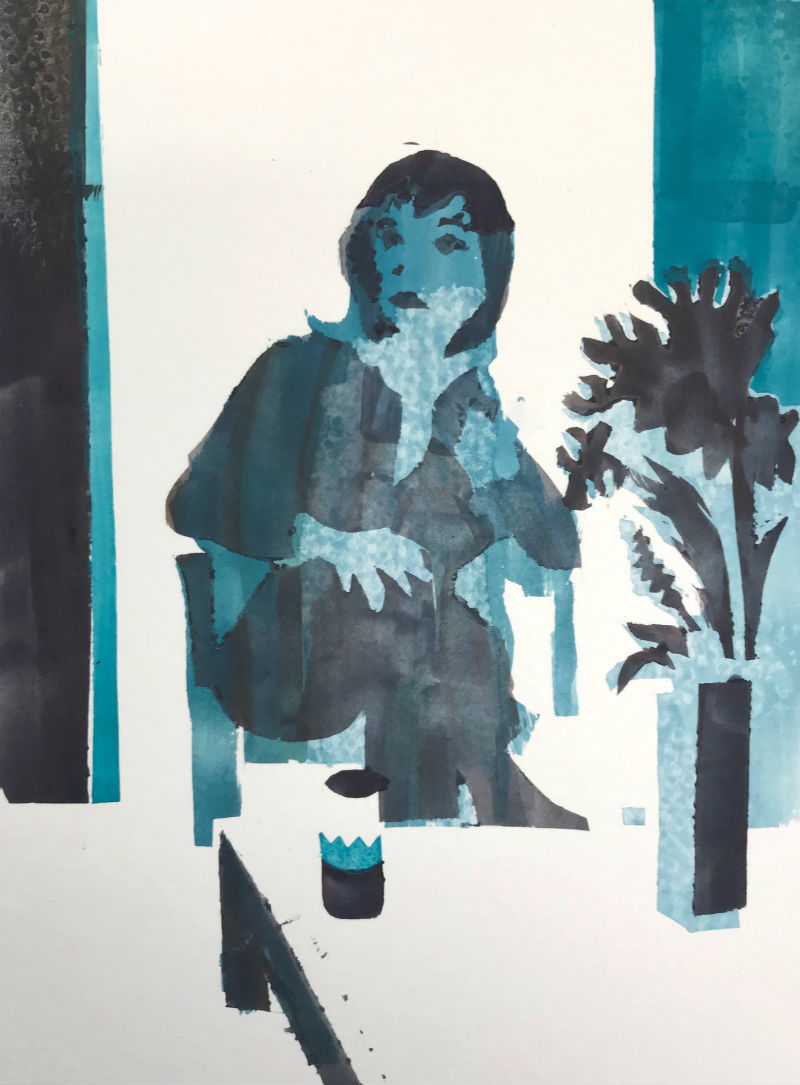 Phyllis by Sarah Innes, watercolor and stencil on paper.

Among the smaller watercolors, one piece stood out for me. Phyllis, a smallish blue-and-black picture of a pensive friend in a solitary moment, captures the intimacy and visual economy that characterizes Innes’ work. She describes the setting and her method:

This year my family was invited to an Easter dinner.  Phyllis was another guest.  As is my custom I drew while we sat having drinks before dinner.  Phyllis and a large bouquet were backlit by the sun coming in a window.  In my studio I made a stencil from the drawing which resulted in this two-color pochoir print.

The 12 watercolors, two pen-and-marker sketches, and the large oil painting in Around the Table are only a small part of Innes’ much larger body of work, now piled and filed in her Ann Arbor studio, waiting for a larger venue to see the light of day.

Sarah Innes’ artworks reward time and attention, two commodities that are in short supply in our age of attention deficit disorder. She convincingly makes the argument, though, that there is great value in art that is more subtle and personal and celebrates life in the intimate details that make up a meaningful whole.

Sarah Innes' "Around the Table" is at Ann Arbor Art Center through July 23.

I love her intimate settings…

I love her intimate settings! It reminds so much of her family gatherings... as well as the importance of friends... especially around the table.
Congrats on a fine showing of just a "little bit" of your work.